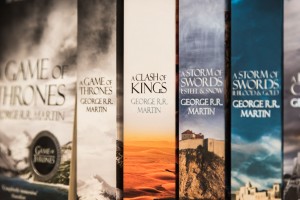 For 20 Northern Illinois University students, “Game of Thrones” isn’t merely the most entertaining show on television—it’s also among the most thought-provoking classes on campus this spring.

At the suggestion of a student, two NIU professors developed an honors seminar course that analyzes the critically acclaimed series set in the Middle Ages.

Adapted from fantasy novels by author George R. R. Martin, “Game of Thrones” will kick off its fifth season on Sunday, April 12. It is HBO’s most-watched series ever and might also be the network’s most controversial, sparking debate over excessive use of violence and nudity.

There also is an undeniable power behind the throne for students taking the course on the show. It has served as a springboard for learning and discussion on sophisticated topics, including:

The value of TV inspired by literature.

The rise of long-form television.

The influence of modern culture on depictions of the past.

Cutting-edge and controversial representations of gender, sexuality and violence—and what they say about our modern culture.

“It’s one of the best courses I’ve ever taken,” Tim Brandner says. “I absolutely love it.”

The 21-year-old senior from Bartlett is studying political science, but he says he has always been a history buff and is a longtime fan of “Game of Thrones.” Now he has a much deeper appreciation for the series, as well as for the business and politics behind filmmaking. The course also helped him become a more astute viewer.

“I have a much better eye for watching TV and movies,” Brandner says.

Officially titled “ ‘Game of Thrones,’ Television and Medieval History,” the class is taught by Valerie Garver, a history professor who has written a book on women in the Middle Ages, and Jeff Chown, a documentary filmmaker and Board of Trustees professor emeritus of media studies.

But it was art history major Jennifer Wegmann-Gabb of Woodstock who planted seeds for the class.

After taking one of Chown’s courses on the TV series, “Mad Men,” and working as a research assistant to Garver, she suggested they team up on “Game of Thrones.”

“Then they got together and worked their magic,” Wegmann-Gabb says.

“There’s a great interplay between the two,” she adds. “Dr. Chown really understands the television aspect, and Dr. Garver comes in with a completely different point of view. You get this great dialogue about how our modern culture and media looks back at this historical period. Either one of the professors could teach the course alone, but having both with their different perspectives makes for an amazing and special experience.”

“Game of Thrones” creates a fictional fantasy world, complete with fierce fire-breathing dragons, but it draws heavily on medieval history and was inspired by the 15th-century Wars of the Roses.

Garver prompts students to examine whether the show’s depictions of such things as medieval childhood, womanhood, sibling relationships, family bonds and people with disabilities are realistic, given what historians know about the time period.

“ ‘Game of Thrones’ doesn’t claim to be an accurate representation of history,” Garver says. “But it ends up conveying some aspects of the Middle Ages, such as family relationships, far better than do other popular sources that purport to be historically accurate. Disability is another example. The show does a good job of showing that if a person in the Middle Ages had a disability, they often still had a function in society, some type of work role. Some historians theorize disabilities would have been more common during that time because injuries and disease were so difficult to treat.”

The series’ intermingling of authentic history, dramatic technique and 21st-century pop culture is a natural leaping off point for classroom discussions.

“Our analyses of ‘Game of Thrones’ cause students to confront the past in a way that constantly reminds them of its effect on the present,” Garver says.

“For instance, take the idea of marriage, which became a sacrament in 1215. This idea is still around—and still important. But in the Middle Ages, elite women got married very young. In the show, there’s an example of this with an older man and teenage girl. It could have been repugnant to a modern audience, but the show handled it deftly. In the Middle Ages, no one would have blinked. It still tells us in a stark way how things have changed.”

Wegmann-Gabb, a senior who plans to study medieval art in graduate school, likes the way the show brings a gritty reality to a fictional world. “Knights are not always knights in white shining armor,” she says. “Sometimes they do some horrific things.”

But depictions of medieval women, she adds, are only sometimes on the mark.

“In the characters Sansa Stark or Margaery Tyrell, you definitely see more of a historical basis. But in a character like Arya Stark, it’s very much a modern depiction. You would not find a young girl in the medieval period fighting with men and holding her own.”

Professor Chown says such characters are crafted as “modern-girl action figures” to satisfy audience appetites for female leads ala the “Hunger Games” or “Buffy the Vampire Slayer.” However, the class also has discussed historical antecedents of women capable of violence and action, such as Joan of Arc.

While Chown himself loves history and has made historical documentaries, his primary contribution to the course is his deep knowledge of television, filmmaking and media.

“I am curious about HBO as a major media corporation that is changing the way we consume television,” he says. “Our students have no idea what it is like to watch network television as I grew up with it—locked into time slots, having to watch commercials. HBO is at the cutting edge of why it’s different. The network is making its products available in a number of ways, including a new streaming service meant to compete with Netflix. And its shows are not subject to FCC censorship rules, so HBO is able to present adult content that is more sophisticated and challenging.”

Critics of “Game of Thrones” cite its pervasive brutal sexuality, including the rape of a noblewoman last season that set off protests on social media. Its frequent use of nudity and sex even resulted in the coining of the term “sexposition,” which describes the technique of providing narrative or plot development against a backdrop of extraneous sex meant to keep eyeballs glued.

“If (a filmmaker) wants to capture a character’s vulnerabilities, sometimes showing them naked does that,” Chown says. “But does the camera linger too long? These are the types of questions we ask in class. The answers are subjective.”

Chown also wants students to think about what the show’s popularity says about modern society.

“I find it interesting to ask the question: Does art reflect who we are or does it shape new opinions about questions of morality?” he says. “I’m very interested in how television culture defines us. This is a leading popular show that seems to be set in a fantasy realm, but it talks about things like torture at a time when we are trying to come to terms with a war fought by our government, which used such tactics as waterboarding.”

Both Chown and Garver were hoping to attract a diverse group of students, including some who typically wouldn’t take film or history courses.

Alex Weier of Carol Stream is a junior accounting major. A fan of “Game of Thrones,’ he jumped at the chance to take the seminar and fulfill an honors program credit.

“I didn’t know what to expect going in, I had never taken a similar course,” Weier says. “But I love it. You don’t realize how much literature, arts, pop culture and history affect something as simple as one episode. “

Weier says he never expected to enjoy the medieval history portion of the course as much as he does. But his larger interest is in the media side.

“It’s incredible how HBO has been able to, almost time and time again, one-up itself with shows that push the boundaries a little more. Definitely some people in the class feel it’s gone too far. I think yes and no. I understand it’s gone far, but I understand why they’ve done it.”

He thinks the show’s popularity can be traced to the fact that people can relate to its themes.

Garver and Chown plan to teach the honors course again next spring, but interested students will need to be as vigilant as House Stark. When registration opened for this spring’s course, its 20 slots filled within two hours.