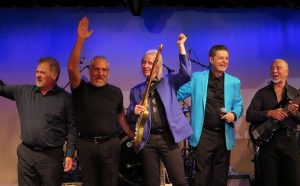 The Buckinghams, a standout of the 1960s Chicago music scene, are still performing. (Photo courtesy of the Buckinghams)

Fans of music of the 1960s and 1970s have the chance to enjoy the 10th anniversary of the Happy Together Tour, an annual fall season kickoff at Aurora’s Paramount Theater at 8 p.m. on Friday, Aug. 16.

A handful of tickets remain for the 2019 tour, featuring six headline artists responsible for many of the biggest hits of the era: The Turtles, Chuck Negron (formerly of Three Dog Night), Gary Puckett and The Union Gap, The Buckinghams, The Classics IV and The Cowsills.

These are all the real bands performing their famous hit songs. Tickets are priced at $59.50 and the show begins at 8 p.m..

The Paramount is also hosting a separate season kickoff party from 5-7 p.m. in the Meyer Ballroom, located in the North Island Center directly across the street from the theater.

Admission to that event is $25 and features drinks and food from local restaurants and caterers. Proceeds benefit children and families through the Dreams Do Come True program.

The Happy Together tour brings together classic performers from the 1960s-70s, including signature headliners The Turtles, with over 40 million records sold worldwide, and hits including “Happy Together,” “She’d Rather Be With Me,” “Elenore,” “It Ain’t Me Babe,” “You Showed Me” and many more.

Negron is back on the tour due to popular demand and brings Three Dog Night’s biggest hits to the stage, including “Joy To The World,” “Mama Told Me Not To Come,” “Shambala,” “One” and “Easy To Be Hard,” among others.

Gary Puckett and The Union Gap is known for hits like “Young Girl,” “Over You,” “Woman, Woman,” “This Girl Is A Woman Now,” “Lady Willpower,” “Don’t Give In To Him” and more.

The Buckinghams pack power into ‘60s pop rock. Their #1 song “Kind of a Drag” is the standout favorite

that first made them famous. Since then came seven national chart hits, 15 singles and eight acclaimed

The Classics IV were  formed in Jacksonville, Florida in 1965 and is often credited for establishing the  soft southern rock sound. Formerly led by singer Dennis Yost, the Classics IV are known mainly for the hits “Spooky,” “Stormy” and “Traces,” releases 1967 to 1969.

The Cowsills have been dazzling crowds the last three years on the tour with their effervescent brand of contagious pop magic. Bob, Paul and Susan Cowsill are a family singing group and the original inspiration for TV’s The Partridge Family.