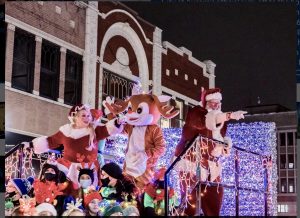 Santa and Mrs. Claus will usher in the holiday season with the illuminated parade that begins at 6;30 p.m. on Saturday, Nov. 19 in downtown Aurora . (Photo courtesy of Aurora Area Convention and Visitors Bureau)

The city of Aurora’s official kick-off to the holiday season begins at 6 p.m. on Friday, Nov. 18 with the Winter Lights event in downtown Aurora.  The parade steps off at 6:30 p.m. at Downer Place, from Water Street to River Street.

Free parking will be available at all public lots downtown but the of Aurora Area Convention and Visitors Bureau advises to arrive early, as streets will begin to close at 6 p.m.

Santa and Mrs. Claus will usher in the holiday season with the illuminated parade that will be filled with reindeer, elves, special guests and other holiday favorites.

Following the parade, Santa and Mrs. Claus, along with Mayor Richard Irvin and the newly-crowned Little Mr. and Miss Aurora, will lead the crowd in a countdown to flip the magic switch and illuminate the city’s holiday tree.

After the tree lighting, the downtown Aurora sky will be brightened by a grand fireworks display along the banks of the Fox River, sponsored by the Chicago Premium Outlets.
The fireworks are best viewed from the East Downer Place Bridge.
After the fireworks, Stolp Avenue, between Downer Place and Galena Boulevard, will be filled with food vendors, hot cocoa, artisan vendors, roaming costumed characters, and musical entertainment at Millennium Plaza.

The streets of downtown Aurora will be filled with costumed characters, festive photo-ops, food trucks and much more.

Mugs are on sale now. Buy a mug and a button to participate.

New this year to coincide with Christkindlmarket at RiverEdge Park, Aurora Downtown will feature a Downtown Holiday Trolley on Saturdays from noon to 3:30 p.m. from Nov. 19 to Dec.17. The trolley, generously sponsored by Invest Aurora, will make four stops while making a loop through downtown Aurora, beginning and ending at Aurora Transportation Center on Broadway.

For more information on these events, contact the city of Aurora Special Events Division at