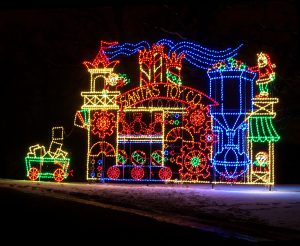 Aurora’s Philips Park will be aglow with more than 420 animated displays over a one-mile course.

The City of Lights has first dibs on making this holiday season shiny and bright.

But, Aurora is not alone. All across this region, festivals, parades and large light displays synchronized to music are lined up to ensure residents have a very, merry holiday season.

The holiday season kicks off with Aurora’s Winter Lights festival on Friday, Nov. 16, at 6:30 p.m.
This family-oriented event, held in downtown Aurora, will be filled with free holiday fun for the entire family. The event includes a holiday parade and a special appearance by Santa and Mrs. Claus, followed by a fireworks display along the banks of the Fox River.

Aurora’s twinkling downtown streets will also feature costumed characters and festive photo-ops. The city’s official holiday tree, located in front of Grand Army of the Republic Museum, will be lit by Mayor Irvin and Little Miss Aurora and Little Mr. Aurora, along with an award presentations for the winners of the Downtown Window Decorating Contest.   After the fireworks, Santa and Mrs. Claus will listen to Christmas wishes at the Wyckwood House.

Other area events on tap to celebrate the holiday season include:

Aurora’s Philips Park will be aglow with more than 420 animated displays over a mile in length as part of Aurora’s Festival of Lights, sponsored by the Rotary Club of Aurora.

The Rotary Club of Aurora began the event in 2006 and through a partnership with the City of Aurora has brought the holiday season to Phillips Park, 1000 Ray Moses Drive, every year since.

New displays this year include Old Man Winter blowing snowflakes into the park and an animated fireworks display.

Each home on Aurora’s Lehnertz Avenue near Garfield Park between Sheridan and Michels Streets is decorated with a portion of the original Christmas story and includes wise men, camels, shepherds, and the manger scene. It’s a tradition that began in the 1950s, making it the oldest traditional Christmas display marking Jesus’s birth in Illinois.

The event kicks off with the blessing of the crib at 6 p.m. on Dec. 9. The lights go on at 5 p.m. Christmas carols begin at 5:15pm and the music continues until 10:30 p.m. The crèche can be viewed nightly through Jan. 1.

It is suggested that vehicles enter Lehnertz Avenue via Sheridan Street, follow through Lehnertz Circle and exit via Ohio Street.

From hayrides to holiday crafts to visits with Santa, Batavia’s Riverwalk will celebrate the season on Sunday, Nov. 25 beginning at 5 p.m.  Other events include a performance by the Batavia Community Band, a community sing-a-long led by Craig Foltos, Foltos Tonsorial Parlor, and the ceremonial tree lighting.

The first three weekends in December, Blackberry Farm, 100 S Barnes Rd, Aurora, celebrates the season with approximately 60,000 glittering lights and festive activities including the presence of Santa and his elves as the decorated train runs continuously around Lake Gregory.

The cost is $7 per person and tickets are available online through the Fox Valley Park District beginning on Nov. 13.

The residential childcare facility which has served as home for thousands of children and teens in need, will be sparkling this holiday season with more than 80 large lighted holiday displays.
Beginning on Friday, Nov. 23 and running through New Year’s Eve, now in its ninth year, will run nightly from 5 to 9 p.m. until New Year’s Eve.

Santa Claus will appear on Dec. 8, 9, 15, 16, 22 and 23. A $10 admission fee per vehicle goes to support Mooseheart and includes the holiday light show and also a chance to visit with Santa and enjoy crafts, holiday music, hot chocolate and Christmas cookies in the school gymnasium.

Winner of the 2013 The Great American Light Fight, the Larsen Christmas Light Show in Campton, will dazzle again this holiday season with up more than 100 million lights that will dance to holiday music.

The show will begin on Thanksgiving night. Each show which is set to music runs approximately 15 to 25 minutes. The display is at the home of local landscaper Brian Larsen at 42W891 Beith Road.

This year, all shows are interactive. Wristbands and wands are available online at http://www.epiclightshows.com/shows.html. The bracelets are $5 each and the wands are $10 each.

As part of a two-day celebration, St. Charles transforms to a winter wonderland for the holiday season. The event kicks off on Friday, Nov. 23 at 5 p.m. with the Lighting of the Lights. On Saturday, at 5:30 p.m. the annual Electric Christmas parade is held on Main Street in St. Charles.

On Friday, Nov. 30, downtown Oswego comes alive with holiday spirit during its annual Christmas Walk. As part of the event, guests can help light the official tree, save it from the Grinch, take a ride on a horse-drawn carriage, ride the Toyland Train through downtown, and welcome Santa to Oswego during the Silent Light Parade.

On Saturday, Nov. 17 at 5:30 p.m. Yorkville’s Holiday Parade begins at Eastern end of Hydraulic Ave near the Riverfront Playground.

Beginning Sunday, Nov. 10 through New Year’s Eve nightly from 5 to 8 p.m., the Bolingbrook Promenade, located on Boughton Road just west of Interstate-355 celebrates the season with a light show comprised of more than 250,000 LED lights choreographed to the music of the Trans-Siberian Orchestra. Admission is free.

On Dec. 1 and 2, the Village of Lisle transforms into a winter wonderland including a tree lighting, ice carving, wagon and trolley rides, and thousands of Luminarias in the downtown streets.

Returning for its sixth season, the Illumination: Tree Lights at The Morton Arboretum, 4100 IL-53, Lisle, will transform 50 acres of the Arboretum’s trees to glow in hues of blue, green, purple, and magenta. Along a one-mile path, visitors will experience a set of unique ways to see trees.

New this year, Illumination will feature a collaborative installation arts collective, HYBYCOZO, or the Hyperspace Bypass Construction Zone, a series of large scale installations and artworks that investigate geometry through light and shadow, created by artists Yelena Filipchuk, a native of Northbrook, and Serge Beaulieu.

Each of these giant sculptures—measuring between 9 and 12 feet tall—feature intricate, laser-cut patterns calling to mind nature, harmony, and trees.

In the Woodland Wonder experience, visitors will step into a grove of trees while enveloped with thousands of luminous, rotating points of light.

The event will run from Saturday, Nov. 17 through Tuesday, Jan. 1, 2019, and frequently sells out in advance.

Tickets are available for specific times, beginning at 4:30 p.m. Admission ends at 8:30 p.m. Tickets range from $7-$23 depending on age, time and Arboretum membership status.

Lombard’s Lilacia Park, 150 South Park Avenue, glitters for the season beginning on Saturday Dec. 1 through Wednesday, Jan. 2, from 4:15 to 9 p.m. nightly as part of the Lombard Park Districts, Holiday Lights. On special nights Santa will make an appearance and crafts will be on hand. More information is available at http://lombardparks.com

On Saturday, Dec. 1 at 7 p.m., the Little Friends Holiday Parade of Lights will step off from Jackson Avenue at Mill Street.

Following the parade Santa and Mrs. Claus will visit with kids inside the Santa House at Jackson Avenue and Webster Street on the Riverwalk.

Beginning on Friday, Nov. 23 and running through Dec. 29, the Festival of Lights at Crosley Zoo, 1356 North Avenue, Wheaton will run nightly from 3 to 9 p.m. With more than 20,000 twinkling light displays. Santa will be on hand at the zoo on Saturdays before Christmas from 10 a.m. until 2 p.m. Christmas trees will be available for purchase.