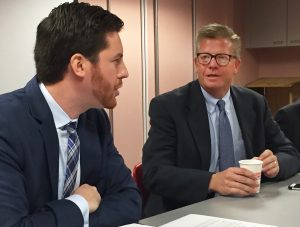 Last week’s roundtable discussion on senior health care at the Woodstock Public Library was billed as a strictly nonpartisan event.

But with the midterm elections looming, it was hard to escape politics and Rep. Randy Hultgren (R-14th) was quick to pitch his views and reassure senior citizens that he was in their corner on Medicare and other health issues.

“There’s a lot of talk of change, threat. Don’t believe it, it’s not true,” said Hultgren, locked in a tight reelection race against Democratic challenger Lauren Underwood. “There is a strong bipartisan commitment to protect Social Security and Medicare.

“My sense is that a vast, vast majority of my colleagues and I are absolutely committed to maintaining Social Security and Medicare just as it is.”

But broader health-care issues and repeated votes to repeal the Affordable Care Act have left Hultgren open to attack, particularly from Underwood.

Underwood’s opposition was sparked by what she called Hultgren’s broken promise after pledging at a 2017 town hall meeting to preserve insurance for people with pre-existing medical conditions.

When Hultgren voted for a Republican replacement that did not include such protections, Underwood decided to run against him.

She captured the Democratic nomination with 57 percent of the primary vote and recent polling gives Hultgren only a slight edge for reelection in a district he carried by nearly 19 percentage points in 2016.

“Voters are engaged,” Hultgren said, following the Woodstock event. “They’re angry, which is leading to being active. They’re going to come out and vote.”

But Hultgren said he also has a strong case to make with an economy that continues to hum and low unemployment.

“It’s results,” he said. “Keeping promises, doing what we said. We see this great growing economy, growing optimism of people, a right-sizing of regulations (and) appropriate accountability.”

After skipping opportunities to debate his Democratic foe, Hultgren and Underwood were set to meet on Tuesday in a Yorkville forum, the candidates’ lone joint appearance.

“There’s a very clear difference between Lauren Underwood and myself of our view of the role of government,” he said. “She is, by her own admission, a progressive who believes in big government. I’m a conservative and believe in more limited, smaller government. So I think there’s a really clear decision that people are going to be able to make.”

Last week’s roundtable discussion was hosted by the American Hospital Association, which opposes a proposed federal rule change that could cut up to $730 million in funding for hospitals providing care via hospital-based outpatient clinics.

The AHA claimed a proposed 60 percent cut would have the greatest impact on seniors, minorities and people who live in rural communities. Changes would be made by the Centers for Medicare and Medicaid Services, part of the U.S. Department of Health and Human Services.

Hultgren said he was against the change, which could take effect without Congressional approval. Hultgren joined nearly 90 House colleagues who signed a letter in opposition.

“We don’t want something pushed through without fully addressing our concerns,” he said.