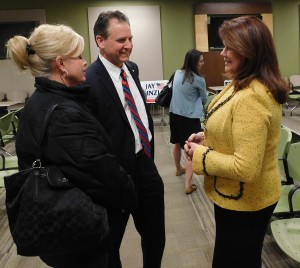 Unlike the charged partisan atmosphere in Washington D.C., a congressional candidate forum hosted last week by the Kane County League of Women Voters was cordial and focused on issues.

Six of seven invited candidates running in two west suburban districts — five Democrats and a Republican — stated their respective cases at a forum held in a St. Charles traffic courtroom with just days remaining before the March 15 Illinois primary.

The lone GOP candidate — Sixth District challenger Jay Kinzler — even cracked a joke about being outnumbered.

“At times I felt lonely up here as the only Republican,” he said.

“We’re woefully underrepresented in Washington to the point where you and I aren’t represented at all,” said Jim Walz, seeking the Sixth District Democratic nomination. “It seems like only the big money interests get all the attention and that doesn’t seem right to me.”

Amanda Howland, a 14th District Democrat, attorney and mediator, said the tone also has to change.

“The lack of civility in Washington D.C. is absolutely outrageous, I saw it when I was there three weeks ago,” she said. “No one will talk to each other and everybody’s pointing the finger. They’re so busy blaming the other side that we’re not getting anything done.”

Fourteenth District incumbent Randy Hultgren has served two terms and is unopposed in the Republican primary.

Positions diverged as the candidates delved into other issues.

Hosta said economic policies have resulted in many U.S. jobs moving overseas and have seriously hurt the middle class.

“Forty to 50 percent of our middle class has been pushed into poverty,” he said. “We need to bring out jobs back.”

Marshall said our overextended military needs to be pulled back.

The 14th stretches from the Joliet area north to the state line and covers most of McHenry, northwest Lake, western Kane, Eastern DeKalb, northwest Will and nearly all of Kendall counties.