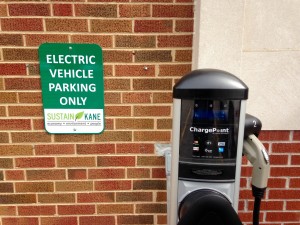 Kane County has two electric vehicle charging stations: one at the county courthouse and the other at the county government building, both in Geneva. (Photo courtesy Kane County)

Consumer behavior isn’t necessarily something that is changed overnight.

Familiar technology — even if it’s decades old — and “this is the way that we’ve always done it” arguments tend to stifle even the tamest or most scientifically backed progressive ideas. But not always, and not always for long.

With the help of public figures and municipalities (national, state and local), measured, consistent progress can be made to further educate the public on topics such as electric cars and clean energy.

And rebates and tax incentives certainly don’t hurt either.

All-electric vehicles (EVs) are as straightforward as the name suggests — vehicles that run entirely on electricity — and plug in to charge up the battery, which stores electricity to power the electric motor, according to the Alternative Fuels Data Center, which is a resource of the U.S. Department of Energy’s Clean Cities program.

Of the 12,164 non-private electric car charging stations and the 30,566 charging outlets throughout the country, Illinois claims 387 stations and 826 outlets, the AFDC reports. The majority of those stations are on the eastern side of state and there are very few charging stations much past Kane County, said Cecilia Govrik, the resource management coordinator in the Kane County division of environmental and water resources.

ChargePoint, which is the world’s largest EV charging network, includes 26,365 charging spots in its global network. And though the Campbell, Calif.-headquartered company doesn’t break its charging locations down by county, its communications director Erin Mellon, said that there are roughly 130 charging spots on the ChargePoint network within Kane, DuPage and Kendall counties. 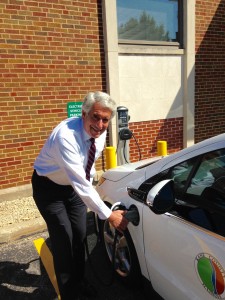 “There are more  400,000 EVs on the road today,” Mellon said. “People may not even realize that a friend or neighbor has already made the switch to electricity. EVs aren’t a trend. They are more affordable, infinitely better for the environment and simply better cars with instant acceleration and the latest tech,” Mellon said.

Get the Word Out

“Many municipalities display stations at county buildings to educate residents and business owners,” Mellon said. “One of the best things a municipality can do to increase adoption is to lead by example with their fleets and workplaces: A driver is 20 times more likely to purchase an EV if they have charging at work.”

And that is just the approach that both Kane and DuPage counties take.

Evan Shields, a public information officer with the DuPage County Board, said the county installed a free EV charging station on its campus in June 2014 through a rebate from the Illinois Department of Commerce and Economic Opportunity.

“Since the station is still relatively new, we’re still tracking the usage to determine if we’d like to build more charging stations in the future,” Shields said. “At this time, there’s no immediate plans for any future stations because we’re still studying the one we have. So far, we’ve had 16 unique users charge up 534 times, saving 356 gallons of gasoline.”

“It was first installed in 2012 under a federal grant as a single plug, and then after about two years, the demand for its use had grown, so it was upgraded to a dual-plug station in 2014,” she said.

The original single-plug station was later installed at the Kane County Government Center in Geneva, but it’s not on the network and is not open to the public. “It’s one that’s used internally for our own government vehicle, because we got our own electric vehicle for the environmental division last April,” Govrik said. 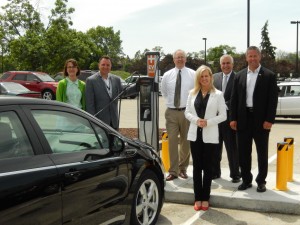 While the dual-outlet station is free now, Govrik said that the county likely will start charging a user fee to cover the operating costs of it by the end of this year.

“Over the past four years, this pilot project has been successful; growth in usage has occurred every year,” she said. “But the money that we use to pay for it comes from internal grant dollars, that if we take that away from general operating for the existing station, we can put that toward a new station and expanding our electric vehicle infrastructure, which is what we plan to do. We plan to install another station hopefully before the end of this year.”

“Our courthouse charging station has been used 1,766 times since its installation, which equates to a savings of 1,086 gallons and a reduction of 3,634 kg in greenhouse gases in the community,” she said.

Govric explained that the Kane County Operational Sustainability Plan, which was adopted in 2013, includes “goals for improving the fuel efficiency of our fleet and expanding infrastructure for alternative fuel vehicles. … The County is committed to reducing its own greenhouse gas emissions and has to build the infrastructure for down the road to keep making those improvements.”

A full list of Illinois laws, incentives and regulations that are related to alternative fuels and advanced vehicles can also be found on the AFDC’s website.