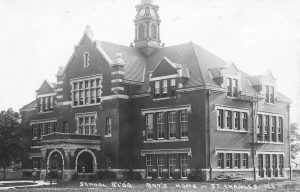 School officials said there have been no public reports of anyone contracting Legionella at the school.

“There has not been an increased reporting of respiratory illnesses to the district,” according to a district news release. “There are no known cases of Legionnaires’ disease among BPS students, staff or visitors.”

School officials said staff learned in an email from the Illinois Department of Public Health and subsequent conference call with IDHP and KCHD on Oct. 1, that swab samples of the Batavia High School cooling tower returned positive results for the Legionella bacteria.

“We have been advised that it is safe for people to be at Batavia High School and have indicated that the cooling towers at BHS are a less likely source of the actual Legionnaire cases. IDPH does not have reason to believe that the potable water in the school, such as sinks and drinking fountains, is unsafe,” school officials said in the release.

The School District news release said the district regularly cleans and tests the cooling towers, and annually, the towers are turned off at the end of the warm weather seasons.

Aidan Carlson, the St. Charles North sophomore football player who suffered a severe brain injury during a recent game, has woken from a coma, friends say on the Aiden’s Angels Go Fund Me page.

The 15-year-old was airlifted to Advocate Lutheran General Hospital, where he underwent emergency neurosurgery, according to school, social media and media reports.

Sean Peters, Aidan Carlson’s uncle, reported Monday that Carlson was able to wake up on his own.

“This is the best news we’ve had all weekend, and we’re happy to share it with everyone,” he said. “We are beyond joyed to see how quickly the community came to aid Aidan and his family. The Carlson’s are so beside themselves with so many emotions right now but they are so incredibly grateful for every donation, prayer, and message they’ve received.”

Family members describe Carlson, who plays linebacker and running back on the St. Charles North sophomore football team, as a young man who came out of his shell when he joined the football team.

“We ask that you please respect our privacy at this time as Aidan is in his recovery,” Peters said on the Go Fund Me Page. “Once again, thank you to everyone who has had Aidan in their hearts, please keep him there as he starts the next phase of his recovery.”

A St. Charles Township man faces as many as 10 years in prison after he pleaded guilty for striking a child with his pickup truck in May and then fleeing the scene without reporting the crash.

Brian J. Quartuccio, 42, pleaded guilty last week for failure to report an accident or injury, a Class 2 felony, and driving while license revoked, a Class 4 felony.

In addition, Quartuccio also violated terms of a sentence of probation for a 2017 offense of driving while license revoked.

On May 12, the victim, a 7-year-old child was riding her bicycle south on Illinois Avenue in the Valley View portion of unincorporated St. Charles Township when Quartuccio, driving a 2003 black Dodge Ram pickup truck struck the victim, causing injuries.

Quartuccio failed to stop and provide aid to the victim, and instead fled the scene. He also failed to report the crash. Quartuccio’s driver’s license was revoked at the time because of a prior DUI offense.

Elgin police are seeking the public’s help in an investigation of a Wednesday-night shooting in a residential neighborhood.

According to the Elgin Police Department Facebook page, officers were notified at around 10:38 p.m. on Oct. 9  that a 23-year-old male had been transported to a local hospital by a friend for treatment of a gunshot wound.

Police said the injury appears to be non-life-threatening.

Preliminary investigation indicates the shooting took place in the 1800 block of Mark Avenue in Elgin. Officers and detectives from the Major Investigations Division are investigating the incident.

Aurora Police are investigating the circumstances of a shooting on the near East side on the evening of Oct. 10.

Just after 7:30 p.m., Aurora Police’s telecom center received multiple 911 calls reporting a person had been shot in the 400 block of South LaSalle Street. Officers found a 29-year-old man suffering from multiple gunshot wounds. Aurora Fire Department paramedics arrived on the scene and transported the man to an area hospital.

The man was then airlifted to a Chicago area hospital for additional treatment, where he is now listed in critical but stable condition.

Anyone with any potential information about what happened is asked to call Aurora Police’s Investigations Division at 630-256-5500 or call Crime Stoppers at 630-892-1000 where you can remain anonymous.

During the interview, Kennedy discussed topics such as leadership, faith, family, role models, what America means to her, women’s empowerment, what it means to be an Ambassador, and being the only surviving child of John F. Kennedy.

“When I was the Ambassador to Japan, Americans often approached me and recited my father’s presidential inaugural address from 1961,” said Kennedy. “This always made me proud because the quote – ask what you can do for your country – is emblematic of the service and generosity that makes America special.”

For the first time, the World Leaders Forum community event was held off campus to accommodate growing interest from the surrounding community.

The St. Charles History Museum’s next temporary exhibit, The Good, the Bad, the Ugly: The Boys School of St. Charles, will explore the history of the local reformatory school and its impact on the boys who attended it.

In 1902, the Illinois State Home for Delinquent Boys (today existing as the Illinois Youth Center) was established by John “Bet-a-Million” Gates, Samuel Allenton and Henry Weaver. The men believed that delinquent young men could be rehabilitated and reintegrated back into society in a home-like setting that focused on schooling, hard work, and discipline.

While the school helped some boys find their way, others remained unchanged, choosing to continue a life of crime. One such example is the famous Midwest Gangster Lester Gillis, also known as “Baby Face Nelson”, who resided at the school during his teen years and went on to become Public Enemy No. 1 in October of 1934. The exhibit will explore some of the most interesting stories from the school’s 100-plus years of history.

“While the Boys School has an interesting reputation in St. Charles, it is important to note the School was based on the philosophy of rehabilitation and the teaching of life skills, not punishment,” said Executive Director Alison Costanzo. “We look forward to sharing some of the fascinating stories of this historic facility.”

The exhibit will be on display until the end of the year and will open with a special opening reception from 5-7 p.m. on Oct. 25. For more information, visit www.stcmuseum.org or contact the Museum at (630) 584-6967 or info@stcmuseum.org.

Kane Senior Council is in need of volunteers to deliver meals to frail and homebound seniors in Kane County.

“While Kane Senior Council is a new organization, we have deep roots in the senior community,” she said. “In fact, our roots go back to 1975 when the DuPage Senior Citizens Council began advocating and providing services for seniors in need in DuPage County.”

Meals on Wheels are delivered from 10:30 a.m. to 1 p.m. five days a week, Monday through Friday. Deliveries typically take an hour.

Requirements to volunteer are a valid driver’s license, current car insurance, a background check and to attend a volunteer training.

In addition to Meals on Wheels drivers, KSC is in need of volunteers for its Community Dining locations to help serve food to those seniors that attend Community Dining.

Naperville Park District, in collaboration with the Naperville Healing Field Committee, will host the community’s fourth Healing Field of Honor at Rotary Hill, located at 443 Aurora Ave, from Nov. 1-11.

Displaying 2,019 American flags on Rotary Hill during this event creates a tribute to our military and their families and also raises money through Operation Support Our Troops-America to assist veterans and their families.

Rotary Hill has hosted the Healing Field of Honor in 2009, 2012 and 2015, raising funds for Fisher House at Edward Hines, Jr. Veterans Affairs Hospital and the Allen J. Lynch Foundation, which supports research on traumatic brain injury and post-traumatic stress disorder.