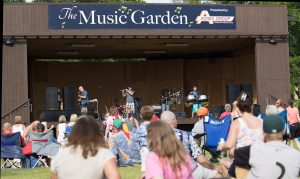 Pre-game concerts at Kane County Cougars games will start at 4:30 p.m. on Saturdays from June until September and are free to fans with the purchase of a game ticket.

The new Cougars Music Garden is the Geneva-based team’s latest effort to give their fans “more than just a ballgame,” according to a team official.

“We thought that everyone loves live music especially outside on a summer night,” said Curtis Haug, the Cougars Vice President and General Manager.

That led to the creation of the music garden, a dedicated space in the FifthThird Bank ballpark complex that was dedicated on June 11 with a ribbon-cutting ceremony and followed by an inaugural Saturday pre-game concert.

Haug said that the music garden was a joint effort between the Cougars and their longtime partner, the Acres Group, to give fans a fun, full-day experience when they come to Saturday games.

The ribbon-cutting was attended by team owners and board members as well as everyone who helped to construct the garden, Haug said. The ceremony was followed by a performance by the 1980-90’s hip hop tribute group, Too White Crew.

“The music pavilion is a wonderful addition to the ballpark,” said Cougars Owner, Cheryl Froehlich in a news release from the team. “We are thrilled to be able to provide this beautiful area for our fans, as well as the performers, to enjoy our Saturday Concert Series for many years to come.”

Haug said the Cougars are hoped to host 8-10 pre-game concerts throughout the season as well as additional concerts on non-game days.

Pre-game concerts will start at 4:30pm on Saturdays from June until September and are free to fans with the purchase of a game ticket. 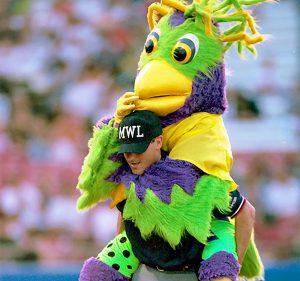 Enteratainment between innings is just as much as part of the action at all Kane County Cougars home games.

Since the unveiling, the music garden has hosted Mr. Myers Band, a popular Jimmy Buffet cover band, and Big Band Boom!, an 18-piece modern jazz ensemble, according to the Kane County Cougars website.

Haug said that the Cougars had often rented stages to host pregame concerts in the past, so building a permanent music pavilion seemed like a logical next step. The staff came up with the idea for the music garden when discussing new ideas for promotions at staff meetings in October.

Summer concerts in the music garden are only one way that the Cougars strive to go the extra mile so that everyone who comes to games has a blast.

“We’re constantly entertaining the fans between innings with promotions on the field and on our new video board,” said Haug. “Everybody’s allowed to run the bases after the game, we have unbelievable firework shows that we will do 27 times this year. We’ve got the pre-game concerts, we’ve got some great acts that come in and entertain our fans, the food is outstanding and the beer is cold – you can’t beat it.”

The Cougars also have themed nights where fans can attend games dressed in costume and enjoy different performances as well as weekly specials on food and drinks.

During run up to the Fourth of July holiday, staff planned a week full of events to celebrate the holiday during the team’s home stand featuring the Burlington Bees and the Quad Cities River Bandits.

The week-long fun included giveaways and daily deals such as Half-Price Hump Day and Thirsty Thursday where select beers cost only one dollar, Haug said. They also held a superhero/Comic-Con themed night on Friday and Military Appreciation Day on Saturday featuring a display of Military vehicles, he said.

Haug said that the Cougars were also proud to honor current and past members of the U.S. Military by dedicating the day to them. The team and staff will also be wearing special Military photo jerseys that they have created for the event.

“These jerseys have photos of Military personnel that have been submitted by fans all over the area and all over the country,” said Haug. “Some of them are still alive and some of them have passed but there’s over 150 photos on this jersey.”

The Cougars are a minor league team affiliated with the Arizona Diamondbacks and play at the lowest rung of professional baseball. At the Class A level the focus is on develop their skills to move up the professional ladder, Haug said.

“This place, being one of the top minor league baseball teams in the country, really sets the bar when it comes to atmosphere and the fans that are in the seats cheering them on,” Haug said. “That whole thing is so important for the players’ morale.”