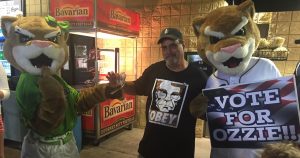 Ozzie, the Kane County Cougars mascot, handed prizes to employees instead of patrons at a corruption-themed game. (INN Photo by Cole Lauterbach)

The Kane County Cougars raised eyebrows Aug. 18 with a political-corruption-themed baseball game. Construction cones hampered travel along the main concourse, a tollway-styled I-Pass notice adorned the entry to the restrooms, and Cougars’ mascot Ozzie handed out prizes to team employees instead of patrons.

Communications Coordinator Jacquie Boatman said even though the theme is meant to be lighthearted, the only way to fix the corruption is to vote.

“The only way we’re going to make change is to vote people into office who are going to help get things set the right way around here,” she said.

Attendee Bob Anzak moved from Chicago to Texas in the 1970s. He said Illinois’ political corruption is not lost on people from other states. 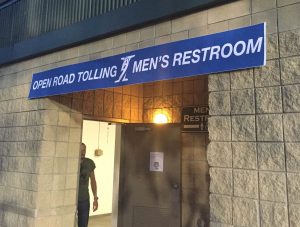 “Illinois is noted nationwide for corruption, poor politics and for going broke,” he said. “This is the legacy that you leave with a lot of the other states.”

“There’s a lot of shady politicians coming out of the state,” he said. “It’s a great place to have this event.”

Kane County had a voter registration table in the concourse, but Boatman said she didn’t see any local politicians in attendance.

The Cougars lost to the Class A Midwest League game to the Wisconsin Timber Rattlers. 7-6.