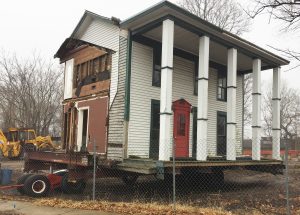 A historic house at 122 E. State in Geneva has been lifted off its foundation and ready for move to a new location. The house dates back to 1839 and is reportedly one of just 10 building in Geneva that predate 1840. (Photo by Jack McCarthy / Chronicle Media)

A proven leader in the industry, Gay has held several executive positions in both state and local government organization and brings a wealth of experience and knowledge to Aurora.

“As we conducted a comprehensive search for a new visionary leader to take the reins at Invest Aurora, we knew someone with proven results who could hit the ground running on day one was mandatory,” said Mayor Richard C. Irvin. “Not only does Bryan come to the table with that experience, he also brings innovative ideas and a network of connections to benefit Aurora.”

In addition to his countywide work, Gay has worked at the state level as a region manager for the Illinois Department of Commerce and has vast experience at the local municipal level in his roles as planning commissioner for the cities of Darien and Alsip; and the head of economic development for the cities of Crest Hill and Mokena.

He has played pivotal roles in addressing policy issues critical to the needs of business, managing budgets, planning events and coordinating marketing while implementing and managing new projects.

As the president and chief executive officer of Invest Aurora, Bryan will oversee all internal operations while working closely with his team to stimulate the local economy by leveraging public and private partnerships that will attract and expand business ventures in Aurora.

Gay is a graduate of Drake University and the University of Oklahoma Economic Development Institute.

A Geneva man was charged with Aggravated Assault — Use of a Deadly Weapon and six felony drug charges on  Dec. 18 following a driving altercation in the parking lot of the St. Charles Meijer store.

“This was a senseless incident that happened in a crowed parking lot,” St. Charles Deputy Chief Erik Mahan said. “Thankfully no one was seriously injured or killed.”

According to a St. Charles Police Department news release, Robert J. Brouillette, 23, of the 600 block of Illinois Street in Geneva, was charged with drug and weapons offenses.

Officers from the St. Charles Police Department were dispatched at 2:11 p.m. Tuesday to the report of a driving altercation in the parking lot for Meijer, 855 S. Randall Road, police said. Callers reported that one person involved had a handgun and that a physical altercation was taking place.

When officers arrived, they found one male subject on top of Brouillette attempting to keep him on the ground. The subject told officers as they arrived that Brouillette had a gun.

Officers took control of Brouillette and did recover a 9mm handgun, police said.

Through a subsequent investigation, police learned that the two individuals encountered one another while driving through the parking lot.

Brouillette’s vehicle and stopped his vehicle near where Brouillette had parked.

Brouillette then allegedly approached the vehicle and pointed a gun at the driver. A physical altercation ensued, resulting in the driver holding Brouillette on the ground until police arrived.

A Carpentersville man faces criminal charges for his role in a May 2018 traffic crash that resulted in the deaths of 32-year-old Rocio Hernandez-Balderas of Carpentersville and her unborn child, and injuries to two others.

The Kane County State’s Attorney’s Office has charged 19-year-old Frank Ruiz with the offenses of:

Kane County prosecutors allege that on May 19 Ruiz was driving at an excessive speed and disobeyed a traffic control device, failed to reduce speed, causing the deaths of Hernandez-Balderas and her unborn child and injuring two others.

He appeared Saturday, Dec. 15, in Kane County bond court. The judge set Ruiz’s bail at $25,000 and released him based upon his promise to appear in court.

A man with a violent criminal history has been sentenced to remain in prison until after his 100th birthday for the 2005 murder of Michael Moore of Aurora and the attempted murder of Moore’s friend.

In the Moore murder, Saulsberry was a passenger in a Ford mini-van with several fellow street gang members. The men were hunting for any street gang rivals to kill.

In the intersection of Smith Street and East Galena Boulevard they spotted a white 1995 Oldsmobile 98 that contained 27-year-old Michael Moore and his friend. The van pulled along the left side of the Oldsmobile, and a co-defendant held open the sliding side door of the van while Saulsberry fired a 9mm semiautomatic handgun at the Oldsmobile.

Aurora police are continuing to investigate an early morning crash on Dec. 15  in which a vehicle being driven by a 25-year-old Aurora man was stuck by a train on Prairie Street west of Orchard Road.

According to the Aurora Police Department Facebook page, Mark A. Lacek of the 1800 block of Kenilworth Place was able to jump out of his 2012 Volkswagen Jetta before the collision and was not injured.

The collision took place around 1:20 a.m. Saturday, when Lasek said he pulled off to the side of the road on Prairie Street so he could text someone.

When Lasek tried to get back onto the roadway, he apparently turned onto the railroad tracks by mistake and the Jetta got stuck on the tracks, police said.

The engineer of an eastbound Burlington Northern freight train traveling at about 30 mph saw the stranded car as he approached the scene, according to police reports He sounded the horn and hit the emergency brake but could not stop in time before colliding with the rear of the vehicle.

The engineer also was not injured.

Lacek was charged with operating an uninsured motor vehicle and unlawfully entering a highway rail grade.