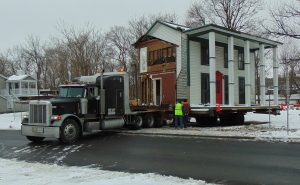 How do you move a house? Very carefully. After a couple of false starts, work crews in Geneva last week successfully moved the 1839 Miller-Gully house from its original home on East St. St. to a new location on East Side Drive, setting the home (far right) on a new foundation. ((Photos by Jack McCarthy / Chronicle Media)

Aurora police continue to investigate what they are describing as the suspicious death of a Yorkville woman found in the basement of an Aurora home.

According to a post on the Aurora Police Department Facebook page, the woman has been identified as 30-year-old Kristina Davies of the 7700 block of Madeline Dr., Yorkville.

She was found deceased on Jan. 15 in the basement of a home in the 1300 block of Monomoy Street on Aurora’s West Side by two maintenance men who were cleaning the basement.

She apparently has never lived in the complex, police said.

“We will have to await results from the toxicology tests to better determine the cause of death,” APD spokesman Dan Ferrelli said.

The Police Department is asking anyone with information on Davies to call the Investigations Unit at 630-256-5500.

Kane County saw its third house fire in five days on Jan. 16, when a blaze erupted in a home on Elgin’s East Side.

Preliminary fire loss estimates exceed $200,000, and the fire remains under investigation by the Elgin Fire Department.

The first Fire Department unit arrived on scene about three minutes after dispatch, officials said. Upon arrival, companies found smoke coming from the rear door of the occupancy and were informed by the occupants that the basement was on fire.

The initial crews worked to advance into the basement but were unable to gain access due to a combination of heat and excessive storage, the news release said. Further contributing to the difficulties controlling the fire was the building construction.

The older home was built prior to the use of modern fire stopping, and fire was able to travel through the walls unimpeded, to the upper floors and attic of the home, Elgin Fire Department spokesperson Richard J. Cummings said.

The Fire Department upgraded the fire to a second alarm, deploying a total of 38 Elgin firefighters.

Eleven other area fire departments provided assistance either on scene or by covering Elgin stations.

This is the third structure fire in Kane County since Jan. 12, when a split-level duplex caught fire in the 500 block of Thorndale Drive in Elgin. That home was deemed uninhabitable after the blaze.

On Jan. 13, St. Charles firefighters battled a garage fire of a home at 1809 Cambridge Drive. Fire loss in that fire is estimated at $25,000 to the structure, a vehicle that was parked in the garage and its contents.

Kane County prosecutors have dismissed criminal charges against an Aurora woman accused in 2014 of theft and related alleged offenses.

The charges followed an investigation that began in 2012 into allegations of financial discrepancies in a senior assistance program in Aurora.

However, further investigation revealed that Ms. Campos was not as culpable as the original evidence suggested, which led to the decision to dismiss the case against her.

“First and foremost, we are obligated to seek justice. As part of that obligation, we work with police to keep investigations active after the filing of charges to assure that we have all relevant facts,” McMahon said.

“As we continued to review this case and apply the law to all of the facts, it became clear that we cannot in good faith proceed with this prosecution. The just decision in this case is to dismiss the charges against Ms. Campos.”

Four Aurora Police Officers receive Medals of Valor, the highest recognition bestowed by the Aurora Police Department, during a public ceremony on Jan. 16.

Two of the officers, Ryszard (“Rick”) Drozdowski and Bradley Vonhoff, were honored for their actions May 4, 2018, when a 95-year-old woman drove her vehicle into a far East Side retention pond; while the other two officers, Special Operations Investigators Colin Griffin and Matthew Huber, received honors for their response when they came under fire by a known gang member March 22, 2018.

The medals give honors to officers who demonstrate outstanding acts of bravery and heroism performed in the line of duty which puts their lives at extreme risk.

The Police Department rolled out its new Police uniform patch which has not been changed in about 50 years. It replaces one that had a generic design that had been adopted by police agencies and security organizations around the Nation.

The ceremony introduced the Department’s newest members and honored the most recent retirees.

The Aurora Police Department is hoping to get some help identifying an individual who allegedly used credit cards that were stolen during the Christmas holiday season from a vehicle in the Hometown Subdivision.

Police said the credit cards were used to make purchases at the 7-Eleven in the 1600 block of Montgomery Road and the Walgreens in the 2300 block of Ogden Avenue.

The vehicle was parked in a driveway and was one of several burglarized in the same time frame.