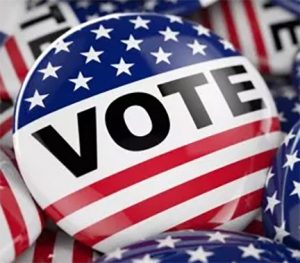 Early voting in Kane County is now under way for the April 2 municipal elections.

Early voting is now under way for the April 2 local election.

Voters in the upcoming election will have a number of important decisions to make — for mayoral and village president positions, city council and village board members, school board, park board, library board and more.

Aurora Mayor Richard C. Irvin’s 2019 State of the City Address – “The Light is on: Aurora is Open for Business” — will bring the community together for a review of the past year and a preview of the year ahead, including several announcements.

“This has been a pivotal year in Aurora,” said Mayor Richard C. Irvin. “During last year’s address, I announced many initiatives that are now on the completed checklist. What’s on the horizon is even more exciting.”

Irvin will focus on his key priorities of economic development, public safety and education while highlighting advances in technology, government efficiency and transparency and community engagement.

“We are looking forward to another successful event which allows our three chambers to collaborate with each other and the mayor,” Chamber leaders said in a joint statement. “Hundreds of members of the business community have already responded to our announcement and are excited to be in attendance.”

While the event is free and open to the public, seats are limited.

Geneva residents can apply to serve on the City’s new Speed Control Policy Task Force, which will be charged with making recommendations on how speed limits are established in the community.

Mayor Kevin Burns announced the creation of the task force during the Feb. 19 City Council meeting. The panel will be comprised of 11 residents – two from each of the City’s five wards plus one at-large member – that will work with City staff liaisons from the Geneva Police Department, Public Works Department and City Administration.

Geneva implemented a speed control policy in 1996 following a study by a previous task force. During a special policy discussion earlier this month, the City Council recommended reviving a similar policy review process to make sure the methods used to set speed limits are not outdated.

The formation of the task force is in response to resident concerns about speeding and pedestrian safety, the latter which has been identified as a goal in the City’s newly adopted strategic plan.

Residents interested in serving on the task force should fill out an application, which is available on the City’s website. The application deadline is Monday, March 4. Submissions can be dropped off or mailed to Geneva City Hall, Attention: Speed Control Policy Task Force, 22 S. First St., Geneva, IL 60134.

Members of the St. Charles Police and Fire departments will be “freezin’ for a reason” as they go jump in a lake for the 2019 Polar Plunge on March 3 at 1 p.m. at Loon Lake in Yorkville..

The St. Charles Police and Fire team has a fundraising goal of $3,000. Fundraising helps offset the cost of participation, uniforms, and health screenings for Special Olympics athletes.

The team will be led by Police Officer Jennifer Larsen, who will be participating in her fifth polar plunge. Larsen will be joined by St. Charles firefighter/paramedic Stephen Siwy, St. Charles Park Safety Supervisor Tim Timberlake, along with their families and friends.

“Last year, we had an amazing outpouring of support from the community in support of Illinois Special Olympics athletes,” said Larsen. “We’re so excited to participate in the Law Enforcement Torch Run again and can’t wait to build upon last year’s successes.”

For more information about the Polar Plunge and the St. Charles Police and Fire Team, visit the Special Olympics Illinois website.

The Neighborhood Public Art Grant program is available to all Elgin registered 501(c)3 neighborhood organizations. The program is intended to give the residents of the community a voice in determining the art in their neighborhood and to help further showcase their identity. Two awards of up to $3,250 are available for 3D projects. Applications are due by 4 p.m. on May 6, 2019 at City Hall.

The Utility Box Wrapping Program is available for artists to have their artwork printed onto vinyl and applied to traffic signal and other utility boxes located in downtown Elgin. Utility box wrapping is a program in place in several cities across the world. The ECAC intends to wrap two boxes this year; staff has identified nine boxes that are possible locations in downtown Elgin.

The ECAC will vote on the first box to wrap at the April 8 meeting with the second box being determined at the August 12 meeting. Once wrapped, these utility boxes will be included on Elgin’s online public art map. Applications are open to all artists at all levels, worldwide, but preference will be given to Elgin-based artists. Selected artists shall receive an honorarium of up to $1,500. Artwork will be approved by the ECAC once the application has been submitted. The ECAC will review applications to ensure aesthetic quality, design, integrity, and to determine that the work is appropriate to the setting, architecture, and social context. Artwork shall consist of exceptional quality and have an enduring value to the City. After approval, the application will remain on file for two years.

To learn more about both of these programs and all things cultural arts, visit cityofelgin.org/culturalarts. For questions or concerns contact Cultural Arts Manager Amanda Harris at 847-931-6019 or harris_a@cityofelgin.org.

The QuickPath Degree Program gives motivated students the opportunity to earn an Associate in Arts Degree in a year by taking a series of hybrid classes that combine face-to-face meetings on the Sugar Grove Campus with online classes.

The program is designed for students planning to transfer to a four-year college to complete a Bachelor of Arts Degree. This program is appropriate for students interested in communications, English, history and psychology. Its broad program of study is also great for those students who are undecided on a major or want a liberal arts general education.

Students accepted into the program complete it as a cohort and the cohort receives additional assistance on the transfer process and any other issues that may arise during the year.

Those interested in applying for the QuickPath Degree Program must have a high level of commitment and motivation to complete the accelerated program. They must also demonstrate college readiness with a minimum 2.75 high school GPA and placement in college-level courses.

Visit www.waubonsee.edu/quickpath for more information on the program and the application process.