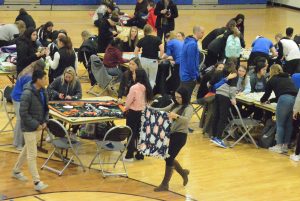 A Feb. 27 townhouse fire on Aurora’s West Side claimed the life of a 4-year-old girl and inured a 25-year-old woman and five-month-old girl.

Aurora Fire officials said the woman and 5-month-old suffered smoke inhalation in a first that occurred at around 1:57 p.m. at the four-unit townhouse located in the 1800 block of Carnation Court. They were  transported to a local hospital, then airlifted to Loyola Hospital.

When firefighters arrived, the building already was engulfed in smoke and flames, according to a Fire Department statement.

A rescue was attempted after firefighters received a report of a trapped occupant. Firefighters encountered heavy smoke and fire and were forced to fight the fire from the exterior before entering the burning home. Multiple hose lines were used to extinguish the fire.

The fire was upgraded to a third alarm, bringing additional help to control the fire and keep it from spreading to additional units.

A total of 43 firefighters arrived on the scene with additional help from North Aurora.

One firefighter was injured during the incident. The firefighter was treated on the scene, transported to an area hospital, and then released. The estimated fire loss is $500,000 leaving the building uninhabitable.

The fire started in a first floor living room, officials said. The cause remains under investigation

A man wanted for murder in the state of California apparently shot himself and sustained life-threatening injuries at a residence in rural St. Charles Township on Feb 27.

According to the Kane County Sheriff’s Office, sheriff’s deputies along with St Charles Police responded at about 3 p.m. to a residence in the 3N600 block of Bittersweet Road in unincorporated St Charles Township for a reported sighting of Mark Sypien, who is wanted in California for murder.

As police arrived in the area, they heard a single gunshot. Officers located a male subject on the front lawn suffering from what appears to be a self-inflicted gunshot wound. The subject was identified as Sypien.

Sypien was transported to Delnor Hospital in Geneva with a potential life-threatening injuries. At around 7:38 p.m. Wednesday, the Sheriff’s Office announced that Sypien was pronounced deceased shortly after his arrival at Delnor Hospital.

The Mercury News article said Sypien had dated Moore’s daughter in the late 2000s, was abusive to his girlfriend and her daughters and continued to harass the family for years.

Authorities were concerned that Sypien might flee to his parents’ home on Bittersweet Road in St. Charles Township, so Kane County Sheriff Ron Hain notified residents of the area to be on the lookout, according to one report.

A neighbor saw Sypien and called 9-1-1. Just as police and sheriff’s deputies were arriving on the scene, Sypien used a handgun to shoot himself in the head, the Sheriff’s Office said.

According to a Sheriff’s Office Facebook post and media reports, two inmates refused to lock down following recreation time. Officer made repeated commands for the inmates to return to their cells, but they would not do so, sources said.

When officers attempted to escort the inmates, two inmates attacked two corrections officers. They were subdued, handcuffed and returned to their cells.

Three officers were treated following the incident, two of whom were taken to Delnor Hospital, according to a CBS2 report.

The case is under investigation and no charges have been filed.

The Elgin Police Department says that no criminal charges will be filed against the officer who fatally shot Decynthia Clements almost a year ago, after she allegedly brandished a knife and officers attempted to pull her from a burning vehicle on I-90.

Elgin Police Chief Ana Lalley said in a Facebook video that the Cook County State’s Attorney’s Office will not file criminal charges against Jensen or any other officers. Lalley said that determination was made following the State’s Attorney’s review of an investigation by the Illinois State Police Public Integrity Task Force.

Despite those findings, the city of Elgin is moving forward with an internal investigation that will be conducted by an independent firm to see if Jensen or other officers violated any police procedures.

The independent investigation will also review Elgin Police Department policies and procedures related to the use of force, Lalley said.

Lalley said Elgin police have not yet received the investigative report completed by the Illinois State Police but would make that information available on the city’s website as soon as possible, most likely in the next two weeks.

Jensen will remain on paid administrative leave until conclusion of the independent professional standards review.

The fire, which began around 4:44 p.m. Sunday, Feb. 24, stemmed from a cable/connector failure in the primary compartment of an electric transformer on North Third Street, the city of Geneva said in a news release.

The failure triggered a blaze that significantly damaged the transformer and caused a power outage for downtown Geneva businesses and residences between Route 31 on the east, State Street (IL Route 38) on the south, Third Street on the west and Hamilton Street on the north.

While all streets and traffic signals in the area remained open and operational, Sunday motorists were encouraged to slow down in the work zone.

When the electric transformer fire was reported to 9-1-1 Sunday, afternoon, the Geneva Fire Department responded to the scene to extinguish the blaze, which caused significant damage to the transformer.

An official cause of the fire is under investigation.

The difficult weather conditions, which included wind gusts of 50 mph or more and fast-falling temperatures, were a challenge for public works crews.

An unnamed Elburn police officer will be disciplined and receive additional training after allowing a teen being held on car-burglary and other charges in to escape custody.

According to an Elburn Police Department news release, a 17-year-old who had been awaiting vehicle-burglary charges escaped by crawling out a window in late December, but was quickly recaptured and now faces multiple felony charges.

Police discovered during an interview on Dec. 20 that the 17-year-old was in possession of stolen credit cards, and the juvenile was being held in non-secure custody while officers worked with the Kane County States Attorney’s Office to get felony charges approved.

The juvenile escaped from the Elburn Police Department around 6 p.m. by crawling out of a window while the officer was out of the room.

The juvenile was taken back into custody and faces felony charges of Burglary to Motor Vehicle, Possession of Stolen Property, and Escape.

The circumstances leading up to the escape were the subject of an internal review and investigation, Elburn police said in the news release. The investigation has been completed and the officer responsible was found to have violated departmental policy which led to the escape.

The discipline for the violation includes the extension of the officer’s probationary employment period, additional training on both the respective departmental policy as well as Illinois juvenile law, and a one-day unpaid suspension day.

After 25 years of offering services to persons living with HIV/AIDS in Aurora, Open Door Health Center of Illinois will relocate from its current office space on Lincoln Avenue to new space on the Amita/Mercy campus located at 1315 N. Highland Ave., Suite 204.

The move is prompted by a need to accommodate the increasing number of clients requesting service, said Perry Maier, executive director of Open Door Health Center.

“We are at the point where our current space is limiting our capacity to effectively and efficiently deal with the medical, behavioral health, case management, housing and outreach needs of our clients,” he said. “Larger space will enable the staff of Open Door to continue our rich history of quality services to meet the demand within the Aurora Community.”

Open Door is a regional, patient-centered health care organization that provides services including education, prevention, diagnosis and treatment services to those who have or are at risk for Sexually Transmitted Infections, including HIV/AIDS, in addition to the greater LGBTQ community.

The relocation is expected to occur in mid-Spring of 2019.

For further information or to learn about the services offered through Open Door Health Center of Illinois, visit the website odhcil.org or call 847-695-1093.

Two Chicago men have been sentenced to prison for their roles in armed robberies in Hampshire and East Dundee.

Damarcus D. Gilmore, 20, was sentenced to 21 years’ imprisonment following a guilty plea to two counts of Armed Robbery, a Class X felony, and Battery, a Class A misdemeanor.

Kane County Assistant State’s Attorney Christine Bayer stated in court that shortly before midnight May 15, 2017, Gilmore and Ormond entered a Speedway gas station in Hampshire. Gilmore was armed with a loaded 9mm handgun. Ormond was the lookout.

Gilmore pointed the gun at the clerk and demanded cash. The men fled with more than $500 in cash, lottery scratch-off tickets and cigarettes.

Bayer said the men went to Boone County, then returned to Kane County and stopped at a Thornton’s gas station in East Dundee.

There, Gilmore pointed the gun at the clerk and demanded cash. The men fled with more than $700 in cash, lottery scratch-off tickets, cigarettes and the clerk’s cell phone.

When they were stopped a short time later for a speeding violation on Interstate 90, Illinois State Police troopers discovered the stolen property and placed them under arrest.