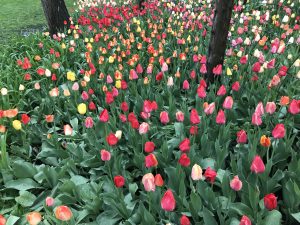 Multi-colored tulips finally make an appearance after a cool spring start in front of this Geneva home. (Photo by Jack McCarthy / Chronicle Media)

The School District U-46 Board of Education last week approved a new four-year contract for more than 2,400 members of the Elgin Teachers Association.

Officials say the contract addresses both compensation and teaching and learning conditions for teachers in the state’s second-largest school district and follows seven months of negotiations.

The contract calls for a base salary increase of 1 percent the second and third years, then dropping to .50 percent for the final year.

The ETA membership voted 1,776 to 336 to ratify the agreement last week before bringing it to the Board of Education.

“This is a collaborative agreement to compensate teachers as professionals and work in safe and robust teaching and learning conditions,” said Dr. Suzanne Johnson, deputy superintendent of instruction. “The agreement recognizes traditional post-bachelor education as well as professional development and additional credentials as we prepare students for college and careers.”

Along Western Avenue, the Geneva Police Department set up barricades and helped direct traffic around the closure, while the city’s Public Works Department responded to the problem.

The the 12-inch water main break started at 6:10 a.m. and flooded the area around Western Avenue, Cheever Street and Dunstan Road. The water levels were reported to be 2 feet to 3 feet deep in spots.

The Geneva Park District and Geneva Community Unit School District 304 notified residents of the situation given the close proximity of the Sunset Community Center and Western Avenue School.

The Public Works Department also responded to three other substantial water main breaks this morning: near the Dodson Tower, at Woodlawn Avenue and in the 500 block of Forest View Drive near Route 31, the city said in a series of news alerts.

The city said the cause of the Western Avenue water main incident remains under investigation.

The break was severe enough to cause flow and pressure variations across Geneva’s entire water system, initially resulting in two other water main breaks on Dodson Street near Harrison Street School and Woodlawn Avenue.

The work is expected to be complete by the end of August.

According to a city of St. Charles news release, Route 64 will remain open to traffic throughout the project.

Motorists can expect delays and should allow extra time for trips through this area. Drivers are urged to pay close attention to flaggers and signs in the work zones, obey the posted speed limits and be on the alert for workers and equipment.

for abuse of infant

A Batavia man will go to prison for causing permanent injuries to his girlfriend’s infant son.

Kane County Circuit Judge John A. Barsanti on April 24 sentenced 24-year-old Anthony B. Briden to a sentence of 13 years’ imprisonment in the Illinois Department of Corrections.

Kane County Assistant State’s Attorney William Engerman stated in court that at about 2:30 a.m. March 5, 2016, the victim, an infant, had been sleeping in a bouncy chair next to the victim’s bed at the Elgin residence they shared with the infant’s mother. The victim awoke to be fed.

Briden grabbed the victim by the right ankle and swung him onto the bed, breaking the infant’s leg.

The next day, Briden and victim’s mother took the victim to the hospital, where doctors determined that the victim had suffered a severe brain injury and broken ribs.

As a result of the injuries, the victim cannot speak, see, walk or eat on his own, and requires 24-hour care. Briden admitted to police that he caused the injuries.

For the second time in team history, the Chicago Steel — Kane County’s very own hockey team — has advanced to the Clark Cup final.

The Steel reached  the championship series for the second time in the last three seasons by virtue of a 3-2 overtime win on May 4, closing out a 3-games-to-1 Eastern Conference Final over the Muskegon Lumberjacks.

The Steel was scheduled to meetWestern Conference Champion Sioux Falls Stampede in a best-of-five series beginning Friday, May 10, and Sunday, May 12, in Sioux Falls before returning to the Fox Valley Ice Arena in Geneva to host Game 3 on Friday, May 17 and, if necessary, Game 4 on Saturday, May 18.

Tickets are now on sale for the May 17 home game. The first 1,500 people each game will receive a Clark Cup Final Rally Towel.

Tickets start at just $10, and sit right on the glass in stadium seating for just $20. Plus, parking is always free.

Single game tickets may be purchased in person at the Steel Box Office, by phone at 855-51-STEEL or online at ChicagoSteelHockeyTeam.com.

The show opens at 10 a.m. on Saturday, May 25, along Riverside Avenue with more than 90 artists, whose work was juried for acceptance into the show. This year’s show is sponsored by STC Capital Bank and runs from 10 a.m. to 6 p.m. Saturday and from 10 a.m. to 5 p.m. Sunday, May 26, rain or shine.

The award-winning show features painting, sculpture, photography, glass, wood, jewelry and other media, all of which draws thousands of visitors to downtown St. Charles to both view and purchase the work of artists from across the U.S.

There will also be live musical entertainment throughout the show, which will be located on the corner of 2nd and Walnut Street.

The Art Activities Tent will be in Fox Island Square, which is near the corner of First Street and Illinois, and will feature not only activities from All Things Art Studio, but also the businesses located in the square.

This year will feature the return of the Pavement the Pavement – A Chalk Fest! on the west side of the river along First Street and in First Street Plaza with chalk artists painting the pavement with various artistic talents.

The Illinois Department of Transportation announced that the Illinois 47 and Plato Road intersection in Kane County will be reconstructed into a roundabout beginning, weather permitting, May 20.

In order to complete the project, traffic on Illinois 47 will be shifted to temporary pavement. Plato Road will be closed at Illinois 47 beginning in early June, with traffic detoured to Kendall Road, McDonald Road, Illinois 47 and Burlington Road.

The project is expected to be complete by October.

Motorists can expect delays and should allow extra time for trips through this area. Drivers are urged to pay close attention to flaggers and signs in the work zones, obey the posted speed limits and be on the alert for workers and equipment.

A total of 27 crashes were reported at the intersection of Illinois Route 47 at Plato Road between 2006 and 2010. Five of the crashes resulted in injuries, six occurred on wet pavement, and 20 were during daylight hours.

In 2010, there was one fatal crash at the intersection. Two vehicles traveling east and south collided after both drivers failed to stop at the all-way stop.

An Aurora woman was arrested last week after reportedly holding a knife to her husband’s throat and setting fire to his clothes.

At 1 a.m. Sunday, May 5, Aurora police officers were sent to investigate a report of a person with a weapon inside a residence in the 00-50 block of North Kendall Street.

Responding officers were advised that Rosanda Taylor was inside her home there, armed with a knife, and was “destroying the residence.”

The caller, Taylor’s 37-year-old husband, then informed police that Taylor had left the residence in a blue Chevrolet Malibu.

Upon arrival, officers saw heavy smoke coming from the residence and located a fire inside a bedroom. The husband and their small children, ages five months and 12 years managed to escape the home prior to police arrival.

Aurora Fire Department was dispatched and managed the fire, which was reportedly set by Taylor during an argument with her husband over suspected infidelities.

According to investigators, Taylor brandished a knife and at one point held it against her husband’s throat before going into a bedroom and setting his clothes on fire.

The husband received a small cut to his left hand, but no other injuries were reported to him or the children. He was treated and released at the scene by AFD medics.

Taylor was later located at her overnight place of employment, in the 2200 block of West Galena Boulevard in Aurora. She was taken into custody without further incident.