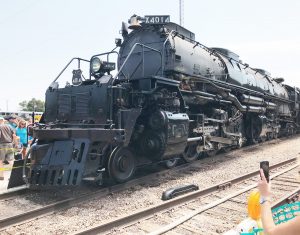 Big Boy No. 4014 rumbled into West Chicago last weekend, giving hundreds of rail fans a chance to view the world’s largest steam engine. The 1.2-million pound engine was decommissioned in 1959 but brought out of retirement and restored. Running through the region as part of a “Great Race Across the Midwest,” Big Boy’s next stop is Des Moines, Iowa. (Photo by Jack McCarthy / Chronicle Media)

Aurora police are investigating after a 61-year-old woman riding a bicycle was struck and killed by a vehicle early on July 23.

According to Aurora Police, just after 1:20 a.m.on July 23, a Kane County sheriff’s deputy noticed a bicycle in a grassy area on the side of the South Edgelawn Road, just south of Prairie Street.

Police said the deputy located a woman — later identified as 61-year-old Elizabeth Kakoczki of Aurora — in the line of trees nearby and requested Aurora police officers and the Aurora Fire Department personnel come to the scene.

The deputy and Aurora police officers started performing CPR on Kakoczki until paramedics arrived. She was transported to an area hospital by the Aurora Fire Department, where she was pronounced dead.

Aurora police’s accident investigation team responded to the scene to collect evidence and begin investigating the circumstances. Officers determined the bicyclist was struck by another vehicle that fled from the scene.

Anyone with information about the accident is asked to call the Aurora Police Department’s Traffic Unit at 630-256-5330 or call Crime Stoppers at 630-892-1000 to anonymously report a crime.

Rescue crews find boat that went over Fox River dam, but no victim

The St. Charles Fire Department attempted a dramatic overnight river rescue early on July 23 after a boat went over the Fox River dam and became trapped in the deadly boil — but no victim was found.

According to the St. Charles Fire Department, rescue crews were dispatched at around 1:59 a.m. to a report of a boat over the dam and a possible victim in the water.

Fire units were on the scene by 2 a.m. and found a boat over the dam, and trapped in the boil, but “there was no indication of a victim,” St. Charles Fire Chief Joe Schelstreet said in the news release.

Firefighters used a Fire Department boat to access the boat in the dam and to search it for possible victims. None were found in the boat or in the water.

A rope was attached to the boat, and it was removed from the boil so that a further search could be completed. That search was again negative, Schelstreet said.

Using registration information on the boat, the St. Charles Police Department has been attempting to locate its owner. The boat was removed to the canoe launch at Mount St. Mary Park, where arrangements are being made to have it removed from the river.

Later in the morning., the incident was being treated as a boat that came loose from its moorings.

Further information will be available once the owner is located, Schelstreet said.

In an effort to streamline event permitting processes, increase transparency and cut costs, the City of Aurora has launched Eproval – a new online special events application and approval platform.

Eproval is a leading online application and approval solution designed for local governments – making it easier for customers to submit applications, and more cost-efficient for government and partner agencies to review and approve.

“Each year, we receive nearly 100 applications for special events,” said Special Events Manager Gina Moga. “The new Eproval platform will make the process much more streamlined and user-friendly, resulting in a faster approval time for permits.”

For those seeking to host events in Aurora, the system will reduce paper submissions, processing times and the need for multiple face-to-face meetings. It is accessible from any computer or any device, anytime and anywhere.

For those managing the approval process, Eproval enables real-time collaboration between all departments, using proven workflow processes and leveraging a common dashboard which will lead to process improvement and approval transparency.

Access the new application at www.aurora-il.org/1235/Special-Events under the Permits & Applications tab.

Pacifica Square, the former Yorkshire Plaza at the intersection of New York Street and Illinois Route 59, is presently under construction of its first phase.

The development will be the largest Asian-themed shopping and lifestyle center in the country. Lao Sze Chuan will be an anchor restaurant in Pacifica Square.

The first Lao Sze Chuan restaurant opened in 1998 in Chicago’s Chinatown and has since become one of the most beloved Chinese restaurants nationwide. The brainchild of Chef Tony Hu, Lao Sze Chuan prides itself on providing traditional Sichuan cuisine with high-quality ingredients.

In addition to its tenth location in Aurora, Lao Sze Chuan has three locations in Chicago and others in Downers Grove, Skokie, Evanston and Champaign; Minneapolis, Minnesota and Milford Connecticut. New locations will open soon in Highland Park, Schaumburg and another in Chicago.

The training will focus on a potential response to an active shooting incident with an emphasis on a unified approach. The exercise will feature emergency vehicles from multiple departments, and sirens and fire alarms may be activated as part of the training.

The church and surrounding area will be closed to the public during this time to ensure the safety of emergency responders and neighbors.

Signs will be posted around the church property to alert residents of the exercise and training boundaries. The public should avoid the church grounds until the training exercise is complete and all emergency vehicles have left the area.

People interested in having a workplace violence/active shooter preparedness presentation at their school or business can call Geneva Police Administrative Sgt. Eli Rivera at 630-232-4736.

A fugitive on Massachusetts’ Most Wanted List was arrested Friday in Aurora by Aurora police officers and the U.S. Marshals Great Lakes Regional Fugitive Task Force.

According to an Aurora Police Department news release, Zion Vazquez, 32, was arrested at an abandoned home in the 1300 block of Plain Avenue after Massachusetts State Police contacted the U.S. Marshals Great Lakes Regional Fugitive Task Force to investigate a tip they had received about where he might be located.

Vazquez is a suspect in multiple sexual assaults against a child, who was under age 10, over an extended period. Police obtained a warrant for his arrest in 2013, but he fled after learning of the investigation.

Vazquez was added to Massachusetts’ Most Wanted List on June 20.

Task Force officers located Vazquez at the home and learned he had been using the alias Jay Medina.

Police said it appears Vasquez has been in the Aurora area for a little while. He was taken into custody without incident.

Officers transported Vazquez to the Kane County Adult Justice Center, where he will await rendition to Worcester County, Massachusetts.

“’Chaos to Clarity’ is a journal to help readers achieve a greater sense of confidence, courage and meaning in their lives. The Journal is designed to help readers focus their thoughts in a new, empowering way.”

Independently published, the 120-page paperback is available from Amazon.com for $15.

State Rep. Jeff Keicher (R-Sycamore) has been chosen as one of forty-one emerging leaders from throughout Illinois to the 2019 Class of Edgar Fellows.

Known for its prestigious reputation for stimulating cooperation across regional, political and ethnic lines, the Edgar Fellows program is a highly selective leadership seminar that accepts only the most qualified emerging leaders in Illinois each year.

Spearheaded by former Illinois Governor Jim Edgar, the Edgar Fellows program is designed to influence attitudes and foster mutual understanding. It fosters the goal of facilitating bipartisan and cross-regional cooperation as class participants assume more influential public leadership roles. Fellows include elected and appointed officials from all levels of government, as well as Illinoisans who have distinguished themselves in the business world and civic affairs.

This year’s class of Edgar Fellows will gather Aug. 4-8 in Champaign for an extensive and focused executive training program hosted by Edgar and the University of Illinois Institute of Government and Public Affairs (IGPA). The Fellows will engage with each other and with experienced practitioners and scholars in major policy areas such as health care, education and economic development. The Edgar Fellows program is currently in its eighth year.