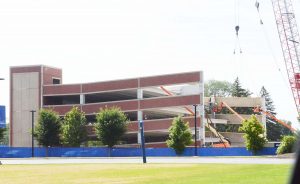 School is expected to start on schedule on Aug. 14 despite a July 28 fire that caused up to $1 million in damages to a music room, gymnasium and several classrooms as well as smoke damage throughout the building. (Photo by Jack McCarthy / Chronicle Media)

An Algonquin motorcyclist has been charged with reckless homicide for his role in a high-speed June street race that ended with the death of 49-year-old Piotr Klimczak of Palatine.

According to a report from the Elgin Police Department, Klimczak was street racing at 5:52 a.m. on Tuesday, on June 11 on Wing Street in Elgin, when his motorcycle crossed the center line and collided with a northbound 2005 Honda SUV.

Klimczak was critically injured and transported to Presence St. Joseph Hospital, where he was pronounced deceased.

Follow-up investigation was conducted with assistance from West Dundee police, during which officers determined that Klimczak and Matthew Kasper, 26,  had been street racing at speeds calculated between 88 and 114 mph, leading up to the fatal crash.
Police said Kasper had left the scene when emergency responders arrived at the crash site.

Kasper was taken into custody on July 23 and appeared in Kane County bond court. His next court appearance is set for Aug. 15.

Aurora Police are assisting in the investigation of an industrial accident that killed a 19-year-old man on Aug. 1.

Just after 9:30 a.m., the Aurora Police officers and the Aurora Fire Department, responded to a 911 call for an employee trapped under large wood panels at a rail facility in the 600 block of McClure Road. When officers arrived, they found a man pinned underneath a large woodpile.

Firefighters and paramedics from the Aurora Fire Department quickly used rescue equipment to lift the wood panels off the man. Unfortunately, paramedics pronounced the man dead on the scene.

Aurora Police detectives and evidence technicians responded to the scene to identify and collect forensic evidence from the incident and begin a death investigation. Because the incident involved a railcar on rails owned by BNSF, officers from the BNSF Police Department also responded. Additionally, investigators from the Occupational Safety and Health Administration (OSHA) also arrived to conduct their own investigation.

According to a preliminary investigation, the man was removing the large wood panels from a railcar when they fell on him. The panels are used in construction to support cranes or large equipment on uneven ground.

Aurora Police have released a “video of interest” in connection with a fatal hit-and-run accident that killed bicyclist Elizabeth Kakoczki on July 23 on South Edgelawn Drive.

According to Aurora Police, the video shows two vehicles that might have been involved. Visit https://youtu.be/fjw5nYZ0lFE to view the video.

According to police, at just after 1:20 a.m. on July 23, a Kane County sheriff’s deputy noticed a bicycle in a grassy area on the side of the South Edgelawn Road, just south of Prairie St..

Police said the deputy located a woman — later identified as 61-year-old Elizabeth Kakoczki of Aurora — in the line of trees nearby and requested Aurora police officers and the Aurora Fire Department personnel come to the scene.

Kakoczki was transported to an area hospital by the Aurora Fire Department, where she was pronounced deceased.

Man charged with firing more than dozen rounds towards tollway

A Gilberts man faces criminal charges for firing more than a dozen shots from an AK-47 rifle in the direction of the Jane Addams Tollway after he heard laughter outside of his home early in the morning.

Kane County prosecutors allege in charging documents that on July 28, Mendoza fired 14 shots from an AK-47 rifle in the air toward Interstate 90 and Illinois Route 72 at a time when his neighbors had six to eight visitors in the yard.

According to Gilberts police, the incident happened around 2 a.m. after Mendoza became upset when he heard giggling outside of his window. The intersection of Interstate 90 and Route 72 is in close proximity to Mendoza’s home.

The Kane County Division of Transportation said additional turn lanes and through lanes will increase safety and improve traffic operations of the intersection.

The anticipated completion date for the project is Sept. 30, 2020, weather permitting.

“Since this improvement is at an existing busy intersection, longer than normal traffic delays are expected during construction,” KDOT said in a news release.

Fabyan Parkway and Kirk Road will remain open during construction, but may include temporary daily lane closures and flaggers primarily from 8 a.m. to 4 p.m.. Motorists should expect delays while traveling through the work areas and should add additional time to commutes.

Drivers are asked to reduce their speed, watch for construction workers and vehicles entering or leaving the site, obey flaggers and comply with traffic control devices within the work zone.

Brzezinski said she hopes to train 25 new tutors to join 154 current tutors. About 150 women are on a waiting list for tutors she said.

Brzezinski said tutors receive information about prospective students, including years in the U.S., previous education and how often a student speaks English at home and on a job.

She added that center support staff are available to assist, answer questions and resolve issues.

Teaching aids include picture dictionaries and other materials for vocabulary, writing, conversation, grammar and group activities. A training manual is $20.