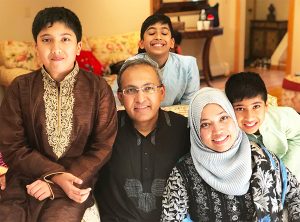 She was working in her office on the 38th floor of World Trade Center 1 on the morning of Sept. 11, 2001 when her life – and the world – would change forever.

From holding her desk with both hands thinking the building was going to fall after the plane struck to being in a crowded dark stairwell when she heard the plane hit the second tower to running through the streets of Manhattan covered in dust after watching both towers in flames and subsequently collapsing.

Zerin-Anwar, who moved to Aurora with her husband in 2006, will be the guest speaker at the City of Aurora’s annual Sept. 11 Memorial Ceremony at 8:30 a.m. on Wednesday, Sept. 11 at the Aurora Central Fire Station, 75 N. Broadway.

“Sept. 11 will always be a time of mix emotions for me,” said Zerin-Anwar, a software engineer and mother of three. “It was a day filled with shock and loss, but also with sacrifice, kindness and unity. The city and country came together in a way that will stay with me forever.”

The ceremony is open to the public.

The event that celebrates the arts, encouraging bold artistic experimentation and innovation by providing an accessible, affordable experience for both artists and audiences alike.

Visitors must purchase a 2019 Elgin Fringe Festival button in order to gain access. Events are free, $5 or $10. Shows with a fee must have a ticket purchased and picked up ahead of time — not at the door. Purchases made online will be available for pickup during Fringe.

All ticket and art sales go to the artists. So, the button helps to support the festival as a whole, including staff, marketing, supplies, and more.

Tickets and more information are available at elginfringefestival.com.

Each year, the USCM selects a recipient from among its 1,400 member-mayors who has publicly and consistently supported small businesses and serves as a model for other communities.

“Mayor Irvin has demonstrated his commitment and support of small business in Aurora by creating a business-friendly environment for businesses to grow and prosper,” said Jeffrey Bean, USCM spokesman. “His efforts have helped many new entrepreneurs fulfill their dreams and start a business.”

Representatives from the United States Conference of Mayors will travel from Washington D.C. to Aurora next week to present Mayor Irvin with the award and to salute Aurora’s business community for its consistent growth and development.

An Elgin man has been sent to prison for engaging in sexual offenses and sexual behavior with children at an Elgin public swimming pool last summer.

On. Aug. 30, Jose T. Barboza-Lopez, 28, agreed to a sentence of five years’ imprisonment in the Illinois Department of Corrections in exchange for a guilty plea to the offense of aggravated criminal sexual abuse, a Class 2 felony.

Kane County prosecutors stated in court that on July 2, 2018, at Wing Park Pool in Elgin, Barboza-Lopez exposed himself to multiple victims and touched another victim. The victims were all younger than 18 years old.

Barboza-Lopez was prohibited by law from being in the pool park with persons younger than 18 because of a 2016 conviction in Cook County that banned him from locations where minors are likely to be present, such as public parks. He also was on probation for a 2016 burglary offense in Kane County.

In addition to the prison sentence, Barboza-Lopez must continue to register as a sexual offender in accordance with the Illinois Sexual Offender Registration Act.

The retirement community is notifying residents, the residents’ identified contact, and staff.

“Public health officials are testing for Legionella bacteria and continue to investigate to identify potential sources and additional individuals who may have been exposed during this period,” said Kane County Health Department Executive Director Barbara Jeffers. “Covenant Living is working closely with public health officials.”

Legionnaires’ disease is a serious lung infection (pneumonia) that people can get by breathing in small droplets of water containing Legionella bacteria.

Outbreaks are most commonly associated with buildings or structures that have complex water systems, like hotels, hospitals, long-term care facilities, and cruise ships.

The bacterium can become a health concern when it grows and spreads in human-made water systems, like hot tubs, cooling towers, hot water tanks, large plumbing systems, and decorative fountains.

Most healthy people do not get Legionnaires’ disease after being exposed to Legionella bacteria. People at increased risk of Legionnaire’s disease are those 50 years of age or older, or those who have certain risk factors, such as being a current or former smoker, having a chronic disease, or having a weakened immune system.

More information about Legionnaires’ disease can be found at KaneHealth.com.

The Elgin Symphony Orchestra’s (ESO) 70th Anniversary Season Classic Series will begin on Friday, Sept. 13 at the Harris Theater for Music and Dance in Chicago followed by two performances at the Hemmens Cultural Center in Elgin.

“We’ve spent many months taking a good look at programing and we learned a lot through research, post-concert surveys and focus groups,” notes Grams. “We listened to what you had to say and created concert programs with you in mind.  We think you’re going to love the results.”

This season will have opportunities for audiences from across the Chicagoland area to see the award-winning ESO. In addition to the ESO’s home venue in Elgin – The Hemmens Cultural Center, the ESO will perform two concerts at the Prairie Center for the Arts in Schaumburg, and four concerts at The Harris Theater for Music & Dance in Chicago’s Millennium Park.

A school bus aide who is employed by a company that contracts with Batavia Public School District 101 faces criminal charges for allegedly having sexual contact with a student.

The Kane County State’s Attorney’s Office has charged 79-year-old Ronald A. Spychalski with the offenses of:

According to Batavia school officials, Spychalski works as a bus monitor and is employed by Illinois Central School Bus Co., which is contracted with Batavia Public School District 101.

Spychalski appeared on Aug. 29 in Kane County bond court. Kane County Associate Judge Keith Johnson set Spychalski’s bail at $50,000, with 10 percent ($5,000) to apply for bond. If Spychalski posts bond, he is to have no contact with the victim and no unsupervised contact with anyone younger than 18.