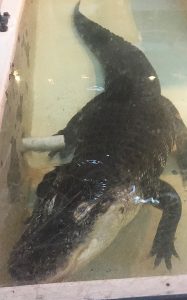 Snow and cold temperatures don’t affect operations at Aurora’s Phillips Park Zoo, which remains open to visitors throughout the year. An alligator pops its head above the water line in a pool. (Photos by Jack McCarthy / Chronicle Media )

After lengthy police chase, standoff ends with a drug charge

A nearly two-hour standoff ended on Jan. 3 with a suspect being taken into custody on a drug charge.

Grote, 40, of West Chicago, was wanted on a $1 million bond LaSalle County arrest warrant for delivery of a controlled substance. Deputies attempted to stop Grote and a pursuit ensued through southern Kane and Kendall counties, and into LaSalle County.

Police said Grote pulled to the side of the road on the 4700 block of East 23rd Road in unincorporated LaSalle County near Sandwich. Grote allegedly threatened that he had a firearm and remained in his vehicle. A standoff ensued for almost two hours as law enforcement from the Kane and LaSalle County Sheriff’s offices, and Sandwich and Leland police departments assisted at the scene while deputies negotiated with Grote for his surrender, police said.

Grote was peacefully taken into custody without incident at 6 p.m. Friday, police said. The investigation continues and Grote may face additional charges in Kane and LaSalle counties.

Aurora Police have arrested a man after he allegedly fired celebratory gunshots at midnight on New Year’s Day and endangered the lives of his neighbors when one of the bullets entered a home nearby and seriously injured a man.

Shortly after midnight on Jan. 1, the Aurora Police Department responded to an emergency call in the 1600 block of Fredericksburg Lane, for a man who had been shot in the abdomen while he was sleeping.

He told responding officers that he saw what appeared to be a bullet hole in his wall. Aurora Fire Department paramedics transported the man to an area hospital in serious condition.

Officers immediately began investigating the incident and were able to determine the apparent trajectory of the round. Officers were able to ascertain that the shots were fired from somewhere in the 2300 block of Grand Pointe Trail. When officers began searching the neighborhood, they found multiple shell casings outside of a home.

Officers began speaking with residents and learned a New Year’s Eve party was occurring at the home at the time of the incident, and multiple people reported hearing what sounded like loud pops. Officers received consent from the homeowner and searched the house and vehicles in the driveway. During the search, officers found a handgun in one of the cars.

Investigators determined the handgun belonged to 48-year-old Miguel Reyes, of the 1600 block of Fredericksburg Lane in Aurora. He admitted to detectives that he fired multiple rounds from the gun at midnight. Officers found and recovered more than 30 shell casings from outside of the home.

Christmas trees will be collected through Jan. 17

Beginning this week, Christmas trees will be picked up for free during weekly trash and recycling collection through Friday, Jan. 17.

No sticker is required for collection.

To be properly recycled, trees must be free of plastic bags, all decorations and tree stands, and placed at the curb by 6 a.m. on the normal collection day.

Due to the wire used to form them, wreaths and garlands will not be collected as recycling and must be stickered as trash.

After Friday, Jan. 17, trees left at the curb on regular collection day must have a sticker in order to be collected.

A former Geneva doctor has been sent to prison for sexually assaulting a woman he knew in 2012.

A Kane County jury on Sept. 26 found Lewis guilty of the offense of criminal sexual assault, a Class 1 felony.

Kane County Assistant State’s Attorneys Greg Sams and Julianne Gerding presented evidence during the trial that on Nov. 17, 2012, Lewis sexually assaulted the victim when she was unable to consent. The crime took place at Lewis’ home on Squire Lane in St. Charles. Lewis knew the victim.

Lewis faced a minimum sentence of four years in prison.

According to Illinois law, Lewis must serve at least 85 percent of the sentence. He receives credit for 228 days served in the Kane County jail.

Authorities in 2015 found 110 marijuana plants, more than 11,000 grams of processed marijuana, a handgun and ammunition at Lewis’ St. Charles residence. Lewis’ FOID card had been revoked.

This year marks the 30th year anniversary of the Kane County Recycles Green Guide and to mark this special edition, there are more pages than ever and new features offering tips on recycling right, Spanish language tips and ideas to use less water, energy and resources.

Basic recycling is better recycling by keeping all of non-recyclable items out of the recycling bin in order to assure capture of truly recyclable materials.

The Recycling Guidelines are on pages 8 and 9 and can be cut out and used as posters to hang above your bin.

Plastics are the most commonly misunderstood items when it comes to recycling. Plastic containers – bottles, tubs, jugs and jars – are the only plastic items that should be placed in curbside carts.

The competitive matching grant program is designed to remove hurdles in funding and know-how so businesses can embrace new technologies in their products and processes — providing Illinois manufacturers a competitive advantage.

Eligible companies may be awarded up to $25,000 in matching grant funds to be used to access third party expertise in the areas of research and development and technology adoption.

“This is happening while we are witnessing slower productivity growth in small and mid-sized manufacturers,” he said. “The timing of this program is critical for Illinois manufacturers to respond to this changing landscape.”

Questions can be submitted to IMEC at innovationvouchers@imec.org. For more information, visit www.imec.org.

Wastewater plant honored among ‘projects of the year’

The Wastewater Treatment Plant won in the Environment category for projects between $5 million and $25 million. The South Street bridge replacement took top honors in the Disaster of Emergency Repairs less than $5 million category. The APWA brand awards were judged on safety performance, environmental impact, project management, community relations, accomplishments under adverse conditions, and quality control/construction innovations brought to the projects.

This is the first time Geneva has been recognized for two projects in the same year.

Construction for a $12.5 million Geneva Wastewater Treatment Plant upgrade – one of the biggest water-related projects in the City’s history – got underway in 2018 to help bring the City in compliance with new state environmental regulations.

The South Street bridge replacement unexpectedly materialized this fall after City staff discovered the crossing was damaged by a sinkhole. The roadway was closed immediately for safety reasons. Following the securement of project funding and engineering, demolition and construction took a month to complete before the bridge was reopened in November.

Geneva’s Public Works team will receive the awards Tuesday, Jan. 14 at the APWA Fox Valley Branch’s meeting in Aurora. The Branch also will be submitting Geneva’s projects for award consideration at the APWA Chicago Chapter level in 2020.

A North Aurora man is in custody charged with vehicle burglary for the third time in a little more than three months.

The incident began on Saturday at about 9:35 a.m. when officers were dispatched to the 600 block of Oak Street for a vehicle burglary.  Officers learned that sometime after midnight, someone illegally entered an unlocked vehicle in the 600 block of Oak Street and stole two pairs of boots, approximately $10 in change, a utility knife, and a pack of cigarettes.  Also stolen with the boots was the sales receipt from a store in Aurora, where the boots were recently purchased.

At about 3:18 p.m. 20-year-old Misael Bautista, of the 500 block of Cherrywood Drive, North Aurora, entered a store in Aurora and attempted to return the boots with the receipt for cash.  The burglary victim, who was the person who recently purchased the boots, works at the store and recognized them as well as her debit card number on the receipt. Employees called police and Bautista was taken into custody without incident.

The Kane County State’s Attorney’s Office reviewed the facts of the case and authorized one count of Burglary, a class 3 felony, and one count of Theft, a class A misdemeanor. His bond was set at $19,400, which he needs to post in order to be released.  He is currently in custody at the Kane County Adult Justice Center.

Bautista was previously arrested by the North Aurora Police Department for a vehicle burglary on Sept. 18, 2019 in the 500 block of East Victoria Circle and again on Dec. 1 when he was charged with burglary to three vehicles in the 500 and 600 blocks of Cherrywood Drive. as well as the 600 block of Birchwood Drive.

On Thursday, Jan. 2, at approximately 7:39 p.m. Naperville Police Department officers responded to the 1600 block of North Route 59 for the report of an armed robbery at a local convenience store that just occurred.

It was reported that someone approached the clerk, displayed a handgun, stole an undisclosed amount of currency and cigarettes, and then fled the area. No one was injured during this incident.

The suspect is described follows: Male, black, possibly in his early 20’s, short stature and thin build. He was reported to be wearing dark colored clothing and a dark colored hat.

If anyone has information regarding this incident, they are encouraged to contact the Naperville Police Department at 630-420-6666 and ask for the Investigations Division.

Unemployment rate down in 13 metro areas

The unemployment rate decreased over-the-year in November in 13 Illinois metropolitan areas and increased in one, according to preliminary data released last week by the U.S. Bureau of Labor Statistics (BLS) and the Illinois Department of Employment Security (IDES).

Data also shows the number of nonfarm jobs increased in nine Illinois metropolitan areas, decreased in four, and was unchanged in one.

“As job growth continues to be strong throughout the state, Governor Pritzker will continue to build on the momentum of the past year to expand long-term economic success,” said Deputy Governor Dan Hynes. “Illinois’ bipartisan balanced budget and the historic Rebuild Illinois infrastructure plan are making critical investments and creating an economy that works for everyone.”

The industry sectors recording job growth in the majority of metro areas included Government (11 of 14), Mining and Construction (9 of 14), Transportation, Warehousing and Utilities (9 of 14), Education and Health Services (9 of 14) and Leisure and Hospitality (8 of 14).

The St. Charles 708 Community Mental Health Board will consider requests for funding for fiscal year 2020-2021 at its annual meeting on Feb. 27 at 6 p.m., in City Council Chambers, 2nd floor, 2 East Main Street.

The Mental Health Board has allotted approximately $592,000 in funding for organizations that serve the residents of St. Charles by providing services related to mental disorders, developmental disabilities, substance abuse, and drug abuse in fiscal year 2019-2020.

If an agency would like to inquire about eligibility, or to be put on the agenda, please reference the application on the Mental Health Board page of the City’s website: www.stcharlesil.gov/government/mental-health-board. Or, contact Sharon Bringelson at 630.762.6908 or sbringelson@stcharlesil.gov.