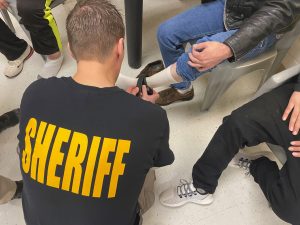 In addition to remarks from Ryan and Norful, the celebration will feature oratorical and musical performances by local students, a highlight of mentoring programs in Aurora, and a presentation of the Donna J. Williams Service Awards and the Mayor’s Service Above Self Awards.

Norful is a two-time Grammy award-winning recording artist and an internationally-known musician, composer, and preacher. He has had three Number 1 Billboard albums and has sold over two million records worldwide.

The event is free and open to the public. For more details, including registration to volunteer during the 2020 MLK Day of Service, visit www.aurora-il.org/MLK.

Waubonsie Valley High School’s parent group PAGES invites community members and students to a Celebration of Life Honoring MLK Jr. from 12 to 3 pm on Monday, January 20, in the WVHS cafeteria.

Several service opportunities will be available, including Operation Gratitude, Blessings in a Sock for homeless, and care cards for Phil’s Friends. Organizations that will be supported are Hesed House, Operation Support Our Troops, Wayside Cross Ministries and Our Lady of Mercy Catholic Church.

Included in the celebration will be a live DJ, refreshments, and entertainment.

Cagann will serve until a selection is made for the chief position. He will be responsible for leading the department of 133 fire and emergency personnel at seven fire stations within the 38 square miles of Elgin and with an annual operating budget of nearly $30 million.

Cagann brings 27 years of experience with the Elgin Fire Department. He was hired as a firefighter in 1993 and promoted to lieutenant in 2001, captain in 2008 and battalion chief in 2015.

Cagann was then appointed to assistant fire chief in 2017 at the onset of David Schmidt’s chief tenure. During that time, Cagann has distinguished himself as an integral leader in the efficiencies and advancements the fire department is practicing.

His appointment comes after  David Schmidt retired after 30 years with the Elgin Fire Department, the last three years as chief. Schdmit will continue his career as the Fire Chief in Carrboro, North Carolina.

The popular “Old House, New House Home Show” is coming to Pheasant Run in February, despite recent news that the resort property is set for online auction that starts Jan. 27.

The home show, set to take place Feb. 7 through Feb. 9 at the St. Charles resort and convention center, is billed as “the largest, most innovative and longest-running home show in the Chicago area.”

The Old House New House Home Show consistently sells out with a waiting list of companies eager to participate. The show’s 92% exhibitor return rate is a testament to its popularity.

A portion of the ticket sales for the event support the Northern Fox Valley Habitat For Humanity.

The Kane County State’s Attorney’s Office said this week that data from 2019 indicates a 4 percent increase in felony prosecutions year over year.

Kane County State’s Attorney Joe McMahon said this week that his office will have a detailed breakdown of felonies and other crimes in its annual report in February.

A published report said 2019 Kane County felony case filings were up 4.4% compared to last year and have increased four years in a row.

McMahon said the additional case load was not likely to affect staffing in the office.

According to WebMD, atherosclerosis — sometimes called hardening of the arteries — can slowly narrow the arteries throughout a body. Most of those deaths are from heart attacks caused by blood clots.

Elgin police reported Monday via Facebook that Newsome was killed shortly before 4:49 p.m. Sunday in a single-car crash on Dundee Avenue.

The preliminary investigation indicated that the vehicle drove south across northbound lanes, striking a utility pole and ultimately coming to rest in the 1100 block of Dundee Avenue (IL Route 25). A passenger of the vehicle was uninjured, police said.

Newsom was pronounced dead at Advocate Sherman Hospital, then transported to the Kane County morgue, where an autopsy was performed on Wednesday.

The Cook County Sheriff’s Office released a statement about the incident late Sunday evening, saying the crash was caused by a medical emergency:

“The Cook County Sheriff’s Office was notified that an off-duty Sheriff’s Police sergeant suffered a fatal medical emergency in Elgin on Sunday, Jan. 5. We understand the Elgin Police Department responded to the incident and are referring any additional questions to that agency at this time. We are shaken by this loss and our hearts go out to his family.

The Geneva Chamber of Commerce will highlight culinary excellence by offering Geneva Restaurant Week – an entire week of delicious discounted dining at some of the City’s finest eating establishments.

From Monday to Sunday, Jan. 20-26, foodies will be able to eat their hearts out at participating restaurants that will offer special menus. Offers may include a percentage off, special item(s) or a special menu. Some deals are per person, some are for two and some are options you will only find during Restaurant Week. For a list of participating restaurants, visit the Chamber’s website.

Explore scrumptious eats and leave the cooking utensils and dishes at home as we celebrate Geneva’s thriving and unique culinary scene.

Tickets and passes are not necessary for this week of discounted dining; show up at any participating location or call ahead to make a reservation to ensure your chance to indulge with these deep discounts.

For additional information, please call a participating restaurant or the Chamber at 630-232-6060.

The East Aurora High boys and girls varsity basketball teams will renew their rivalry with West Aurora when they travel to West for a crosstown match-up on  Jan. 18.

Tickets will also be available at the door at West Aurora.

“The Moral Wounds of War” will be explored at theJan. 21, dinner meeting of Navy League Aurora Council 247.

Additionally, he will discuss how growing up in Chicago influenced his direction in life. A highly decorated Vietnam War veteran of two combat tours, he founded MOUSA after recognizing that many veterans return to civilian life with wounds that affect them morally and religiously.

General Mukoyama retired from the Army in May 1995, after more than 30 years of active and reserve service.  During active duty, he served in the demilitarized zone in the Republic of Korea and as an infantry company commander in the 9th Division in Vietnam.  He was the youngest Army general officer in 1987 and was promoted as  youngest major general in 1990.

In 1989, he became the first Asian-American in U.S. history to command an Army division.

Since his retirement from active federal service in 1995, Gen. Mukoyama has volunteered in numerous organizations, both governmental and non-profits.