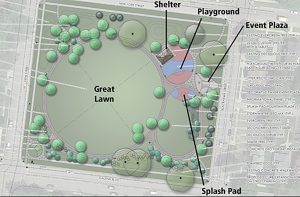 The currently empty city block will be developed into a park and named “Blackhawk Park” for the West Aurora High School structure that once stood there. (Chronicle photo)

A new development coming to Aurora’s near west side will officially be known as “Blackhawk Park” after the Fox Valley Park District Board of Trustees gave its approval last week.

Located at the intersection of Galena Boulevard and Blackhawk Street, the five-acre site was where the original West Aurora High School was built over a century ago. After the building was torn down in 2015, the City of Aurora deeded the land over to the Park District.

Last month, the Park District reached out to the public for its input on naming the new park. Four suggested names were offered, but the write-in campaign for Blackhawk Park resulted in a landslide vote.

Of the 770 votes tallied through the online poll, 445 of those (58 percent) were cast as a write-in for Blackhawk Park.

The Park District’s Board of Trustees approved the public’s recommendation by a 7-0 vote. Construction of the new park is scheduled to begin in early summer, with completion targeted for the fall of 2017.

Two teenagers found dead in the backseat of a vehicle in St. Charles last month reportedly died of carbon monoxide intoxication, according to the Kane County coroner’s office.

St. Charles Deputy Chief David Kintz said police and members of the fire department responded to a call for a suspicious vehicle that was parked in the a lot in the 0-99 block of N. 17th Street at around 8:08 a.m. on March 16.

Upon their arrival, officers located Adalina Elizabeth Donoso, 18, of Racine, WI, and Kody Dietrich, 18, 1600 block of Indiana St., St. Charles, unresponsive in the vehicle’s back seat.

Last week, the coroner released the cause of death and investigators began to determine how the intoxication occurred.

According to Kintz, investigators looked at the 2001 Toyota Camry the pair was found inside of for any clues that would assist in determining what happened. During the search, it was found that the manifold was not connected to the exhaust tailpipe.

“This was the result of recent do-it- yourself work performed on the car,” Kintz said, and meant that the exhaust emptied into the engine compartment instead of out the tailpipe, causing the car to fill with deadly gas.

Investigators conducted a test with the vehicle with the assistance of the St. Charles Fire Department. After 35 minutes with the engine running, tests indicated Carbon Monoxide levels of 1180 PPM.

“This is an extremely dangerous level,” Kintz said. “Anything concentration over 30 ppm is considered to be hazardous.The findings of the investigators are consistent with the coroner’s report. There is no indication this is anything other than a very tragic incident.”

The Longmeadow Parkway project was scheduled to move into its 2017 construction phase this week.

Work is expected to include pavement removal and widening work on the following sections:

Initial work will be complete in about two weeks, weather permitting, after which pavement, storm sewer installation and all of the remaining work items of the project will take place. Construction on this portion of the Longmeadow Parkway corridor is scheduled to be complete by the end of November 2017.

The roads will remain open during construction, but may be reduced to one lane or require temporary daily lane closures for the temporary pavement installation and other anticipated work.

The Longmeadow Parkway Bridge Corridor is a planned tree-lined parkway and new Fox River bridge crossing with a landscaped median, approximately 5.6 miles in length, running from Huntley Road to Illinois Route 62. The proposed road passes through portions of the villages of Algonquin, Carpentersville and Barrington Hills, as well as unincorporated areas of Kane County.

Additional information is available on the Longmeadow Parkway page of the Kane County Division of Transportation website.

Only one-year rabies vaccines will be offered. It is required that all residents of Kane County purchase a registration tag at the time the vaccine is administered.

No appointment is necessary. Pets should be either on a leash or in a carrier while at the clinic, as well as handled by an adult, 18 years or older.

If a pet is neutered or spayed, the cost for the rabies vaccine and registration tag is $20; the cost is $35 for non-neutered pets. Seniors pay only $10 for the vaccine, and the tag is free.

KCAC is also offering microchipping for $15 during the clinic. Microchipping a pet is one way to bring your pet home if they should ever get lost. Most police departments and vet clinics can scan a pet with a chip scanner. All an owner needs to do is keep the information with the chip company up-to-date.

Additional clinches are scheduled on May 24, June 17 and on a July date to be determined plus more in August, September and October.

Dates are subject to change, so check KCAC’s website: www.kanecountypets.com for updated information.

As part of the sixth National Mayor’s Challenge for Water Conservation, Elgin Mayor David Kaptain is encouraging Elgin residents and businesses to conserve water, save energy and reduce pollution throughout the month of April.

During “Earth Month,” Elgin will compete against other cities nationwide to be considered the most “water wise.” Participants can enter their pledges on behalf of Elgin, Illinois at mywaterpledge.com.

Last year, residents from over 4,100 cities in all 50 U.S. states pledged to reduce their annual consumption of freshwater by 1.9 billion gallons, reduce waste sent to landfills by 42 million pounds and prevent more than 87,000 pounds of hazardous waste from entering our watersheds.

The challenge goes beyond recent drought issues and looks at the ways our water use will affect the future of our communities — from how we grow food to reducing polluted runoff.