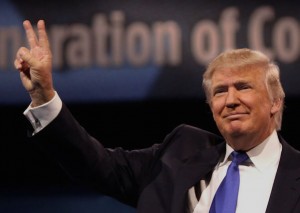 West suburban supporters of Donald Trump say the GOP candidate and businessman is a “breath of fresh air” for the party. (Photo courtesy www.donaldjtrump.com)

David Howard, a longtime Democrat, voted for Barack Obama in 2008 and 2012, but feels betrayed by man he supported.

“He broke my heart,” the Aurora resident said. “He did not do anything to help poor people. He ran away from people with problems. The only thing he accomplished was making money for the investors on Wall Street.”

That is why Howard held a gathering for Donald Trump supporters Saturday night at his home, where they got results from four Republican presidential primaries and got to know each other before things heat up in Illinois leading up to the March 15 primary.

Howard has 60 Trump yard signs at his home near Aurora University and is ready to distribute them to supporters, saying he will have no problem doling out the campaign placards.

He said Trump is hitting a chord with people and that rattles the Republican Party establishment.

“All the Republican elite, (New York Times Op-Ed columnist) David Brooks and (newspaper columnist) George Will would not be able to control what the party does,” Howard said. “They would be out within 24 hours (of Trump being elected),”

He said the Democrats have stopped the careers of working people with their laws, citing the North American Free Trade Agreement, which he said led to the closing of 55,000 American factories.

“I have been a bankruptcy lawyer for 25 years. I have never seen it this bad,” Howard said. “I have one client who worked for Lucent Technologies making $100,000 a year. They told him if he moved to China he would still have a job.”

Mike Foote, chairman of the Geneva Township Republican Central Committee, said Trump is a breathe of fresh air for the party.

The Geneva GOP chair said Trump needs to learn when to stop talking for his own good, but added that filter will come with a good crew of people surrounding him.

“If he does half of what he says he will do, we will see big progress,” Foote said.

Jennifer Nevins is a Trump delegate, saying she backs the businessman and his direction for America.

“I am very comfortable with him,” the Aurora resident said. “He speaks to the issues.”

She said she would not vote for Democratic frontrunner Hillary Clinton just because she is a woman.

“I don’t vote by gender,” Nevins said. “I don’t see her as a role model. I think we need a president strong enough to bring changes, someone who will say ‘I have my own way to do it.’ When I see Hillary Clinton, I don’t think ’empowered woman.’ ”

Bill Broderick of Geneva, primary author and editor of the Kane County Patriots website, is a conservative and calls himself an activist in the cause of freedom in America. He said Trump is the agent of change the country needs.

He views himself as part of the Tea Party, but doesn’t use that name because of the negative connotation it has picked up. Broderick feels that leaders of the Republican Party would rather have Hillary Clinton as president than Donald Trump.

“These people have an expiration date,” Broderick said.