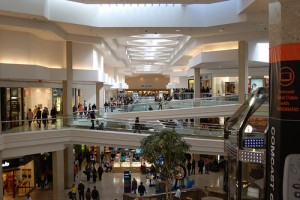 Woodfield Mall couldn’t save Schaumburg residents from having to pay police and fire pensions. Photo by Joon Han

Even Woodfield Mall couldn’t save Schaumburg residents from having to pay police and fire pensions.

For more than 35 years, the shopping mecca generated enough revenue for the village to forgo having its residents pay property taxes to the municipality.

However, in 2009, rising pension costs contributed to the village establishing its own property tax levy.

“It was a component of why a property tax was instituted in 2009,” said Village Manager Brian Townsend. “Pensions continue being a challenge for us.”

The northwest suburb of nearly 75,000 residents sees more than 38 percent of the revenue from its tax levy go toward police and fire pensions.

“It’s a complicated topic. It is a big issue for us,” Townsend said. “It is a significant portion of the budget. To drive that home, nearly $8 million a year goes toward police and fire pensions.”

One independent research and education organization put the village’s pension issue at the “critical” level.

“It’s been a significant increase,” Townsend said of village pensions. “The benefits have been enhanced over the years. The state increases the benefits and we pay the bills.”

Ben VanMetre, director of pension reform for the Illinois Policy Institute, said that is one of the biggest problems: the state sets the rules, but local municipalities are forced to pick up the tab.

“Local governments have no control over pensions,” VanMetre said. “The state mandates the system. The state sets the benefits level. The retirement age is set by the state.

“It is really unfortunate because pensions are one of the quickest growing costs for municipalities. They can’t keep up with the payments.”

Springfield is one of the hardest hit cities in the state. All the money generated from the city’s property tax is going toward pension payments. There is not enough money from other sources to keep the municipality afloat, VanMetre said.

“The city has had cuts in services,” VanMetre said. “Springfield has laid off public employees; it has closed libraries. There are fewer police officers on the street.”

An Illinois Policy Institute analysis of the state’s 20 largest cities with local pensions, showed that only three – Bolingbrook, Naperville and Oak Lawn – are not at the “critical” financial level due to pensions. And those three are all in the second-to-worst category, “extreme risk.”

Pension debt in the state has gone from $1 billion to $12 billion, according to the IPI.

VanMetre said a move North Riverside made may be one that other municipalities take to get themselves out of pension debt.

Defined contributions are equivalent to a 401(k) where employees govern and control their retirement contributions as opposed to government pensions run by legislation.

North Riverside kept their emergency personnel’s salary the same, but simply switched them to be employees of the same firm that has provided the village’s ambulance service for years.

“It is a unique way to fund pensions, going through a private provider,” VanMetre said. “It is not a silver bullet. It may not be the best way for everyone, but it is working in North Riverside.”

Lincolnwood is also being creative. It has had its firefighters as contract personnel since 1990 and is now looking at imposing a gas-tax increase to pay for police pensions.

“It will be a trend that local governments find creative ways to fund pensions,” VanMetre said. “It probably does not make sense for every community to have private fire departments, but there are a lot of volunteer departments. That’s another option.”