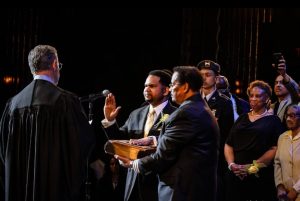 Hundreds of supporters packed the Paramount Theatre on Tuesday, May 9 to witness the swearing-in of Aurora’s 59th mayor, Richard C. Irvin in an inauguration ceremony like no other in the city.

“We are thrilled to have you all here,” outgoing Mayor Bob O’Connor told the enthusiastic crowd. “This is without question the largest number of people that have ever attended.”

The event drew dignitaries from the city, county and state levels, and supporters of all ages who wanted to witness Irvin’s longtime dream come to fruition.

“(Richard) was born and raised right here to a single mom in public housing,” City Spokesman Clayton Muhammad said, introducing the new mayor. “He had a dream that he could lead this city…He’s proving to all youth that you can change the narrative. You can shed the stereotype. It can be done.”

With that, the gavel was passed from O’Connor to Irvin, and a new era was set to begin.

“Being mayor was a dream I worked toward for over 20 years, and now here I am,” Irvin said. “As I stand before you today, I give you my word that I will assume my duty as mayor with the utmost importance and dedication…It’s time for us to look toward the future and build our future.”

Before he was sworn in by Judge Joseph Birkett, the appellate court judge spoke a few words about the city’s new leader.

He identified Irvin as a high-energy, team player, who will “lead the city of Aurora like never before.” 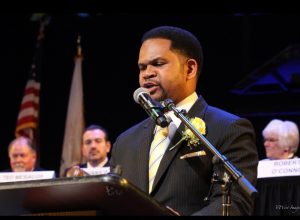 Richard C. Irvin addresses the audience at his mayoral inauguration on Tuesday, May 9 at the Paramount Theatre. (Photo courtesy of city of Aurora)

But, the gavel couldn’t be passed without acknowledging the work of outgoing Mayor O’Connor, who has spent more than three decades serving the city as an elected official.

“The scriptures say we need someone to stand in the gap, and that’s what we had in you for the last six months,” Ninth Ward Alderman Ed Bugg told O’Connor. “To the interim mayor, our hats off to you. You did a fantastic, fantastic job.”

“This has been a tremendously fulfilling and meaningful part of my life,” O’Connor said. “Thank you very much to the citizens of Aurora for the confidence you’ve shown me and the support you’ve given me in the past…Thanks to Tom Weisner for all his work and achievements for the city of Aurora.”

During the event, O’Connor was sworn in as Alderman at Large, along with several other aldermen who took their new oaths. Ald. Juany Garza, Ald. Bill Donnell, Ald. Scheketa Hart-Burns, Ald. Edward Bugg and Alderman-elect Judd Lofchie were all sworn-in.

Outgoing 10th ward Ald. Lynne Johnson, who did not run for re-election, spoke briefly before giving up her spot at the city council table.

“First and foremost, I would like to thank the voters for voting for me and supporting me for the last four years. I wish my successor the best of luck in representing the residents of Ward 10,” she said. “It was my privilege serving with you and I know you will continue serving the city well.

“To Mayor Irvin, thank you for your confidence and support. I’m confident that great things are in store like never before for the city of Aurora during your tenure.” 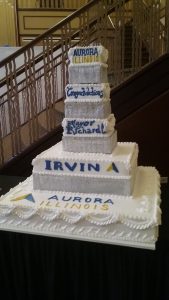 A cake celebrating the inauguration of Richard C. Irvin as Aurora’s new mayor sits in wait during festivities at the Paramount Theatre on Tuesday, May 9. (Photo by Erika Wurst / for Chronicle Media)

During his speech, which garnered a standing ovation and a roar of applause, Irvin addressed residents with his hopes for the future.

He said it is time to come together as “one Aurora”. He talked about bringing in families and developments and building safer streets. He talked about attracting new businesses and leading in unity.

“I am being handled a gavel that is rich with history and the burden of responsibility,” he said. “I can’t do this by myself. I want to know, who’s with me?”