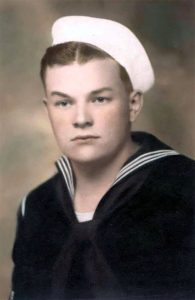 Radioman 2nd Class Walter H. Backman will be laid to rest in a Batavia Cemetery on Memorial Day. He died in the 1941 Japanese attack on Pearl Harbor while aboard the USS Oklahoma. He was identified in 2015 as part of a Defense Department effort to identify USS Oklahoma remains.

The excessive heat expected today has prompted the city of Naperville to cancel is annual Memorial Day parade.

The parade was scheduled to kick off at 10 a.m.

On its Twitter page, the city posted this statement:  “Due to excessive heat, the Memorial Day parade in downtown Naperville has been canceled. The 11 a.m. ceremony in Central Park will still take place.”

The Chicago area is expected to set a record today while reaching a heat index exceeding 100 degrees.

Checking the social media accounts of communities in the western suburbs it appears others are expected to go on with their parades and events as originally planned.

In Batavia a sailor killed in the 1941 Japanese attack in Pearl Harbor will be laid to rest in the Batavia Cemetery today, May 28.

The internment of Radioman Second Class Walter H. Backman is among highlights of Memorial Day observances planned throughout the western suburbs next week.

Backman, 22, was was aboard the USS Oklahoma which capsized after multiple torpedo hits on Dec. 7, 1941. He was among 429 crew members killed.

Only 35 of the deceased were identified immediately following the attack while the rest of the unidentified dead were buried as unknowns in plots at the National Memorial Cemetery of the Pacific.

In recent years, the Defense Department sought to identify USS Oklahoma sailors. Remains were exhumed in 2015 and DNA identification techniques — unknown in 1941—  led to the identification of 122 men to date, including Backman.

Born in Wilton, ND,  Backman moved with his family to Aurora prior to enlisting in the Navy.

The U.S. Navy will conduct the service with Rear Admiral Carol Lynch presiding. It will  include a seven member honor detail, according to Jacob A. Zimmerman, Superintendent of the Veterans Assistance Commission of Kane County.

Other commemorations are scheduled for Memorial Day (Monday, May 28) unless noted:

Memorial Day Celebration will be held in the center of town and will include a parade, water fights  and Fay’s BBQ pork chops.

Memorial Day ceremony at the Sunken Garden at Common Park, noon. Members of the Lombard Veterans of Foreign Wars Lilac Post 5815, the Lombard American Legion Memorial Post 391, Lombard Historical Society, local scouts, students of Glenbard East High School, and local residents will participate and pay tribute to the 100th anniversary of the end of World War I.  Featured speaker  Dennis McNicholas will read a poetic selection pertaining to the end of WWI. A wreath laying ceremony at the Lombard Memorial Marker, which contains the names of Lombard residents who served or were killed in the Civil War, the Spanish American War, World War I, World War II and Vietnam War.

Monday, May 28, 11 a.m.  Memorial Day Ceremony.  The Villa Park Veterans of Foreign Wars (VFW) Post 2801 and the Village of Villa Park honors those who have served in the military during times of conflict or war at Cortesi Veterans Memorial Park. In the case of inclement weather, the event will be re-located to the VFW Post 2801 Hall, 39 E. St. Charles Road.

Wheaton Memorial Day Parade, 10 a.m., will head down Main Street, concluding with a ceremony at the Wheaton Cemetery on Elm Street.

Memorial Day Parade, 11 a.m. The parade will begin at 11 a.m. at Addison Road and Elizabeth Drive and end at Veteran’s Memorial Park, 269 W. Irving Park Road. At the conclusion, a short memorial service will be held on the grounds of the Veteran’s Memorial.

Aurora’s Memorial Day Parade, noon, features the team:  “In Memory of Many…In Honor of All.”  Parade will begin at the intersection of Benton and River, head east on Benton, north on Broadway, west on Downer Place and ending at River Street. The Memorial Day Reviewing Stand will be in front of the David L. Pierce Art and History Center at 20 East Downer Place. Bronze Star recipient and native Auroran, Sergeant First Class (SFC) Christopher Hess will serve as parade Grand Marshal. Hess currently serves as Career Counselor of the Illinois National Guard Armory at East Aurora High School.

The parade is the culmination of a Vets Week in Aurora that begins on Armed Forces Day through Memorial Day and includes a 5K fun run, resource fair for vets, and a picnic and patriotic concert.

The Batavia VFW will hold a service at the Riverside banquet facility, 10 a.m.  A traditional herring breakfast will be prepared by members of the Batavia Viking Ring Lodge will be served beginning at 7 a.m.

Parade steps off at 6th and Main Street, 10 a.m.  A VFW/American Legion Open House takes place immediately following the parade at 311 North 2nd St., Unit 109, St. Charles for all veterans and their families.

Memorial Day Activities.  Veteran’s Memorial Plano at Route 34 and Center Street, 10:30 a.m.  A recognition of veteran’s bricks added this year.  Color guard, scouts and school band will march to the Little Rock Township Cemetery on North Center Street for a program that begins at 11:30 a.m.