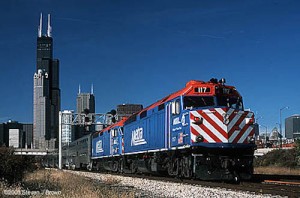 Metra plans to rotate the 11 Wi-Fi cars among each of its lines throughout the six-month pilot program. (Photo utc.uic.edu)

Metra announced last week that it has completed installation of cellular Wi-Fi hotspots on one railcar for each of its 11 lines as part of a pilot program to determine whether the technology can provide free and dependable Internet access to customers onboard commuter trains.

The western suburbs in DuPage, Kane and Kendall counties, are served by three Metra lines — the Milwaukee District West Line, the Union Pacific West Line and the BNSF Line.

“We continue to explore ways to provide free Wi-Fi on our trains and hope our customers will tell us if they find these new hotspots valuable,” said Metra Executive Director/CEO Don Orseno. “If it’s financially feasible and our customers like the free service, our agency would seek funding or sponsorships to install Wi-Fi on more of Metra’s railcars.”

The six-month pilot program is expected to cost approximately $35,000.

The pilot program is similar to one recently launched by the Northern Indiana Commuter Transportation District on its South Shore Line. Like the NICTD program, this Wi-Fi service is available on a car-by-car basis instead of a full train.

In general, the hotspots are limited to a 1-megabyte download speed per user. Checking email and Internet browsing are the intended uses of this service, not streaming video. Metra has posted information onboard to notify customers that streaming video will likely impair service and that there may be dead zones along the route.

Metra will rotate the 11 Wi-Fi cars among each of its lines throughout the pilot program. The Wi-Fi cars are labeled with decals on the exterior and will be positioned as the end car on the train (opposite end from the locomotive), when possible. Conductors will also alert customers to the location of the Wi-Fi car through onboard announcements on all outbound trains.

To access the free Wi-Fi service, customers can simply select “Metra Wi-Fi Onboard” from the list of options on their smartphones, tablets or laptop computers. Once selected, they will have to agree to the terms and conditions to gain access to the service.

Customers can then visit www.metrarail.com/wifisurvey to provide feedback on the quality of Wi-Fi service.