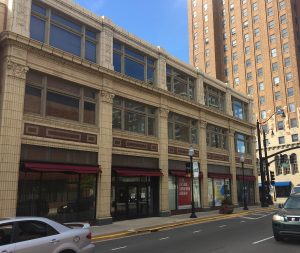 With a real estate closing this month, the former Waubonsee Community College building in downtown Aurora will soon become a destination arts center.

As crews began interior rehabilitation last week, officials are planning for a new era in the resurgence of the arts in the City of Lights.

Vacant for more than five years, the former college is located directly next door to the Paramount Theatre. Invest Aurora purchased the building last year for $350,000 in order to facilitate the development of the Arts Centre. The 80,000-square-foot Aurora Arts Centre is a $35 million investment and the next major milestone in Downtown Aurora’s revitalization effort.

“We have been working to make this happen for two years and are excited to see construction begin,” said Tim Rater, Paramount Theatre President & CEO. “This is an important opportunity in making the performing arts accessible for every age and socioeconomic background, while contributing to the future growth of Aurora’s downtown.”

In partnership with the Paramount Theatre, the city of Aurora, and the Illinois Housing Development Authority, The Community Builders, Inc.— a leading nonprofit developer of affordable, mixed-income and mixed-use developments — will transform two conjoined historic buildings into the Aurora Arts Centre, which will provide:

“The Community Builders is committed to the continued revitalization of downtown Aurora, and we’re thrilled to begin the interior work on the Aurora Arts Centre,” said Will Woodley, TCB’s director of development, Chicago. “The center will play an integral role in bringing more jobs, more people and more economic and cultural vitality to downtown Aurora.”