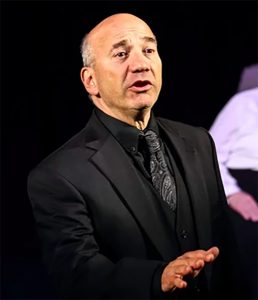 The 2019 MFA Acting class at Northern Illinois University may be finished with academic tasks in DeKalb, but they haven’t moved far away.

Many of them, as well as a host of other School of Theatre and Dance alumni, have relocated just 24 miles east in St. Charles.

The talented group of recent alums have established the Kane Repertory Theater in an effort to produce high quality theater for audiences in Chicago’s western suburbs.

“We have this culture that NIU instilled in us of a strong integrity in terms of our craft,” said Daniil Krimer, the new group’s artistic directory.  “When we were thinking about what happens next after we graduate, we thought about how we could control our destiny as artists.  That’s why creating a theater company was so attractive.  We can control the kind of product and the kind of work that we want to do and want to see.”

Managing Director Avery Bowne says the company has been impressed with the support they’ve already received from their new community.

“We’ve had a lot of great community engagement,” he said.  “The people of the Fox Valley have been amazingly supportive, and I think that is such a big help for us to get rolling. We’ve heard from a lot of people who are excited about having a professional theater company here, and we are excited to build that connection here.

“A big reason why we chose the western suburbs is that there’s an ecosystem out here, it’s the kind of community that really values the arts.  Right now they have very little opportunity for engagement from artists.  We think there’s an opportunity to build the kind of theater here that we can scale to grow and do a lot of good in the world.”

Bowne said the long-term plan is to create a deeper community connection, make a lasting home, and build a stable foundation to achieve our mission of being a leading regional theater troupe.

Including Krimer and Bowne, Kane Repertory Theatre’s acting company is made up of 14 members of the NIU School of Theatre and Dance Master of Fine Arts – Acting graduating class of 2019.  The others are Elise Delap, Joe Edward Metcalfe, Jessica Roark, Al Herrmann, Emily Roeder, Bryant Hayes, Emily Vitrano, Shannon Coltrane, Ellen Campbell, Joel Ottenheimer, Daniel Kies and Ken Miller.  A pair of recent graduates of the Bachelor of Fine Arts in Acting program at NIU, Halle Hoffman and Justin Cahill round out the ensemble.

But the NIU talent extends beyond the actors.  The design and technical company at Kane Repertory Theatre is composed of four recent graduates or current students of the School of Theatre and Dance’s master’s and bachelor’s programs in design technology.

Morgan Saaf-White is the company costume designer, Ivy Thomas is the scenic designer, Will Richardson is the lighting designer and Jordan Clifton is stage manager.

The NIU connection for “Our Town” does not begin and end with all of these recent graduates and current students, however.  The cast also includes Dean of the NIU College of Visual and Performing Arts Paul Kassel, NIU Associate Vice Provost for Engaged Learning Renique Kersh and her son, Jayden Kersh.

“Paul is playing the stage manager,” Bowne said. “He’s the person who is going to be bringing the audience through the whole story. It’s an amazing connection because he has his MFA in acting from a prestigious program (Florida State University’s Asolo Conservatory for Actor Training), and he’s an Equity actor, which means he is part of the actor’s union, and that’s a standard of professionalism that is extremely valuable to us.

“Renique is a really big supporter of the arts, and it’s great to have her and Jayden.  He is a really great young man who has fallen in love with theater and we’re happy to help out with that passion.”

Jayden Kersh became interested in theater when he was cast as the lead in his third grade musical. To support his interest, his entire family (his brother John and his parents Renique and John) all auditioned at the Limelight Theater Company in Oswego.

Jayden has starred there in a variety of roles in productions of “101 Dalmatians”, “Winnie the Pooh”, “Lion King Jr.”, and others.  Renique was cast as Prospera in a gender swapped version of “The Tempest” and recently played Queen Catherine De Medici in “So Untamed” ,both at Limelight.

St. Charles Mayor Ray Rogina will make a special appearance at the October 18 performance playing the “angry man in the audience.”

“We chose ‘Our Town’ partially for it’s name recognition, so that people would be more likely to give it a shot,” Krimer said. “We’re bringing Chicago-level theater to their door and we know that if they have a really good experience, they’re going to come back.”

Tickets are $25 for adults, $22 for seniors and $10 for students. Oct. 11-12 performances are NIU Alumni Weekend at the theater and NIU alumni can save $5 off their tickets by using the code GoHuskies.  Tickets for all shows can be purchased at kanerepertorytheatre.com/box-office.