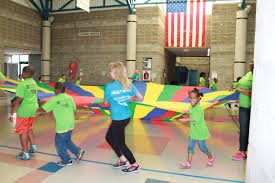 Children learn the importance of exercise at Hult Heath Center’s annual “Healthy Heroes” summer camp. Each year, over 500 at-risk children attend and learn about healthy living and the importance of respecting their bodies.

Officials at nonprofit agencies are holding their breath that proposed state funding cuts will be averted before Illinois’ 2016 budget goes into effect this summer.

RAMP, which helps people with disabilities live independently in Winnebago, DeKalb, Boone and Stephenson counties, gets 43 percent of its budget from the state, with much of that money going for staff. A double-digit funding cut from the state would almost certainly mean staff reductions.

A $300 million budget shortfall puts state funding for a variety of programs at risk.

The Child Care Assistance Program, touted by Gov. Bruce Rauner in his budget address as a vital state-subsidized program, is not safe despite that endorsement.

“The Child Care Assistance Program is out of money and families are worried about how to care for their children,” Rauner said during his budget address last month.

In calling for legislators to get on board with solving the state’s fiscal woes, Rauner invoked the state-subsidized program once again.

“It appears we are very close, literally days away, from a resolution. And every day counts,” Rauner said. “Members of the General Assembly – now is the time for action. It is time to solve this crisis. Let’s continue the Child Care Assistance Program.”

But whether the applause that followed Rauner’s call to save child-care subsidies translates into enough votes when tough budget decisions have to be made is anyone’s guess.

“It is too early to tell (what state funding cuts could mean),” said Andrea Parker, executive director of the Hult Center for Healthy Living, a nonprofit provider of health education and wellness services for people of all ages, based in Peoria. “Until the budget is more finalized, we just won’t know. I can make a blanket statement though that any cuts that support human services are detrimental to the community.

“Any cuts, whether in early childhood education or senior programs, are going to leave a huge deficit. There will be challenges.”

Parker said that no entity that gets state funding will likely be untouched by the budget cuts. She noted municipalities will likely take a hit and that will impact people as well.

“You cut funding for one and it is going to have a domino effect,” Parker said. “Multiple agencies will be affected, businesses will suffer.”

Parker, like officials with non-profits across the state that get a portion of their funding from Illinois, will have to wait and see just what the impact will be.

“We may have to tighten things a little, who knows how much as budget revisions occur,” Parker said. “It may be bad.”

Parker said residents can best help non-profits by talking to their local legislators about programs and what funding cuts could mean to local agencies.

Every cut will be felt.

Lopping off $6.6 million – just 0.01 percent of the budget – will eliminate the immigration services line item in the state budget. That service funds investments in Illinois’ immigrant communities and provides for a cost-effective way for the state to fulfill its legal obligation for language-appropriate services, according to the Illinois Coalition for Immigrants and Refugee Rights, based in Chicago.

“Cutting investments which promote five-fold returns is no way to solve the state’s problems – it will only exacerbate them,” said Lawrence Benito, CEO of ICIRR. “We need to continue investing in immigrant communities all over the state. This isn’t a partisan issue nor is it one that pits big cities against the rest of the state. Immigrants live and work in the red and blue districts alike, all over Illinois.

“We simply cannot afford to lose the work that these investments have funded. We hope the governor and the General Assembly will recognize the facts and keep this funding in place.”