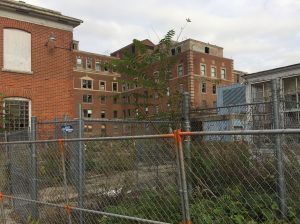 Owners of the old Copley Hospital have promised to board up broken windows as part of an agreement with the city of Aurora that temporarily holds off a lawsuit. (Photo by Jack McCarthy / Chronicle Media)

Facing a lawsuit from the city of Aurora, owners of the former Copley Hospital have agreed to secure the property, begin boarding numerous broken windows and consider options for removing asbestos.

Owners Raghuveer P. Nayak, Anita R. Nayak and the companies they control acted to address city concerns by Oct. 31, one day before the city planned to file suit in federal court.

Aurora planned the suit under the federal Resource Conservation and Recovery Act related to presence of asbestos a the former hospital unless the property was secured and asbestos removal began.

According to a city statement, the owners agreed to:[Text Wrapping Break]

“Because of the immediate corrective actions taken by Nayak, the city of Aurora will delay filing its lawsuit for an additional 45 days under an agreement reached by the parties,” the city said recently in a news release.

During that time, Nayak has agreed to conduct an active asbestos investigation and, at the conclusion of 45 days, must either present long-term plans to mitigate the danger by removing the asbestos or present verified plans to work with a reputable developer.

If neither condition is satisfied, the city will commence its lawsuit as planned.