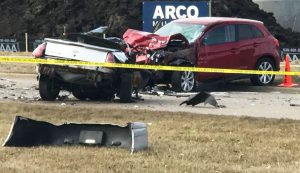 Two damaged cars are in a grass median on Aurora’s East New York St. on Wednesday after a police chase of a single vehicle following reports of shots fired south of downtown Aurora. Four people were injured — three seriously — in collisions near the Fox Valley Mall and another person arrived at a local hospital with gunshot wound after reports of shootings appear to have prompted the pursuit by police. (Photo by Jack McCarthy / Chronicle Media)

One man died and four others were injured after a gang-related shooting turned into a police chase of a suspect vehicle and ended with collisions near the Fox Valley Mall on the afternoon of Feb. 19.

Three people were initially reported to be seriously injured after the vehicle pursued by Aurora Police crossed into oncoming traffic and collided with other vehicles on East New York St. north of the mall. Another man was slightly hurt.

Erik Esparza, 24, of Aurora, was believed to have been the driver of the offending vehicle, according to police. He was transported by Aurora Fire Department paramedics to Good Samaritan hospital where he died from his injuries later that evening.

The DuPage County Coroner’s Office performed an autopsy on Feb. 20.

An unidentified 35-year-old man suffered a gunshot wound in a shooting believed to be gang-related and connected to the vehicle pursuit and subsequent accident. according to police.

The chain reaction sequence began around 1:30 p.m. when Aurora Police said they responded to reports of shots fired around the 600 block of South Broadway. A suspect vehicle — a grey Monte Carlo — was spotted and police began pursuit and attempt to initiate a traffic stop.

“The vehicle began driving erratically and crossed over into oncoming traffic on East New York Street before it crashed into multiple other vehicles near the Fox Valley Mall,” police said in an initial statement. “Three people were inside the suspect vehicle and have serious injuries. A driver of another vehicle was transported with minor injuries to an area hospital.”

A passenger inside the offending vehicle, Adrien Betsinger, 23, of the 500 block of Woodlawn Avenue, in Aurora, was charged in connection to the shooting, including one count of attempted murder, one count of aggravated battery with a firearm, six counts of aggravated discharge and one council of a felon possessing a firearm while on parole.