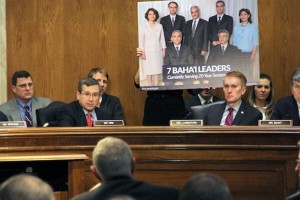 Sen. Mark Kirk (R-IL) at a March 12 hearing of the Senate Appropriations Subcommittee on State, Foreign Operations, and Related Programs.

Why the far-right Republicans who currently hold Congress in a choke hold have such a visceral hatred for this particular President may best be left to others, perhaps psychologists. But that hatred and contempt are there, shockingly illustrated by the GOP’s latest attack on President Barack Obama.

An open letter from 47 Republican senators (including Mark Kirk from Illinois) to the ”leaders of the Islamic Republic of Iran” warned that any negotiated agreement on Iran’s nuclear technology that did not have legislative approval could be undone by the next President “with the stroke of a pen.”

Usually, letters are written to convey information the recipient doesn’t know. But Iran’s leaders know that when government and governmental leaders are changed, agreements can change. Everyone knows this without being informed by letter. So, conveying new information to Iran was not the letter’s purpose.

Based on past performances — such as yelling “Liar!” during a State of the Union address — the reason for the letter was once again to humiliate President Obama.

For the GOP, hatred of Obama seems to trump everything else, including the very structure of American government.

And because hatred and spite beget hatred and spite there now is a drive that the 47 senators who signed the letter be prosecuted under the Logan Act, a felony. Passed in 1799, the Logan Act prohibits any citizen from engaging ”in any correspondence or intercourse with any foreign government with intent to influence measures or conduct of any foreign government in relation to any disputes or controversies with the United States.”

Fortunately, most Americans aren’t as hate-obsessed and monomaniacal as congressional Republicans. Of course, no senators will be prosecuted. This is still America, thank heaven.

But certainly it is fair to ask Republicans to examine what they do and why they do it. Perhaps they can ponder ways to be in opposition, but without the hatred and personal rancor.

Question and oppose foreign policy decisions, by all means. Congress has a vital role to play. But there is a line over which opposition becomes something counter-productive and ugly.

When they signed that letter, 47 United States senators crossed that line.