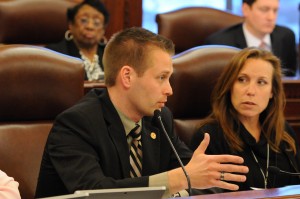 Rep. Joe Sosnowski (R-Rockford) is a sponsor of House Bill 261.

When it comes to how public officials are conducting the public’s business, more information is better than less.

But less information is what Illinois residents will receive if House Bill 261 successfully winds its way through the state legislature.

Now in Illinois, public bodies must publish their legal notices in newspapers. And Illinois newspapers are required to also post these legal notices on a single, public website, PublicNoticeIllinois.com.

Under the cloak of saving money, HB 261 would eliminate the requirement to publish legal notices in newspapers and instead allow public bodies to “publish the notice on an official government website instead of a newspaper.”

By allowing public bodies to publish legal notices solely on their own websites a virtual Tower of Babel of 8,000 websites would spring up in which information would be more difficult for the public to find.

Not to mention that unless information is published in newspapers, many residents will be frozen out of public information they need: one in three Americans doesn’t have access to the internet; neither do half of adults with disabilities and 53 percent of persons over age 65.

And then there is the problem of competence and willingness to follow the law. Illinois public bodies already are required to post on their websites meeting agendas and minutes. But the Illinois Press Association (IPA) has found that only about half do so.

So, why should Illinoisans believe officials will be more scrupulous with legal notices than they are with agendas and meeting minutes?

Forty-nine percent of 756 Illinois public bodies don’t even have a website. And only 11 percent of Americans have ever visited a government website.

Yet supporters of HB 261 contend the legislation is needed because publishing legal notices in newspapers is a financial hardship for governmental bodies.

But this is a paper tiger. The IPA found, for example, that Boone County in a year spent $17,000 on public notices out of a budget of $15 million, which is only .001 percent of the budget.

Laws like HB 261 just don’t work. Utah tried it and repealed it.

Residents filed suit claiming they were not informed of important government information.

“They looked stupid with the lawsuits,” said Josh Sharp, IPA director of government relations. “It was an abject failure. They spend more money on lawsuits than they saved by not publishing legal notices.”

HB 261 is so unnecessary. Illinois residents already have the most publicly visible delivery system for public information — the local newspaper, as well as a single website instead of a bewildering array of 8,000 websites.

More people see legal notices in the paper than they will on thousands of websites — even were we to believe that governments would mend their sloppy ways about posting information on their websites.

There just aren’t any good reasons for disrupting the way legal notices are presented to Illinois residents and taxpayers.

HB 261 would result in confusion and less-open government, which would be bad government.

The bill may come up for a vote in the next few weeks. We urge lawmakers to vote no.