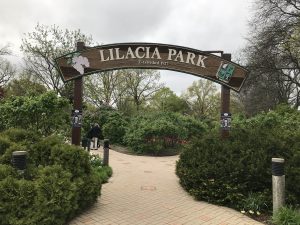 Nearly all events surrounding Lombard’s Lilac Days (May 1-17) have been cancelled, but downtown Lilacia Park remains open for visitors to view the blooming lilacs and tulips. (Photo by Jack McCarthy / Chronicle Media)

Summer hasn’t been canceled, but the continuing COVID-19 pandemic threatens to make it an empty one.

Organizers of many northern Illinois festivals, fairs and concerts have already called off or rescheduled late spring and early summer events.

Lombard’s colorful Lilac Festival (May 1-17) has been largely scratched, Aurora has canceled a series of community events through the end of May, Geneva’s nearly 70-year-old Swedish Days (June 23-28) won’t take place and Chicago has scrapped Blues Fest, Jazz Fest, the House Music Conference and Festival and the Gospel Music Festival.

And baseball — that dependable summer staple — remains on hold with the Cubs, White Sox and Kane County Cougars idle for the foreseeable future.

The 24th annual Blues on the Fox festival has been canceled, but most of the artists have agreed to find a way back to Aurora next year.

The event was originally set for June 19-20 at RiverEdge Park, 360 N. Broadway, Aurora.

“The safety and health of our patrons, staff and artists are our number one priority and we stand ready to do whatever is necessary to ensure that,” officials wrote in a letter to ticket holders.

Blues legend Buddy Guy was scheduled as a top attraction at this year’s festival. He’s now rescheduled to appear at the 2021 Blues on the Fox.

RiverEdge Park has also received commitments for the new dates from Southern Avenue for June 18, 2021 and Melody Angel, Billy Branch and Buddy Guy for Saturday, June 19.

RiverEdge is working with Kenny Wayne Shepherd and Mindi Abair to have them stay in the 2021 festival line-up. 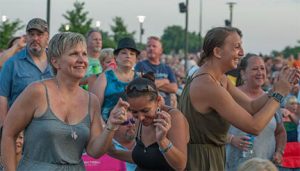 Still on — for now — are Naperville Exchange Club’s inaugural Ribfest in Romeoville (July 2-5), Taste of Chicago (July 8-12), Lollapalooza (July 30-Aug. 2) and a plethora of northern Illinois county fairs starting with Kane County in mid-July and running through Labor Day).

A 100-mile series of garage sales between Yorkville and Galesburg — More on 34 — is also still on for Father’s Day weekend.

Events this summer are fraught with potential peril with large crowds in close quarters that could potentially spread the virus. Gov. J.B. Pritzker continues to discourage large gatherings as coronavirus infections may be slowing but continuing to spread. 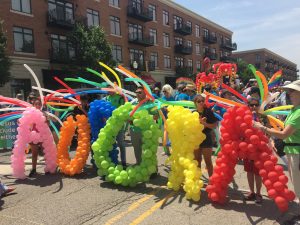 Aurora’s Pride Parade, originally planned for June 14, is among dozens of regional spring and summer events called off due to the COVID-19 pandemic. Image from the 2019 parade in downtown Aurora. (Photo by Jack McCarthy / Chronicle Media)

“Until we have a vaccine, which is months and months away, I would not risk having large groups of people getting together anywhere,” Pritzker said during an early April press conference. “I think that’s hard for everybody to hear, but that’s just a fact.”

Illinois remains under a stay-at-home order while most businesses and services remain closed through at least the end of April and schools closed for the academic year. With coronavirus cases now not expected to peak until mid-May, it seems likely that the order could be extended despite clamoring to begin to reopen the Illinois economy.

Chicago Mayor Lori Lightfoot told reporters it could be mid-June before a stay-at-home order is lifted.

In Aurora, wholesale cancelations were announced on April 3 for events through May and Memorial Day weekend.

“We are making this critical decision in the best interest of our entire community,” said Mayor Richard C. Irvin. “With such uncertainty, we must be overly cautious as we plan gatherings for the near future.”

Naperville’s Memorial Day parade has also been called off while Lisle’s annual Eyes to the Sky hot air balloon fest (July 4-6) is grounded.

The June 7 Mid-American Canoe and Kayak Race from St. Charles to Aurora has been canceled for the third straight year while Pride Parades in Elgin (June 6), Buffalo Grove (June 7) and Aurora (June 14) were also called off.

Chicago’s 51st annual Pride Parade is still scheduled for June 28, but an accompanying two-day street festival has been rescheduled for fall.

The village of Oswego has postponed its annual Wine on the Fox, originally scheduled for May 2 and 3, to continue the fight against coronavirus. A new date will be announced as more guidance becomes available from the Centers for Disease Control and state and local health departments. (Photo courtesy of Wine on the Fox)

For the first time in nearly 70 years there will be no Swedish Days in Geneva. The Geneva Chamber of Commerce canceled the six-day event, set for June 23-28.

“While this decision was difficult, we felt that it is for the safety of our Swedish Days visitors and participants,” said Paula Schmidt, chamber president said in a statement. “The advanced notice of this cancellation is a necessity at this time because so many of the details need to be finalized over the next few weeks.”

Even gambling has been curtailed. Illinois Lottery scratch-off tickets are still available and Mega Millions and Powerball games continue. But there’s no chance for a trip to a suburban or downstate casino or local video gaming establishment. The Illinois Gaming Board has shuttered all outlets through April.

Popular Chicago area museums also remain shut down for the time being.

But at Chicago’s Shedd Aquarium, that’s allowed Wellington, a rockhopper penguin, to wander the halls unimpeded and visit fish and other attractions. YouTube videos of his strolls have made Wellington an Internet sensation.