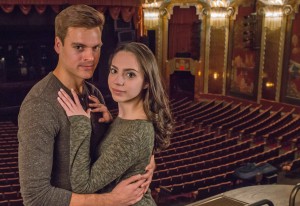 Zoe Nadal and Will Skrip will star in “West Side Story” at the Paramount Theatre in a production opening March 16.

Paramount Theatre will present what’s arguably one of the greatest musicals ever when the downtown Aurora theater stages a grand, sweeping production of Jerome Robbins’s “West Side Story” from March 16-April 24.

“West Side Story” is a Leonard Bernstein and Stephen Sondheim masterpiece and arguably one of the greatest love stories ever told in a musical.

The 19-member Paramount Theatre Orchestra, helmed by music director and conductor Tom Vendafreddo, make up the largest orchestra of the 2015-16 season, performing a beloved score including heart-wrenching ballads like “Somewhere,” steamy Latin beats in “America” and the soaring lyrics of “Tonight.”

Based on Shakespeare’s Romeo and Juliet, “West Side Story” is set in the blue-collar neighborhood of New York’s Upper West Side, where racial tensions are running high as residents try to grind out a daily living.

A turf war is being fought as the Jets, a white gang, and the Sharks, a Puerto Rican gang, battle over boundaries. In the heart of the turmoil, former Jets member Tony meets Maria at a local dance. The chemistry is instantaneous, and for a few hours, there is no race, no hatred, no barriers, just two young people in love. But Maria is the sister of Sharks’ leader Bernardo, and no one is going to make it easy for Tony and Maria to escape.

It makes no difference if you’ve seen “West Side Story” before or if you’ve never seen it at all. Like all the shows before them, Paramount’s creative team will take this production to a level that will make this the West Side Story you never forget.

There will be two certified sign interpreters translating all dialogue and lyrics into American Sign Language on Thursday, April 14 at 7 p.m.

Tickets are $41 to $56. The Paramount Theatre is located at 23 E. Galena Blvd., in the heart of downtown Aurora. For tickets and information, go to ParamountAurora.com, call (630) 896-6666 or visit the Paramount box office Monday through Saturday, 10 a.m. to 6 p.m., and two hours prior to evening performances.

“West Side Story” is rated PG. Parental guidance suggested. Some material may not be suitable for children.