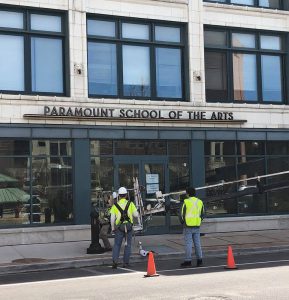 Exterior signage for the new Paramount School of the Arts was recently installed. (Paramount photo)

Downtown Aurora already has it’s crown jewel, the 1,888-seat Paramount Theatre, which enjoys a national reputation for its shows and historic architectural beauty.

Last Saturday the city celebrated the addition of a second jewel to that crown with the opening of the $35 million Paramount School of the Arts. The facility is housed in a building previously part of Waubonsee Community College on Stolp Street.

More than 1,000 people joined an array of local officials for opening day  ceremonies.

The new center is expected to be a boost to Aurora in several ways.

With it’s numerous rehearsal and performance spaces and music and dance studios, the facility will directly benefit the Paramount Theater and it’s many projects as well as the people of Aurora.

The school will offer dance, music and theater classes for people ranging in age from young children to seniors, numerous other classes like costume design, stage design and choreography. There will also be access to a  recording studio.

The new 167-seat Joanne McKee Studio Theater joins the Paramount Theater, with it’s 1,888 seats, and the more intimate Copley Theater across the street. Together they will allow allow the Paramount organization to grow the number of annual performances from the current 300 to more than 1,000.

During a media preview last week, Shannon Cameron, Director of Education and Community Involvement called the facility, “one stop shopping for the arts.” She said the intention is to offer the widest range of performing arts training possible, one that will pay dividends on many levels.

While one goal is to train people for professional theater, Cameron said, it will also give young people the sort of experiences that helps them grow personally and be better able to give back to society.

“We’re hoping this is a safe space for everyone in the community,” she said. “Where they have ownership of it.”

John Savage, a member of the Aurora Civic Center Authority and of Act 2, which is raising funds for the performing arts center, called the school’s opening a “brand new chapter” in the Paramount Theater’s history.

“It’s going to have such an amazing impact on people young and old, on downtown Aurora, on the City of Aurora and the entire Chicagoland theater community.”

Savage noted that the new school was the result of the dedication of many people who donated time and money—more than 5,500 individuals have contributed $4,625,000 to Act 2 so far. 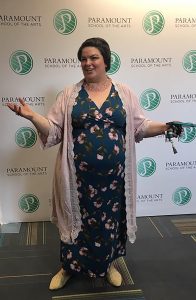 Shannon Cameron, director of Education and Community Involvement at the new Paramount School of the Arts in Aurora. (Photo by Bill Dwyer / for Chronicle Media)

Jonathon Hylton, President of the Aurora Civic Center Authority praised the hard work and vision of Paramount Theater President and CEO Tim Rater and recalled how things were seven years ago when they first endeavored to make the school a reality

“I remember when I first started, being told all the things that we weren’t at the Paramount,” he said. “(But) we’re not worried about what we are not, we are focused on who we are. And what we can do for this community.”

Hylton said the school will not just help train the next generation of theater professionals, but will be a creative force in the theater world, bringing new productions into being.

He noted that the previous night a play Paramount Theater helped create, August Rush, was performed in the main theater.

“We had a hand in creating a show that had (not existed) before,” Hylton said. “We were able to bring the show, with commercial producers, the Broadway union in New York, and writers to come together to create a brand new musical than can go from here to everywhere in the world.”

The new school will soon host a workshop in cooperation with Universal Studios to ultimately stage next years new production, The Secret of my Success.

“These are things that were never thought possible seven years ago,” Hylton said.

He said the school is “a fantastic opportunity” and a resource that will have a positive impact not just on the patrons who come to Aurora’s theaters, but on its citizens, young and old.

“The idea (is) to have the community involved, the idea to help grow the downtown, to bring the youth here, the next generation of theater goers (and) people who can act and perform here, in Aurora, and not have to go to another city.”

Cameron echoed Hylton’s sentiments, opining that the new performance arts center will “change lives,” as, she said, involvement in theater changed hers.

Having fun while you learn is also a key goal of the school. As a poster displayed at the Thursday luncheon read, “Let’s soar. Let’s play.”

Graham Isaacson attended the class with his wife and two children. He’s been involved with the school on its old site, and loves the new facility.

Attendees at last Saturday’s open house had an opportunity to register for the fall classes at discounted, early-bird rates.

Next fall will also see the launch of the school’s Musical Theater Institute, which will offer pre-professional training for high school students who plan to go on to perform professionally or study musical theater in college.

That program will be led by Paul-Jordan Jansen, who played the Cowardly Lion in Paramount’s The Wizard of Oz earlier this season, and earned a Jeff Award for Best Actor for his memorable portrayal of Sweeney Todd at Paramount.