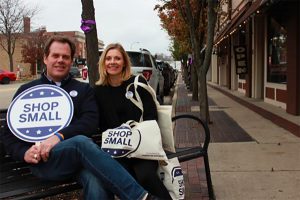 Downtown Geneva will be among the west suburban centers expected to be active on Nov. 24 for Small Business Saturday. (Geneva Chamber of Commerce photo)

Take The Paper Merchant, a downtown Geneva stationary store as an example.

In business since 1981 and located in a vintage building, The Paper Merchant will be among 150 Geneva businesses promoting local holiday shopping on Saturday, Nov. 24.

“Small Business Saturday is a wonderful day for us,” said owner Patricia Burnham. “The community really comes out. We know there are other options for people, so we do appreciate it when they do come out.”

Her store along with other local businesses will be offering free bags and giveaways that were provided by American Express.

The Small Business Saturday movement began in 2010 and now has the support of American Express, which helps give small businesses a time to shine this holiday season over big box stores.

Based on statistics from the U.S. Small Business Administration, there are more than 30 million small businesses in the United States. Collectively, they were responsible for the creation of nearly 70% of new jobs over the last seven years.

According to American Express, since Small Business Saturday began U.S. consumers have spent an estimated $85 billion at independent retailers and restaurants over an eight day holiday shopping period.

In Naperville, nearly 60 percent of Chamber of Commerce members are considered small businesses. Dog Patch Pet and Feed is one of them.

Open since 1972, Gordon said he does what he can to support “just about every local sports team, band squad, or other local kids group. That is our commitment to the community,” he said.

In turn, when it is time to shop for dog food or other pet supplies, he hopes community members come and shop at his establishment.

“The problem independent stores have is that they are competing against corporations who have millions of dollars to spend on an advertising budget,” Gordon said. “It would be foolhardy to compete,” he added. “However, Small Business Saturday gives us a platform to build upon.”

Dog Patch, which stopped selling dogs and cats about eight years ago and now coordinates low-cost animal adoptions, will be offering specials deals for the community.

And they will not be alone.

“Our downtown small business community makes up the soul and fabric of Naperville – from longtime businesses such as Beidelman Furniture, Dean’s Fine Clothing, Naperville Running Company, Naper Nuts and Sweets, Anderson’s Bookshop, Little Luxuries, Two Bostons, and so many more,” said Katie Wood, Executive Director of the Downtown Naperville Alliance. “We hope that people choose to support small businesses every day of the year, but especially on Saturday, Nov. 24.”

In nearby Aurora, Marissa Amoni of Aurora Downtown said: “This year’s Small Business Saturday is especially exciting with some new shops added to the downtown Aurora family. We are really proud of our many small businesses, and now we are thrilled to have even more offerings for local shopping.”

Amoni added that Branch Gardens, a new garden center located at the northwest corner of Benton and Lake streets, is offering Christmas trees starting the day after Thanksgiving.

Other shops for unique and local items include the Aurora Historical Society’s gift shop at David L. Pierce Art and History Center, 20 E. Downer Place; If These Walls Could Talk Custom Framing and Gallery; Endiro Coffee; the gift shops at SciTech Hands On Museum and Aurora Regional Fire Museum, and the several shops along Broadway.

Gift certificates to downtown restaurants and tickets to shows at the Paramount Theatre and The Riverfront Playhouse are also popular gift items for the holidays, Amoni said.