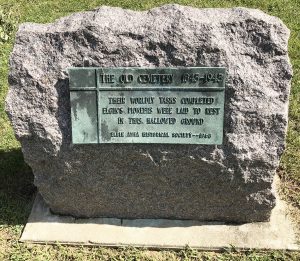 The elements recognize an unknown number of the city’s earliest residents whose remains were forgotten after being unceremoniously dumped in a mass grave more than 50 years ago.

They also salute a man who refused to let the dead be disregarded.

“During Steve’s research of Silent City he discovered that (when) one of the cemeteries — Channing Cemetery — got too filled up, the city started asking family members to move their loved ones to Bluff City Cemetery, which was just opening up, Many did, some did not,” said Laura Stroud, Steven Stroud’s widow.

“Then in the late 1960s, the city sold the (Channing) property to the school district and they, in turn, started digging a foundation to build Channing school. They found remains and (temporarily) just stopped everything.

“No one knew they were even there. And it disturbed Steve greatly.” 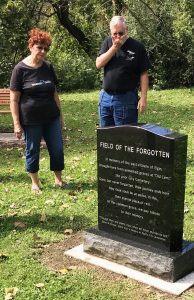 Laura Stroud (left) stands next to a black granite monument honoring early Elgin residents whose remains were transferred from Channing Cemetery and placed in a mass grave at Bluff City Cemetery. Laura Stroud is the widow of Steven Stroud, who pushed for recognition of Elgin residents seemingly forgotten after remains were moved. (Photo by Jack McCarthy/Chronicle Media)

When Steven Stroud died in April at age 76, enough money had been raised for a memorial to the people moved from Channing. Friends and associates added a park bench honoring him as a “historian, researcher and author.”

Channing Cemetery, also known as Old Cem, was located at the southeast corner of Channing and DuPage Streets, approximately one-half mile east of the Fox River. An original surveyor’s plot called for up to 12,000 graves, but one commemorative sign said it actually contained about 3,500 plots.

Now the site of Channing Elementary School and Channing Memorial Park, the cemetery opened in 1845 and remained Elgin’s main burial ground until Bluff City Cemetery debuted in 1889 in Cook County.

Most of those buried at Channing Cemetery were interred from the middle to late 19th century.

For families who could afford it, remains of loved ones were transported to the new grounds. An unknown number remained at Channing and burials continued there until 1906, according to a timeline from the Elgin Genealogical Society.

Channing Cemetery was officially closed in 1945. Two years later, the city declared all remains had been removed.

Or so they thought.

“From 1889 — when the new Bluff City Cemetery opened — until 1947, the City worked to remove all remains,” Steven Stroud wrote in Silent City. “Unfortunately, not all the remains were removed. When the foundation for Channing School was dug (around 1968) many remains were uncovered and taken to Bluff City Cemetery to be interred in a common grave.” 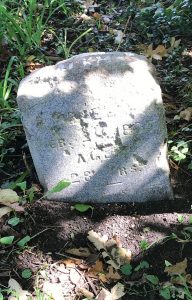 A compact, chipped monument marks the presumed final resting place of William Hackman, who died on Feb. 28, 1895. The marker is in a far corner of Channing Memorial Park, the former Channing Cemetery. (Photo by Jack McCarthy/Chronicle Media)

An archeological dig in 1999 found eight additional graves. And there may be even more underneath the school grounds and gently rolling Channing Park landscape.

“Some people who walk through the old cemetery grounds have felt an eerie presence and there have been stories told by custodians of hauntings in the school building at night,” Steven Stroud wrote in Silent City.

Today, it’s hard to picture a cemetery on the site. The elementary school and accompanying park is a focus of the neighborhood and the sounds of children at play echo throughout the six-acre site.

A lone burial monument remains in the far southeast corner of Channing Park. A chipped, compact gravestone is partially hidden among weeds and grass. It marks the presumed final resting place of William Hackman, who died on Feb. 28, 1895.

Along with remains, many monuments were transferred to Bluff City from Channing, including a main front gate, a holding vault and an entire military section, including a Veteran’s Monument.

The new Channing memorial at Bluff City calls the unmarked common grave “The Field of the Forgotten.”

“In memory of the past citizens of Elgin brought here from unmarked graves at ‘Old Cem,’ the prior city cemetery. Gone but not forgotten, their journey ends here. May their souls be at peace, in this, their eternal place of rest. At this common grave, we pay tribute to their memory.”

The 72-page Silent City book, also offers a history of 25 years of the Elgin Area Historical Society’s annual Cemetery Walks. It is available for $21 at the Elgin History Museum, 360 Park St.