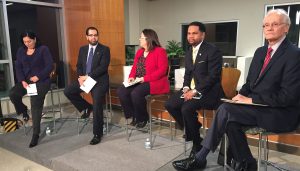 Four candidates for mayor of Aurora made their first joint appearance as they spoke before an overflow crowd at the Santori Public Library last week.

But they really needed no introduction in the first of seven scheduled forums over the next few weeks.

Three are veteran elected officials while the fourth is a longtime Aurora city executive.

And unlike recent national presidential campaigns, there was a welcome tone of civility and seriousness among candidates and several hundred persons on hand.

The field will be cut in half in a Feb. 28 primary with the finalists facing off in an April 4 election.
The winner will succeed Mayor Bob O’Connor, who wraps up a short tenure serving out the balance of the term of Tom Weisner, a three-term mayor who stepped down last year for health reasons.

Responses by each offered both a consensus on the importance  of economic development as well a pitch on how they’d apply their respective experiences and talent to the job of mayor of Illinois’ second-largest city.

“As a state representative we get to meet people at the federal level, at the state level and internationally,” said Linda Chapa LaVia, currently an 83rd District Democratic state representative and a legislator since 2003. “These connections I’ve made to bring resources back (can) make a better life for everybody.”

“I’ve spent my entire career in the executive branch of government,” Guzman said. “I’ve absolutely loved being in the mayor’s office the last 5-plus years — being able to see our city move forward and put together some of the biggest and most impactful projects that we’ve seen in recent history.”

Richard Irvin has been a presence in Aurora first as a community-based prosecutor and as alderman at-large for the past 10 years. He also ran for mayor in 2013.

“People want a rebuilt downtown, they want economic development and new revenue streams in the city to help keep taxes in check,” Irvin said. “They want good education on both our east side and our west side … (and) they want a safe city.”

Mike Saville has the longest record of government service of the four. He first served on the Aurora Planning Commission and was appointed to the City Council in 1985. Saville has been returned to office six times.

“What I do best is that after listening, I work to solve their problems,” Saville said. “I just don’t look for band-aid solutions, I look for long-term solutions. And I think that’s what our community is looking for.”

O’Connor, meanwhile, was an interested observer as part of last Thursday’s audience.

He will only serve until a new mayor is installed this spring. But as a candidate for reelection as alderman at-large, he’ll serve with one of the four candidates if successfully returned to office.

Mayoral candidates are scheduled to gather for a second forum at 7 p.m. Thursday at Pipers Banquets, 1295 Butterfield Rd, Aurora. Five additional debates are set through Feb. 15, according to reports.