In a fast-paced world full of mass-produced cars and advanced technology, many people find themselves feeling nostalgic for remnants of the past, for things that feel classic and authentic.

That’s always been the case for Randy Ross.

The Hampshire native grew up in an era when products were built to last, when the first car that you saved up to buy made a statement about who you were.

“I remember being a kid when we were driving down the road with my uncle, my brother and I would have a game where we would guess the make of the cars passing and what year,” Ross said.

“I was better than my brother was,” he added with a laugh.

Ross looked out the car window and dreamed of owning a late 1960s Camaro, or maybe a Mustang, but definitely something fast, he said.

“Today, every car looks the same,” he said. “So you can’t even play that game. It’s not worth playing it.” 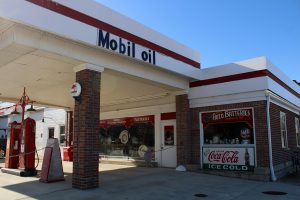 Randy Ross found a fitting home for his gas pump restoration business in the old Mobil gas station on the corner of State Street and Rinn Avenue in Hampshire.  (Photo by Kelli Duncan/for Chronicle Media)

As Ross grew older he never lost his love for that era of automobiles. Eventually, he got the ’67 Camaro that he dreamed of as a child.

“Now, you know, you buy today what you couldn’t have as a kid,” he said.

Ross also owns a 1952 Chevy pick-up truck and a 1935 Chevy Cruiser that he had painted to look like a hot rod.

But classic cars are just a sidelight to his main automotive interest— vintage gas pumps.

Driving down State Street in downtown Hampshire, Ross’s unassuming Gaspump Garage sits on the corner of State and Rinn.

Many cars pass by, never knowing the treasures that lie within.  Some even stop, looking for gas, and leave in frustration after discovering the handles of the antique Mobil gas pumps out front have been bolted down.

But take a closer look and eyes are drawn to the vintage gas memorabilia behind the plexiglass window or the 1949 Ford pick-up parked in front of the garage.

Upon entering Ross’s Gaspump Garage, visitors are transported to another era.

The space is filled with antique signs, old oil cans, vintage cars and, of course, gas pumps from every era, waiting to be restored to their former glory.

“We usually go through about 75 pumps a year,” he said. “We’ll end up buying people’s collections or one or two at a time.”

Ross said his inventory is the lowest it has been in a while, typically he has 20 to 30 pumps in his garage on any given day. Some are pumps that he has bought to restore and resell, but many others belong to customers looking to pay him for his restoration skills.

“Each pump has some kind of art to it and usually the customer decides that,” he said.

After an old pump is taken apart and gutted by Ross,  he passes it on to partner, Joe Filek, who rents space at Ross’s facility and owns Captain America Designs.

“[Filek] does any metal work or fabricating that he has to do and then he paints it and he gives it back to me in pieces,” Ross said. “And then I start putting it back together.”

Ross said he finds most of his customers on Facebook or connects with them at local auto and antique machinery shows.

“There’s a show in March in Peotone, Illinois and Des Moines, Iowa which is in August…and that’s just strictly gas pumps and memorabilia,” Ross said.

He does restoration work for a number of wealthy gas pump aficionados, some of them as far away as Switzerland and Holland, he said.

Nostalgia for vintage gas pumps extends beyond the big collectors they work with, Filek said. In more than six years of working side-by-side, they have restored pumps for restaurants, wineries and ‘man-caves’ alike.

“We have some people that just save up for them,” Filek said. “A lot of people want them to look old, so we actually distress them to make them look old too.” 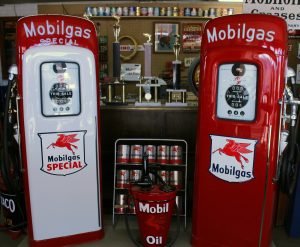 The 1950’s Mobil script top gas pumps that Randy Ross restored are one of the few things in his garage that he will never sell. They belong with the building which used to be a Mobil gas station, he said. (Photos by Kelli Duncan / for Chronicle Media)

Perhaps the most impressive, however, is the boxy wooden pump from the 1800s which, according to Ross, was used to pump cooking gas for homes.

Ross also has an extensive collection of hand-painted globes, which sit on top of the pumps illuminating the logos of old gas companies like Texaco and Sinclair.

“Indian Gasoline, that was Texaco in the twenties,” Ross said. “And then Mobil, that’s what this gas station is because that’s what it was in the 1930s and I remember it as that in the sixties.”

The old Mobil gas station provides a fitting home for Ross’s business. He said he never sells any of his Mobil pumps or memorabilia because he feels it would be a dishonor to the building’s history.

Ross said he has collected vintage oil cans and signs since the 1970s and, of course, has had an interest in cars for as long as he can remember.

“He’s in the Grundy Speedway Hall of Fame for the circle track,” Filek said.

It wasn’t until the 1980s that Ross became interested in collecting and restoring gas pumps, he said.

“I got into the pumps because there weren’t really many guys getting into gas pumps,” he said. “Probably because they’re pretty heavy.”

Each gas pump is around 300 to 400 pounds and must be moved with a dolly. Ross said the first pump he ever lugged home was a rare 1920s Roman Column gas pump which he bought over 30 years ago.

“I paid five-grand for it back in the day and my father-in-law thought I was nuts,” Ross said. “They’re worth thirty thousand dollars today.”

“My wife picked the color out because she said ‘if it’s going in my living room, I get to pick the color.’ So it’s an antique white,” he added, smiling at the memory.

What began as a hobby became an important investment opportunity when Ross lost his job in 2008. 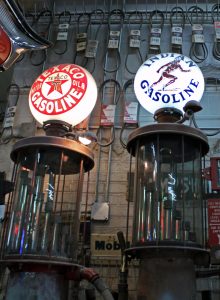 “I worked as a 150 (heavy equipment) operator and then when the crash came in ’08, this stuff never bottomed out,” he said. “It just kept rolling because collectors will find the dollar to keep collecting you know? And so I just turned my hobby into a business.”

“I started collecting my pension last year but this is still a good business,” Ross said. “Doesn’t feel much like work to me.”

Ross plans to continue doing what he loves until it no longer suits him. Filek, who runs a business doing auto body and paint work, will continue to supplement Ross’s talent with his creative flair.

“I’m starting to move away from restoration and body work because I want to focus more on paint,” Filek said. “I just enjoy this so much, the airbrushing and stuff.”

Filek said he recently took on a job painting carnival rides for a client in Marengo.

“The first one I did was the dragon roller coaster,” he said. “Then, I had four nine-foot elephants in here at one point.”

While brightly-colored carnival rides may initially seem out of place in Ross’s garage, the rides scratch the same nostalgic itch as the gas pumps — unearthing vivid memories of simpler times.