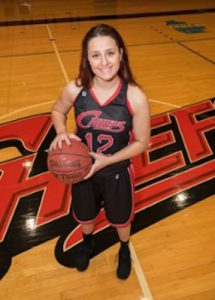 Basketball player Julianna Wadsworth was a unanimous choice as the Female Athlete of the Year. (Photo courtesy Waubonsee Community College)

The 10th class of inductees to Waubonsee’s Athletic Hall of Fame included former Aurora East basketball standout Phill Neal, who was the Chiefs’ first ever NJCAA All-American in 1971 when he finished third nationally in scoring with a 32.6 points-per-game average.

Neal, who now lives in Greensboro, NC, retired in 2014 after 38 years working for the General Dynamics Corporation and its’ two predecessor companies.

Also honored was former men’s cross country runner Dr. Kemp Schanlaber, who was a two-time All-Skyway Conference, All-Region and National Meet participant in the mid-1980’s. The Aurora West High School graduate went on to compete nationally in triathlons and is a successful podiatrist in New Hampshire.

Joining them was Aurora West High School graduate Amanda Wolf who was the Lady Chiefs’ all-time leading scorer in basketball the last 15 years. Currently a resident of Evanston, Wolf was a two-time All-Skyway performer, the Skyway Player of the Year in 2001 and an All-Region First Team selection.

Individual achievements as well as team accomplishments were recognized during an event in the college’s Academic and Professional Center as student/athletes from throughout the Fox Valley area and beyond were honored.

Men’s Soccer player Juan Ponce was named the Male Athlete of the Year. The midfielder led the nation in assists for most of the season before finishing second with 18 assists. The sophomore also tallied seven goals for a total of 32 points, tying him for 50th nationally in that category among all NJCAA Division I players

An Aurora native, Ponce was named an NJCAA Division I Third Team All-American, was chosen to the All-Region Champions Division squad, and was a two-time All-Illinois Skyway Collegiate Conference (ISCC) First Team selection. Ponce led Waubonsee to a 15-7 overall record and a berth in the Region IV semi-finals.

Basketball player Julianna Wadsworth was a unanimous choice as the Female Athlete of the Year by Waubonsee’s coaches after she became the college’s first two-time All-American on the court.

The sophomore finished as the Lady Chiefs’ all-time leading scorer with 1,211 career points and also set a new mark for points in a season with 628. Wadsworth also was in the top-20 nationally among all NJCAA Division II players in scoring, steals and free throw percentage. A two-time All-Region First Team selection, the 5’9” shooting guard helped lead unranked Waubonsee to consecutive Region IV Division II District B titles and back-to-back top-12 finishes at the NJCAA Division II National Tournament. Wadsworth was also tabbed the ISCC Player of the Year after helping the Lady Chiefs’ to an undefeated 14-0 league title.