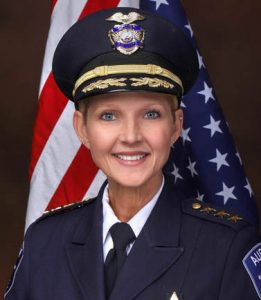 Aurora Police Chief Kristen Ziman initially expressed “disbelief” when members of the Chicago Police Board asked if she’d be interested in applying for the job of superintendent in the nation’s third largest city.

“My first response was of disbelief that I was being ‘vetted’ for a position that I didn’t pursue,” Ziman wrote in an April 1 Facebook post. “But I firmly believe that people see things in you that you don’t see in yourself. I feel immense gratitude and pride for being considered a worthy candidate.”

The initial contacts were made in December 2019. In January, Ziman threw her hat in the ring with a formal application.

“Mayor (Richard C.) Irvin was the first person I told that I was thinking about applying and in true Richard Irvin form, he said, ‘Aurora builds leaders’ and told me I had to go for it and that he would offer his unyielding support.

“Taking a risk is never a safe option, but for me, the safe option is almost always the worst option,” Ziman added. “I have come to understand that opportunities come in with the tide and sometimes you’ve just got to get on and see where it takes you.”

Ziman posted comments on the City of Aurora Facebook page after it was learned she was a finalist, but before Lightfoot made her decision.

Ziman expressed gratitude to work with “a team of extraordinary people” in Aurora and how the community embraced her and the department after the February 2019 Henry Pratt workplace shootings that claimed five lives and injured five Aurora officers.

“You have supported our police officers and professional staff through both our brightest days and our darkest hours,” Ziman wrote. “It was during the darkness that I fully understood what it means to be a part of a community. After our mass shooting, you wrapped your arms around us and that was what helped us heal.”

So why would the longtime resident with a lengthy police career here want to leave?

“In my quiet moments, I have asked myself why I would even consider applying for Chicago, which would catapult me into a place that is unfamiliar and uncertain,” she said. “I have searched my soul and the answer continues to be the same. The reason I get out of bed every day is because I love policing. My role as chief provides me the greatest source of happiness — to watch our officers continue the evolution to make our profession better and our community safer.”

Ziman also felt she had much to offer as a potential Chicago superintendent.

“I feel as though I can make a difference in Chicago by helping to unleash the skills and talent of the officers there,” she said. “There are so many professionals at CPD that have been unfairly painted with a broad brush of transgressions that are not theirs. I believe I have the passion and energy to meet the challenges that exist in Chicago I so I decided to pursue the opportunity.”

The Chicago position opened with last year’s departure of Superintendent Eddie Johnson, who announced his retirement in November 2019 effective at year’s end. Lightfoot later fired Johnson following revelations about his conduct after he was found asleep in a running car near his home.

A lifelong Aurora resident, Ziman joined the department as a cadet at age 17. She was appointed chief by the late Mayor Thomas Weisner in January 2016.

Ziman had also been in the news after a March 20 test showed she and her command staff had been exposed to the COVID-19 virus. Ziman and her staff began immediate an two-week self-quarantine period.

Irvin was also diagnosed with having the coronavirus and began his own self-quarantine at home.