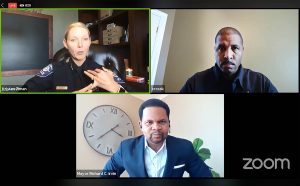 Keith Cross doesn’t know how he acquired the COVID-19 virus but he’s now well aware of just how debilitating it can be.

Cross, an Aurora Police Department commander, had the most harrowing experience of three city figures recently infected with a virus that has left serious illness and even death in its wake.

“I had a few days where I felt like I was OK, then things kind of fell off a cliff,” he said during a live online appearance on April 8. “I stopped eating for about four days, I just didn’t have an appetite, I couldn’t sleep for about three days, I had incoherent thoughts … I was confused.

“For a period of about three days I was very sensitive to noise and different things, so I basically stared at a wall from sunup to sundown and never went to sleep.”

Cross, now well on the road to recovery, was joined by Aurora Mayor Richard Irvin and Police Chief Kristen Ziman. Each related their respective coronavirus experiences for the online audience.

They also urged continued compliance with Gov. J.B. Pritzker’s orders for Illinois residents to stay home and practice social distancing if they go out. Pritzker also closed schools and businesses as part of the strategy to slow the spread of the disease.

“This is really serious,” said Irvin. “Oftentimes you see the news and media and it’s hard to put it in perspective, it’s hard to put a face with it because maybe you or family members haven’t experienced it yet. But I think all three of us who have all been diagnosed and come through recognize that this is real.”
None of the three were hospitalized although Cross had two emergency room visits during his ordeal.

Irvin, meanwhile, shared some of Cross’ medical issues. Ziman suffered less significant but still serious symptoms that left both out of commission.

Ziman was cleared last week by health officials to return to work. So was Irvin, who said he’d still wait a few more days before resuming public activities to ensure he wouldn’t inadvertently spread the virus. Cross said he’s still a few days away from a medical OK.

During a 50-minute appearance conducted via a teleconferencing application, each offered their personal COVID-19 stories.

A subdued Irvin was still clearly under the weather as he oversaw Aurora’s first-ever remote City Council meeting on April 1. One week later, he appeared much improved and in considerably better spirits, smiling and joking as he related his story.

“I was feeling odd symptoms,” he said. “One of the reasons we made a point to get tested was because (Cross) tested positive.

“The reality is we don’t know for sure if we contracted the virus from (Cross). It could have been that we had it or I had it and gave it to you or when you had to travel to New York to get your son from college. Who knows?”

It would take a week for Irvin to get results, but the virus didn’t wait.

“Not long after I took the test I went downhill,” he said. “I had an extreme headache, to the point where I couldn’t even think straight. If I stood up, I would get dizzy. I had incoherent thoughts. … I had absolutely no appetite. I didn’t eat for seven to eight days straight. Water was even nasty to me.”

At one point Irvin started feeling better and even got up and worked out.

“I thought it was over and it came back even stronger.”

Ironically, Ziman may have been exposed to the virus during a command staff meeting called to consider police response to the growing COVID-19 threat.

“We all got together early on,” she said. “The first thing we talked about was protecting our police officers, protecting our firefighters and EMTs (and) protecting all of our citizens. In that planning process we (may have) infected ourselves.”

Ziman had the least severe symptoms. But there were still some difficult days as she went through a quarantine period.

“It started as a head cold,” she said. “I ignored it (but) my symptoms started to progress … to fever and a cough. I never got it as bad in my respiration and my chest. I didn’t have trouble breathing. Mine was just cough, chills and fever. … I had a very mild case.”

Cross, in line for promotion to deputy chief later this spring, was hit hardest with severe symptoms. One four-to-five day stretch was particularly alarming.

“I started out with a little cough and thought I was coming down was a cold because my body was run down,” he said. “I felt really tired, so I just tried to power myself through.”

The next day was similar but then dramatically changed that evening.

“I went to bed around 7 o’clock and woke up around 9, 9:30 and felt like a truck had hit me. I was vomiting, I had fever (and) a fierce headache. The only thing I didn’t have going on was the respiratory distress.”

Cross went to the emergency room and was tested for the flu, which turned up negative. A coronavirus test was not available at the moment, but he tried again two days later and it showed he had the COVID-19 virus.

Conditions then worsened and included another emergency room trip to address potential dehydration.

“I basically laid in my bed really not being able to do anything for about three or four days,” he said. “There were a couple of other rough days after that before the curve started going the other way.”

As of last week, Illinois had more than 5,000 COVID-19 cases while Aurora had nearly 150 cases and four reported deaths.

But Irvin also sounded a positive note even as the coronavirus infections continue to rise.