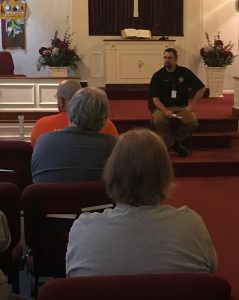 It goes off at this time every evening and it serves as your cue to move into action.

It’s a routine being promoted by the Kendall County Sheriff’s Department, which detailed its initiative to Boulder Hill residents Sept. 10 during the community’s Neighborhood Watch Meeting at Church of the Brethren, 155 Boulder Hill Pass.

Drawing about 20 residents, Deputy Dan Briars was on hand to answer questions, dole out tips, and provide intel on issues impacting the unincorporated subdivision — namely a shooting that occurred during the early morning hours of Sept. 8.

On that day at approximately 6 a.m., deputies raced to the area of Circle Drive West and Scarsdale Road, unincorporated Montgomery, for a report of shots fired. Upon arrival, they learned no one had been struck or injured, and later determined that the isolated incident posed no public threat, Briars said.

That assurance, however, wasn’t enough for some residents who, as a result of the shooting, now feel unsafe in their homes.

“Our concern is when we’re out walking our dogs out that early in the morning,” one meeting participant lamented. “That’s just too close to home for me.”

Another woman, who said she could see the targeted home from her front porch, called the incident “disconcerting”.

Briars said that the incidents, while presumed isolated, do not mean there’s not potential for injury to others in the area. Nothing he’s heard, however, indicates the shootings as random acts of violence. A recent home invasion also appeared to be a targeted incident, he noted.

In the last month, there were 168 calls for service, 181 traffic stops and 25 attempts for civil process in Boulder Hill. But beyond these calls, residents had other concerns as well. 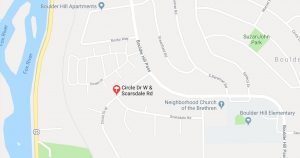 An early morning shooting on Sept. 8 in the area of Circle Drive West and Scarsdale Road, unincorporated Montgomery, is the most recent incident causing residents in the area to be concerned about crime. (Google map)

Other participants complained about the graffiti around town, often left on stop signs and utility boxes for weeks or months before being cleaned up. One speaker said this lack of speed in getting the spray paint removed lets vandals essentially “win”.

“They’re allowed to infiltrate our neighborhood,” he said.

Briars noted that while there is a gang presence in Boulder Hill, there is not a gang war, nor gang turf merging into the community.

“In general, however, if you do see something that doesn’t seem right or looks suspicious, or raises a red flag for you, give us a call and let us know,” he said.

Briars also encouraged residents to get cameras on their homes, whether they be Ring doorbell cameras or other similar brands. The small, but efficient, cameras are great assets to deputies when trying to solve crimes.

“We do canvas areas to try and gather as much video as possible,” Briars said. “But if you have a camera or know someone who does, if you could make that available to us it would be most beneficial. Having a network of people who have cameras and are willing to reach out to us and share their footage with us is a big help.”

An anticipated Sheriff’s Department Sub Station, which will find a home in a newly purchased township building on Boulder Hill Pass, will add another layer of protection for residents seeking additional law enforcement presence in the area. The goal is to get this operation underway within the next three months, according to the sheriff’s office.

Anyone with information about local crime or the recent shooting is requested to contact the Kendall County Sheriff’s Office Investigations Unit at 630-553-7500, ext. 1105.

Individuals can also provide information and remain anonymous by contacting Crimestoppers at 630-553-5999.

The Kendall County Sheriff’s Office Investigations Unit is currently investigating this shooting incident, and more information will be released as it become