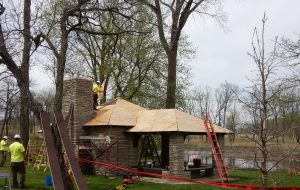 In DuPage County, the south Herrick Lake Shelter, built by the Civilian Conservation Corp. in 1937, is undergoing repairs and renovations. The building hasn’t seen any repair work since the mid-1990s. (Photo courtesy of Forest Preserve District of DuPage County)

Installing a tunnel under the Union Pacific railroad in South Elgin to connect to portions of the 43-mile Fox River Trail that runs from Algonquin to Oswego is just one of several projects the Forest Preserve District of Kane County has on the books for 2020.

“Right now, the trail is disconnected because the Poplar Creek bridge swept away due to

floods,” according to Ken Anderson, chief of planning and operations of the Forest Preserve District of Kane County.

With this section of the trail closed, it left a significant gap in local and regional connectivity, according to documents from the Forest Preserve District of Kane County.

The work, which has been discussed for many years, includes taking a 12-foot metal pipe and pushing it under the railroad to create a path, he added.

“Hopefully, by September or October that project will be done,” Anderson said.

Each spring, the forest district also resurfaces “about a mile of trail.”

Other work includes a drainage project at the Big Rock campground after some previous flooding, he added.

“We are working on a redesign of the boat landing, parking lot, and shelter on the south side of Lake Patterson,” he said. 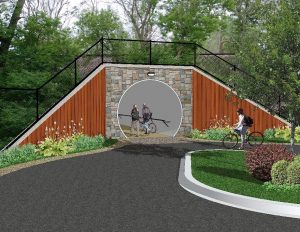 Recently, working with the Illinois Department of Natural Resources, a causeway was removed that connected from the west side of the Fox River to the island at Fabyan Forest Preserve, according Anderson.

“Now the Fox River flows freely through Fabyan Forest Preserve on both sides of the island,” he added.  “We restored the river to what it was pre-settlement days which is good for the environment.”

“As part of the same project, we re-installed the bridge from the island to the west bank,” Anderson said.

Colonel Fabyan had a bridge there, he explained, that became unsafe for people to use.

“We took it out 10 years ago, and now it has been replaced with a modernized-steel bridge,” he added.

Kendall County Forest Preserve District Executive Director David Guritz said they are currently working on a restoration project at the Hoover Forest Preserve “to remove some of the aggressive species and diversifying the types of plants that are found there.”

“This tied in well to recent information that we have federally-endangered bumble bees present at Hoover,” he added.  “They are an important pollinator and their population has declined 90 percent over the last three decades. A lot of our efforts there have been helping them out by giving them more food sources.” 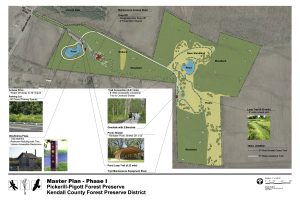 Purchased in 2015, the 100-acre property had been in farm production.

“We have re-seeded 60 acres to prairie with wildflowers and grasses including cover crop seed that includes plants which take off quickly and provide shade and soil moisture protection,” he added.

Thirty-thousand tree seedlings will be planted on the other 40 acres this spring, Guritz said.

Later this year, the Kendall County Forest District is gearing up for the opening of the 100-acre Pickerill-Pigott Forest Preserve in Yorkville.

“A larger section of the trail goes to the top of a glacial moraine that overlooks the Oswego channel valley. It is a really pretty view,” he added.

The district is also gearing up for the removal of the Millbrook Bridge, Guritz added.

Built in 1897, the Pratt truss span bridge was used for vehicular traffic until 1984 when it was replaced downstream.

“It has been completely closed since 2015,” he added.  “It is one of those situations.  We would love to be able to keep it, but it hasn’t been kept up and it has engineering structural issues.  It was going to be between $1 to $2 million or more to fix it up and stabilize it.”

Kevin Horsfall, manager of planning with Forest Preserve District of DuPage County, said, “We are renovating and restoring the picnic pavilion at St. James Farm so that we can continue to host programs, volunteer workdays, and wedding receptions.”

The picnic pavilion at the 600-acre St. James Farm Forest Preserve in Warrenville is one of the DuPage County’s most often reserved picnic shelters.

Later this spring, the pavilion is undergoing a renovation that includes the replacement of the cedar shake roof with an asphalt shingle roof; repairing posts and foundations to stabilize the structure; connecting both sides of the pavilion with a covered roof to protect from weather; adding a permanent grill patio to the south shelter; and providing benches and a level lawn area to support recreational games such as horseshoes, bean bags, and bocce ball. 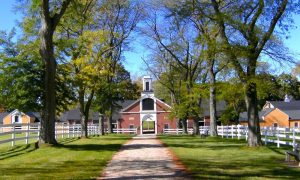 Originally built in 1984, the shelter has “reached the end of its useful life,” Horsfall added.

The district has allocated $155,000 toward this project.

As part of a 10-year $10 million master plan, we have been trying to add amenities and improve public access, Horsfall said.

First constructed between 1936 and 1937 by the Civilian Conservation Corp., the south Herrick Lake Shelter in Warrenville hasn’t seen any repair work since the mid-1990s.

Work began on March 2 and is expected to be completed by May, according to Jason Berger, facilities manager with the DuPage Forest District.

“Select beam, rafter and decking have to be replaced due to years of service and water infiltration from many years back, much dating back before the 1990s,” he said.  “The goal is to get this structure as close to 100 percent serviceability that will allow for another 100-plus years of existence as a historic and cultural monument, while serving as a functional asset to the Preserve users and taxpayers of DuPage County.”

Similar work on a sister shelter to the one at Herrick Lake was completed at the McDowell Grove Shelter in Naperville in 2017, Berger explained.

Keep up to date on program status

Due to the outbreak of the COVID-19, forest preserve programs have been canceled and centers closed. However, at press time, the forest preserves themselves are open for residents to fish, birdwatch, and walk on trails from sunrise to sunset.

More information can be found at: