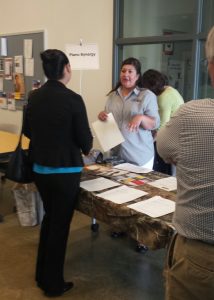 A job applicants talks with potential employer at the June 24 job fair at Waubonsee Community College’s Plano campus. The fair, which was one of three recently hosted by WCC, focused on IT and computer jobs. Other fairs focused on careers in health care and manufacturing. (Photo by Erika Wurst/ for Chronicle Media)

For 30-year-old Auroran Daniel Haas, the job search has been a trying one.

Like thousands of others trying to enter the work force, or change careers, Hass was out hitting the pavement Friday morning at Waubonsee Community College’s Plano campus, where the last of three weekly job fairs was held.

“I’m thinking about entering the computer support program” at Waubonsee, Hass said. He left a career in the restaurant industry to pursue his passion surrounding all things IT.

Since then, he’s gone to several career fairs, hoping to get his future kick-started and his career off the ground.

“I don’t want to work in a restaurant my whole life,” Haas said. “I’m a firm believer that you get what you put into (a job search). You’ve got to be aggressive and pound the pavement.”

Other job seekers had the same idea on Friday as they came with pantsuits, ties and jackets. With their resumes in hand, the applicants went from booth to booth touting their skills.

The college held separate fairs over the last several weeks for manufacturing careers, healthcare careers and IT careers.

“They’re mini job fairs,” Clark said, “They’re held to build relationships and get your foot in the door.”

But, he also told applicants about the wealth of job search material available on the WCC website.

The WCC job board, at www.collegecentral.com/waubonsee, has between 70 and 80 new jobs uploaded to it each month. It’s a place where people seeking all kinds of work can go to find the resources they need.

With mid-level and entry positions, as well as internships, the postings have a little something for everyone, he said.

“These are individuals looking to hire,” he said. “You have to act fast.”

On Friday, June 24, the trend continued as participants filed in and out of the Plano campus.

There were applicants returning to the job field, and some looking to enter it for their first time. And, then there was Haas, who was looking to change his career entirely.

“At times it can get disheartening,” Haas said about the job search. He said it’s not uncommon to hear stories from people who have been searching more than two years for a job.

Clark said he’s got plenty of resources for those looking to hit the ground running. Freshen up your resume and cover letter skills, work on your LinkedIn presence, and join the job board by visiting www.waubonsee.edu/careerdevelopment for a list of future opportunities.