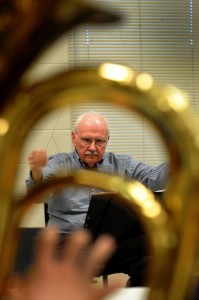 Dick Hart has been director for six years but with the band since its start 30 years ago. He directs the members during an Indian Valley Community Band rehearsal at Sandwich Middle School on Monday, April 4, 2016. Photo by Steven Buyansky

When Deb Kell graduated from Sandwich High School back in the 1970s, she quietly put her music days behind her.

Her flute, which she had played for years, got tucked away in her closet for more than three decades before Kell decided to open its case and breathe life back into the instrument.

In a small band room inside Sandwich Middle School where the Indian Valley Community Band meets every Monday, instruments of all kinds are brought back to life as the band’s 40 members practice.

“You don’t have to be an accomplished musician to be in the band,” Kell said. “We gratefully take rusty musicians, students and retirees. It’s a fun way to get back into playing an instrument again rather than have it sit in your closet.”

The IVCB is made of of musicians ranging from high school students to members in their 80s. They come from 11 different local communities, including Sandwich, Somonauk, Plano, Yorkville, Newark, Cortland, Sheridan, Sugar Grove, Montgomery, Plainfield and Aurora. But, Kell said, the band wasn’t always what it is today.

Thirty years ago, in 1986, three former Sandwich band directors, Paul Rossok, Terry Wickwire and Joel Hawkinson, placed an add in the local newspaper seeking community band members who wanted to continue to play past their high school and college years. Since then, the band has only grown.

Rossok, Kell’s former high school band director, was at the helm of the band in 2008 when Kell decided to join the IVCB.

“It was like going back in time to my high school days,” Kell said. “It was pretty wild, but a lot of fun for me to be able to play with him.”

Kell also gets to play with five of the band’s original members, who have been a part of the ICVB since its inception 30 years ago. Those members are Sandy Black, Donna Hutson, Jean McBride, Carol Pruski and Carol Swenson. 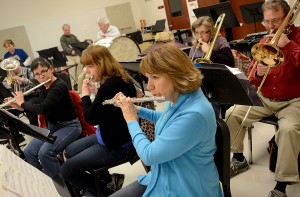 Sandwich High School alum and flute player Deb Kell appreciates the opportunity the Indian Valley Community Band provides for her and others to continue their musical interests and talents. Kell serves as secretary and treasurer. (Photo by Steven Buyansky/for Chronicle Media)

Kell is also joined by several husband and wife duos who play together with the band every Monday evening, as well as dozens of other music lovers.

Which is exactly what happened to her 8 years ago when she started with the IVCB.

“I really had to practice,” Kell said of rejoining a band. “I went back and started taking lessons again, which is different when you’re an adult. It’s a lot more fun.”

And, although she had some reservations — she said she was worried about whether or not she’d be able to remember to play — the experience has been nothing but relaxing and fun.

The band’s current director, Dick Hart, took over Rossok’s spot in 2011 and has been leading the band since.

“Mr. Hart is wonderful,” she said of the band’s leader. “He keeps everything light-hearted. He has so much knowledge about the history of some of the songs we play.”

The music, which is purchased from local middle schools using member’s $10 yearly dues, is practiced and then performed during several concerts throughout the year. The concerts are a way for the band to raise money for local agencies. 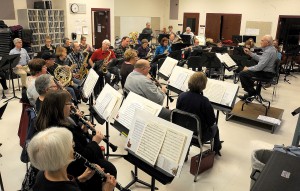 This year’s spring concert, which will take place on Sunday, April 24 at 2 p.m. at the Sandwich Opera House, 140 E. Railroad St., will benefit the Fox Valley Older Adult Services.

“With no budget passed in Illinois yet, and the funding crisis, this organization that provides wonderful and much needed services to area senior citizens is in dire need,” Kell said.

Last Spring, the band raised just under $800 to help with restorations to the Sandwich Opera House.

In addition to the spring concert, the band also hosts a holiday concert at the Opera House to kick off the Franklin Mall Christmas Food Drive. Smaller ensembles created by members play music at libraries, hotels and events around their communities. The band closes out its season in June with an outdoor concert.

Kell said she encourages anyone who is interested in joining the band to attend practice every Monday from 6 to 7:20 p.m. in the Sandwich Middle School band room, 600 Wells St., Sandwich. 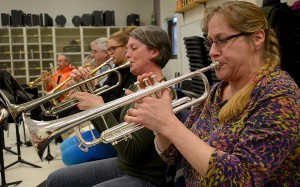 “There are no auditions, and even rusty musicians are welcome to come sit in and play along with us,” she said. “For me, it was 35 years that I left my instrument sitting in the closet before I started playing again.”

Admission: Event is free; Donations to FVOAS are accepted.