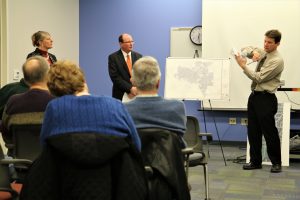 Local residents got their yearly construction update on March 16, thanks to State Rep. Stephanie Kifowit, D-Oswego, who invited representatives from the Illinois Tollway, Illinois Department of Transportation and the City of Aurora to speak about their respective projects.

The event, held at the Aurora Public Library Eola Branch, was a way for Kifowit to put residents in touch with experts they might not normally get to speak with, she said.

“We host a construction update every year,” Kifowit said. “It’s part of our initiative to keep residents informed and to allow access to information. They can learn where to drive, where not to drive, and about how long construction will be going on so they can plan their summers.”

About 15 people showed up to the presentation where they learned about roadways and intersections throughout Kane and Kendall counties.

City of Aurora Public Works Director Ken Schroth spoke about the Eola Road widening project, which is in its final phases. Landscaping should be finished, and all walls should be up within the next couple of months, he said.

The Farnsworth Interchange was also a topic of conversation.

Clarita Lao, deputy chief of Program Implementation at the Illinois Tollway, said they’ve been talking with residents often and coordinating to make sure the interchange consists of the safest configuration to minimize backups.

The interchange should be open in November.

Kendall County’s dangerous Route 30 and Harvey Road intersection has plans to be corrected, as well.

“That’s going to be a lot safer of an intersection,” Kifowit said. “These are all projects that people need to know about. Part of my goal is to be accessible and to bring information to the community and to reach out to the public.”

Residents were also afforded the opportunity to provide feedback about current roadway conditions and recommend areas of improvement.

“Sometimes I think people might not know who to call when they have concerns,” Kifowit said. “Residents can always call my office and we can forward their information to the appropriate people.”

In addition to making roadways safer, Kifowit said the construction projects are also helping bring jobs to the area.

Last year, Kifowit supported House Joint Resolution Constitutional Amendment 36, which amended the Illinois Constitution to require and fees collected from the Motor Fuel Tax to only be used on road projects.

The amendment was approved by voters last November and was backed by both business organizations and labor groups.

“Preventing Motor Fuel funds from being misused will help ensure Illinois’ roads and bridges are kept safe for our families,” Kifowit said. “This measure will also create thousands of construction jobs across the area and help attract businesses to Illinois by maintain our robust transportation system.”

To stay updated on where area road construction projects are taking place, residents can visit www.aurora-il.org/construction and www.gettingaroundillinois.com/gai.htm.