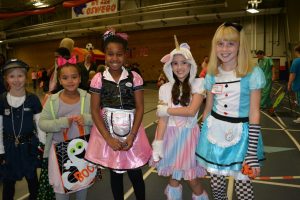 Aurora police are investigating burglaries at two different T-Mobile cell phone stores that occurred just 24 hours apart on opposite ends of the city.

Police said that at around 1:40 a.m. Thursday, Oct. 4, at least three men forced their way into the T-Mobile store in the 300 block of W. Indian Trail and stole more than $6,200 in merchandise. There are no further descriptions of the suspects.

Then around 1:35 a.m. Friday, Oct. 5, someone burglarized the T-Mobile in the 2900 block of Kirk Rd., stealing almost $6,000 in merchandise. There is no information on the number of suspects or their physical descriptions.

According to Aurora police, the two cell phone store burglaries in Aurora are part of several similar incidents in surrounding towns, all of which are probably related.

Jeff Ford is the new director of the Indian Valley Community Band.

An accomplished saxophonist, Ford played at the band’s Spring Concert this past April so he is well acquainted with Indian Valley Community Band. He is owner of Jeff Ford Woodwind Repair, located in Oswego, and was the jazz band director at Waubonsee Community College for 29 years.

IVCB is looking for additional instruments to round out the group. Percussion, tuba, saxophone, trombone, horns of all types, low woodwinds, flute or clarinet, no matter what instrument you play IVCB has a spot for you.

Stop in at any rehearsal to check out this all volunteer group that enjoys making music. Follow on the Indian Valley Community Band Facebook page or phone 815-786-6752 for more information.

Indian Valley Community Band is currently rehearsing for a holiday concert to be performed at the historic Opera House in Sandwich on Sunday, Nov. 25, at 2 p.m.

Pickens and Siegmeyer will be paired with an experienced field training officer and will undergo a rigorous 14-week field training program, designed to put the knowledge acquired in the academy into practical use.

Pickens attended Illinois State University where he earned his bachelor’s degree in criminal justice and minor in psychology. Prior to his employment with the Kendall County Sheriff’s Office Deputy Pickens completed an internship with Naperville Police Department.

Siegmeyer attended Southern Illinois University where he earned his bachelor’s degree in political science in international relations. Prior to his employment with the Kendall County Sheriff’s Office, Siegmeyer worked as a corrections officer for the Cook County Sheriff’s Department.

Looking for a fun way to get some extra use out of those Halloween costumes this year? Look no further than The Oswego Park District’s Monster Mash Bash, held from 2-4 p.m. on Oct. 27 in the Oswego High School Field House.

Get your face painted to match your costume, jump in the bounce houses, or win a prize in a tricky game. Admission is $5 at the door and adults get in for free!

Teens are also encouraged to volunteer at the Bash for community service hours. Have fun, give back, and earn credit.

The Oswego Senior Center announces sponsorships and tickets are available for the fall fundraiser that will help support their programs for area seniors.

“The Fountain of Youth” will be held on 7-10 p.m., Friday, Nov. 2 at Whitetail Ridge Golf Club in Yorkville. The event will be casual dress, full of raffles and entertainment along with plenty of appetizers and dessert spread. Tickets are $25/person.

This year’s event is a throwback to the 1950’s era night club circuit when the Rat Pack ruled the roost. The event will feature nostalgic music by widely renowned Peter Oprisko, crooning to Frank Sinatra favorites. Also, performing, will be a roving street magician/mind-reader Jacob Mayfield engaging the crowd with his sleight of hand.

Sponsorships are plentiful and feature multiple tickets to the event, advertisement in the program and other media depending on the sponsorship level:  $1,000 Frank Sinatra, $500 Dean Martin, $250 Sammy Davis and $100 Joey Bishop.

For ticket or sponsorship information, contact Chairman Dave or Peggy Krahn at Krahn.peggy@gmail.com or call the Oswego Senior Center at 630-554-5602.  Tickets are also available online at www.oswegoseniorcenter.org under Events.

Yorkville High School student Joshua Slavin is one of 13 new members of the 2018-19 State Board Student Advisory Council. The council provides diverse student perspectives on Illinois education issues and has a front-row seat to observe how the State Board formulates policy. The council will research and present to the State Board on topics affecting students’ success in Illinois.

Additionally, the council will continue to develop the Student Voices microsite that provides space for students to ask and answer questions, and access resources about preparing for college and career.

“Every year I am more and more impressed with the creativity and dedication the Student Advisory Council brings to the State Board,” said State Superintendent of Education Tony Smith, Ph.D. “I admire these young people for taking the initiative to help shape Illinois’ education system to benefit their peers and communities. I look forward to getting to know this year’s council members and hearing their ideas.”