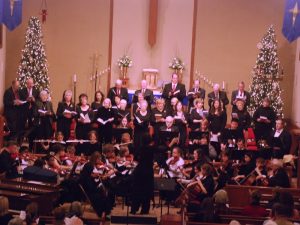 The Fox Valley Philharmonic Orchestra and the Aurora Community Chorale, under the direction of Stephen Thurlow and Kristin Young, open the holiday season with a free-admission concert on Sunday afternoon, Dec. 9, at 3 p.m.

The concert will be held at Our Savior Lutheran Church, 420 West Downer Place in Aurora.

The centerpiece of the concert will be the orchestra and choir performance of selections from Joseph Martin’s Christmas cantata, Tapestry of Light. The work is filled with tuneful English folksongs and lively Celtic rhythms, rich choral sonorities accompanied by sparkling instrumental orchestration.

Additional works to be performed are the Steamroller instrumental arrangement of Gruber’s classic carol, “Silent Night” and Holt’s “Fantasia on the Dargason”, which contains a clever juxtaposition of the rustic, foot-tapping country dance tune with the gentle, lyrical folk song melody, of the English carol, “What Child is This” (aka Greensleeves).

The concert will conclude with audience participation in a sing-along with the orchestra and choir performing several well-known traditional Christmas carols. There will be a reception with refreshments will after the concert.

Again admission to the concert is free, although an appeal is made for free-will, tax-deductible donations to help with partially defraying concert expenses. Parking is available behind the Our Savior church, with access on Garfield Avenue.

With the holiday shopping season here and the ever-increasing popularity of online shopping, package thefts are sure to go up over the next several weeks.

Just like reducing burglaries from motor vehicles, take the opportunity away from thieves by scheduling any package deliveries for times when someone is home to accept them or asking a trusted neighbor to receive the merchandise.

You can also take advantage of services offered by some delivery companies that include delivery time windows or package delivery notifications via text. Still others accept special instructions including delivery to a back porch.

One of the most important suggestions is to keep an eye out for suspicious persons or behaviors in your neighborhood and encourage your neighbors to do the same. Pay special attention to when a delivery truck is in your area.

Many thieves follow these trucks and steal packages within minutes of their delivery. If you see something suspicious, call 911 immediately.

If possible and it doesn’t put you in danger, encourage residents to take a video or picture of any suspicious persons or vehicles with their cell phone. These types of videos and photos close the gap of our response time because frequently, criminals have left the scene by the time we arrive.

The pictures and videos depict real-time proof of a crime being committed and offer valuable evidence. Police warn to never attempt to intervene or apprehend a criminal yourself.

Kendall County State’s Attorney Eric Weis announced that Dakota Dunstan, 23, of Minooka was sentenced to eight years in the Illinois Department of Corrections by the Judge Robert Pilmer for unlawful delivery of a controlled substance as part of a negotiated plea agreement this past week.

According to Weis, Dunstan was arrested by the Kendall County Cooperative Police Assistance Team in February 2017 after an undercover police officer purchased LSD from Dunstan and his co-defendant, Adrianna Medlin of Joliet.  Medlin received a similar eight-year prison sentence

previously in a negotiated plea agreement.

According to records, Dunstan has two prior convictions for drug deliver out of Will and Grundy counties and was sent to prison on those charges in 2015.

Weis praised the efforts of KCPAT in their continued mission to combat the distribution of illegal substances in the Kendall County area.

“While heroin continues to be a scourge upon on the community, we won’t turn a blind eye to

the other illegal narcotics that are distributed by dealers in Kendall County,” Weis said.

Dunstan will have to serve three years of mandatory supervised release, previously

known as parole, after he serves his full sentence. 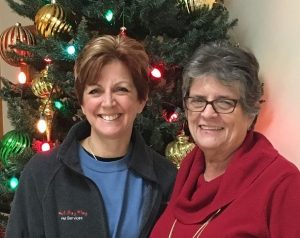 Fox Valley Older Adult Services (FVOAS) will be the recipients of proceeds from fundraisers sponsored by Essential Bed and Mid-Day Play.

This event is sponsored by the famous Essential Bed Co. Bring a non-perishable food item for the Franklin Mall Project and Essential Bed will pay for your sales tax. These quality pillows make great gifts.

Bring your pooch to FVCC on Saturday Dec. 8 from 12-3 p.m. and have a picture taken with Santa, just in time for the Holidays. The generosity of both these businesses along with many donors has enabled FVOAS, for the past 46 years, to help seniors continue to live vital and independent lives. FVOAS and its partner, Voluntary Action Center (VAC), assist thousands of seniors in DeKalb, Kane, Kendall and LaSalle counties. For more information, call, 815-786-9404 or stop by the Fox Valley Community Center for a personal tour.

Students had the incredible opportunity to hear the story of how the yearbook staff at Marjory Stoneman Douglas High School captured the events of February 14, 2018, in the 2018 Aerie yearbook- presented by advisers and MSD English teachers Sarah Lerner and Melissa Falkowski.

Students and staff benefited from networking and sharing commonalities and stories with others and felt connected to the six thousand student journalists who share their passions and interests.

Students learned to travel the Metra, became immersed in the creative process behind “Saturday Night Life’ at the Museum of Broadcast Communications, and learned the ins and outs of safe traveling and navigation in a city.

Chapel on the Green Christmas Village

The Chapel on the Green in Yorkville will be hosting a Christmas in the Village display over four consecutive Sunday afternoons.

The displays will feature the popular Department 56 porcelain houses and business buildings and accessories of both the Original Snow Village and Dicken’s Village collections. Some one hundred items will be displayed in three rooms.

There is no charge for the events, however donations towards Chapel preservation efforts would be appreciated.

Mooseheart lights up for the holidays

Holiday Lights at Mooseheart is one of Chicagoland’s largest light displays. The lighted route is approximately 1.8 miles and has more than 80 lighted displays to view.

For six nights this year —Dec. 8-9, Dec. 15-16, and Dec. 22-23 —the $10 admission price (per vehicle) includes not only the Holiday Lights show, but also a chance to see Santa Claus at the Mooseheart fieldhouse.

Santa will sit for free photos starting at 5:30 p.m. and the line will be shut at 8:30 p.m., with those in line still allowed to see Santa.

In addition to Santa Claus, the fieldhouse will also be a place where children can enjoy crafts, holiday music, hot chocolate, and Christmas cookies.